An important date in NHL history passed last Friday without anyone I’m aware of noting it. Okay, admittedly, the 97th anniversary of anything is a clunky number to celebrate, but just three weeks after the league played its first games the NHL made a very significant rule change. Without this change, the Buffalo Sabres probably wouldn’t have been honoring Dominik Hasek last night by retiring his number…

As the Toronto Star reported on January 9, 1918, “When Canadiens meet Torontos tonight in the NHL game at the Arena the hockey public may see Harry Holmes, the Toronto net guardian, standing on his left ear and nonchalantly booting high ones over into the corner, or Vezina, the French-Canadian wizard, sitting on the top of a goal post and batting them out like Larry Lajoie hammering out a two-sacker at the Island last summer. Anything but murder and an Ostermoor mattress goes in the nets in the pro league from now on.” 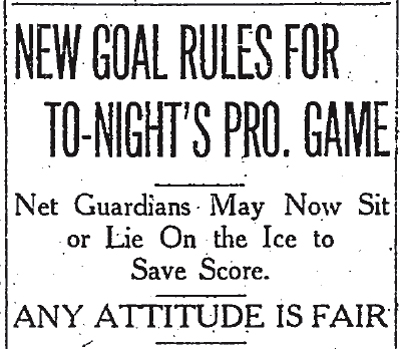 Until that day, professional goalies in eastern Canada had been required to remain standing in front of their nets at all times. They faced a penalty if they flopped to the ice to make a save. On January 9, 1918, NHL president Frank Calder sent a telegram to referees Lou Marsh and Steve Vair prior to the Toronto-Montreal game advising them that, “Section 13 and that portion of section 9 dealing with the goalkeeper are hereby deleted, thus permitting the goalkeeper to adopt any attitude he pleases in stopping shots.”

Out west, in the Pacific Coast Hockey Association, brothers Frank and Lester Patrick had already dealt with this injustice. “A goalkeeper should be allowed to make any move he wants,” said Lester Patrick, “just like the rest of us. He should be allowed to make the most of his physical abilities.” In his biography of the Patricks, Eric Whitehead indicates that this rule change was made during the first PCHA season of 1911-12, but Craig Bowlsby (who has meticulous research to back it up) writes in his 2012 book Empire of Ice that the Patricks didn’t actually introduce the rule officially allowing a goalie to stop a shot any way he pleased, except by throwing his stick, until the 1916-17 season. 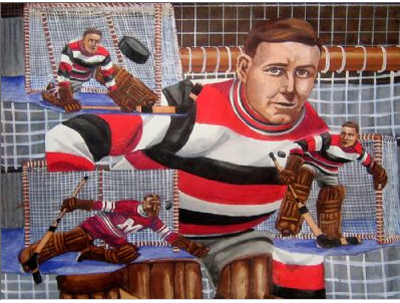 Clint Benedict, star goalie of the Ottawa Senators, who’d perfected the knack of “accidentally” falling to the ice to make a save, is usually credited as the inspiration behind the rule change in the NHL. However, in the Toronto Star on January 10, an unnamed columnist (perhaps Star sports editor William Hewitt, father of Foster) had a different opinion.

“Montrealers certainly run this NHL to suit their own sweet selves. Yesterday they calmly announced a change in the playing rules allowing the goalkeeper to assume any attitude in goal to stop a shot, yet the first paragraph of the constitution says that the playing rules may only be amended at the annual meeting. Did somebody say National Hockey League? They should call it George Kennedy’s league [Kennedy owned the Canadiens] and be done with it. The French-Canadian mogul gets everything he wants from soup to nuts.”

Georges Vezina, it’s been said, was never much of a flopper, but whoever it was that pushed for the rule change undoubtedly made the right call!

5 thoughts on “Going Down in History”