The NHL All-Stars skills competition this past Saturday took place 80 years to the day that Howie Morenz – arguably the first true NHL superstar – suffered the broken leg that would not just end his career but his life.

Howie Morenz of the Montreal Canadiens was the biggest star in hockey from the mid 1920s until the early 1930s. After an offseason in 1933-34 (and fears that his all-out approach to the game had seen him burn out early), the Canadiens decided to trade him. He spent the 1934-35 and 1935-36 seasons playing in Chicago and New York, doing little to convince anyone that he had much left. But after being sold back to Montreal in the fall of 1936, Morenz seemed rejuvenated. He wasn’t quite putting up the points that he had in his heyday, but the old speed seemed to be back and the Canadiens were once again playing first-place hockey. 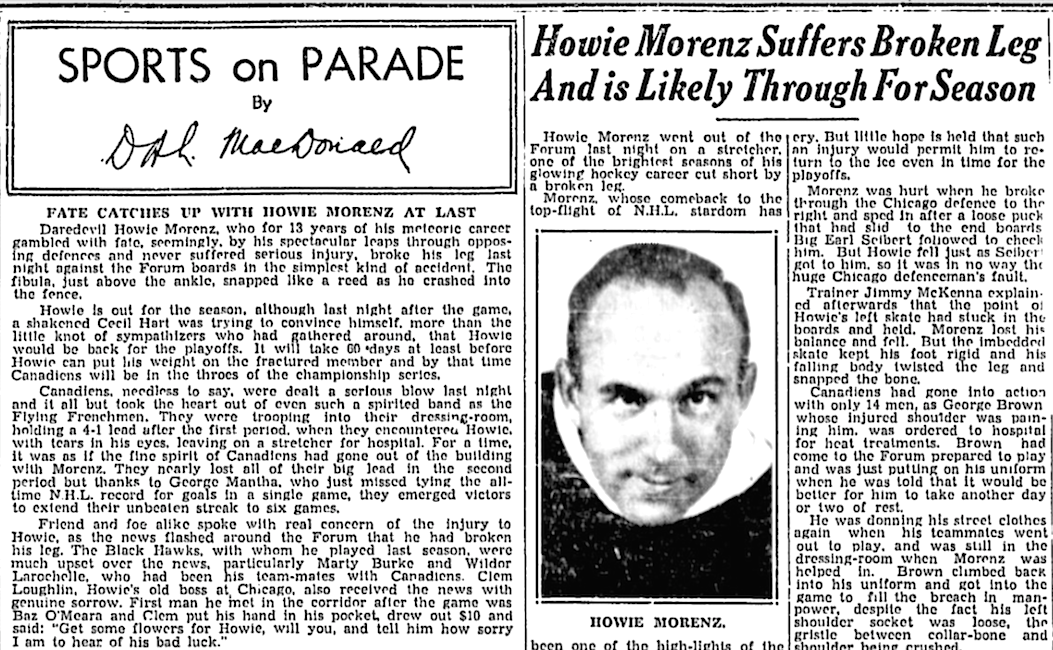 In a game against the Black Hawks on January 28, 1937, Morenz sped into the right corner behind the Chicago net to chase a loose puck. He fell just as defenseman Earl Seibert was catching up to him. Morenz slid into the corner and his left skate caught in the boards. Seibert fell on top of him. Morenz’ leg snapped. It was broken in at least four places. According to some reports, the sound could be heard throughout the Montreal Forum.

There was some brave talk that Morenz might be back in time for the playoffs, but it was widely believed he was done for the season. Charlie Conacher of the Toronto Maple Leafs (who missed most of the 1936-37 season with a wrist injury) was writing a column for the Globe and Mail at the time. Two days after the accident, on January 30, he wrote: “It is too much to hope that [Morenz] will be ready to play again, even by the time the finals arrive.” 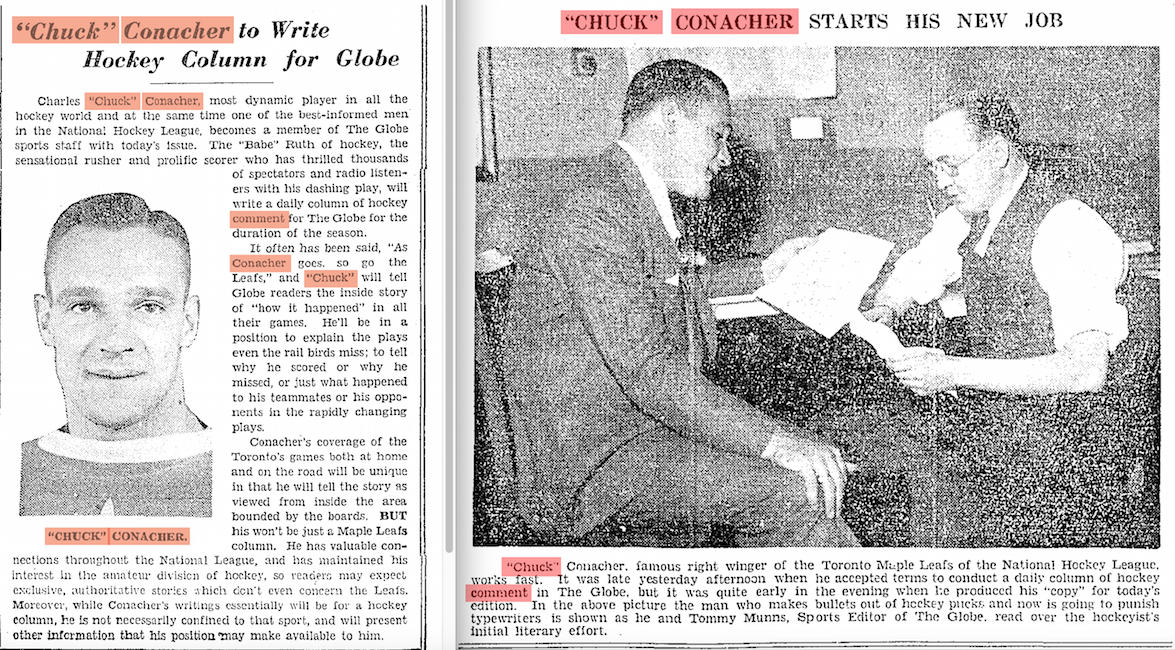 Introduction and photo in the Globe on November 11, 1936, when Charlie Conacher’s
column launched. (The paper would formally become the Globe and Mail on November 23).
Conacher’s column ran until April 4, 1937. Editor Tommy Munns may well have ghosted it.

At age 34 in 1937, Morenz was considered old for an athlete. For that reason any comeback was soon seen as a long shot. “[W]hile I admire Howie’s courage and hand him the palm as the greatest centre player in the league (in my time, at least),” wrote Conacher in his February 15 column, “it is my opinion that he is through. His great heart makes him say that he hopes to play next season, but the courage that has taken him past so many opposing players can’t beat nature.

“The opinion that Morenz is through is based on the fact that athletes in all lines of sport who have been seriously injured at Morenz’ present age, or even younger, have been unable to return to competition and stay there. Examples of this are too numerous to mention.”

For this reason, Conacher urged ownership of the Canadiens and the Montreal Maroons to arrange a benefit game for Morenz right away. “Now, with the fans still talking about [him], is the time for the Montreal clubs and fans to rally to his support and show him what they think of what he has done for hockey in their city. Next fall, if he finds he is through, it will be too late, for they soon forget in sport…. 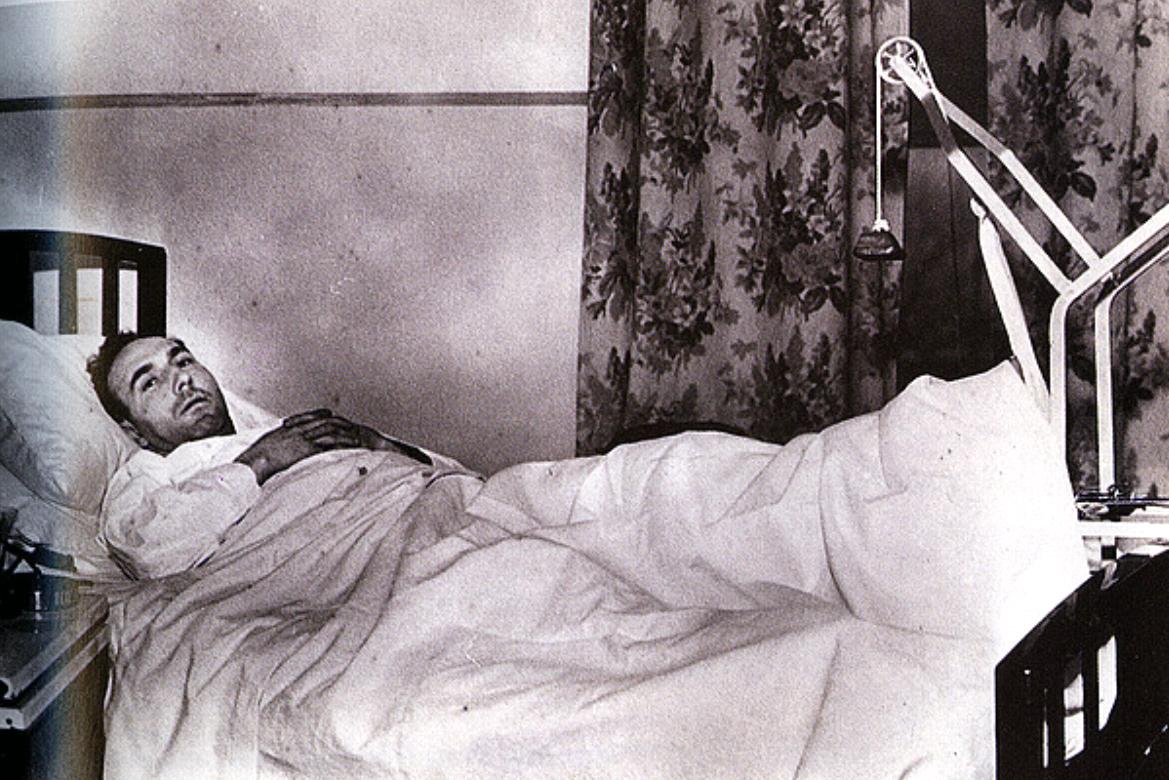 Howie Morenz in hospital. (Wikipedia states this photo is in the Public Domain.)

“Such a tribute is due Morenz, quite apart from the money that would be raised for him. He would appreciate the gesture from the officials and fans of the city that has been his hometown as far as professional hockey is concerned.

“In Montreal they may say they prefer to wait and see if Howie can come back but I repeat it will be too late… Now is the time for a testimonial to one of the greatest hockey players of them all. Howie has done plenty for you, Mr. Gorman and Mr. Hart. WHAT IS YOUR ANSWER TO THIS CHALLENGE?”

Conacher would continue to bring up the idea in his column over the next few days, and by February 23 he could report that the Canadiens had agreed to stage a benefit before the end of the season. But then, on March 8, 1937, Howie Morenz died while still in hospital. 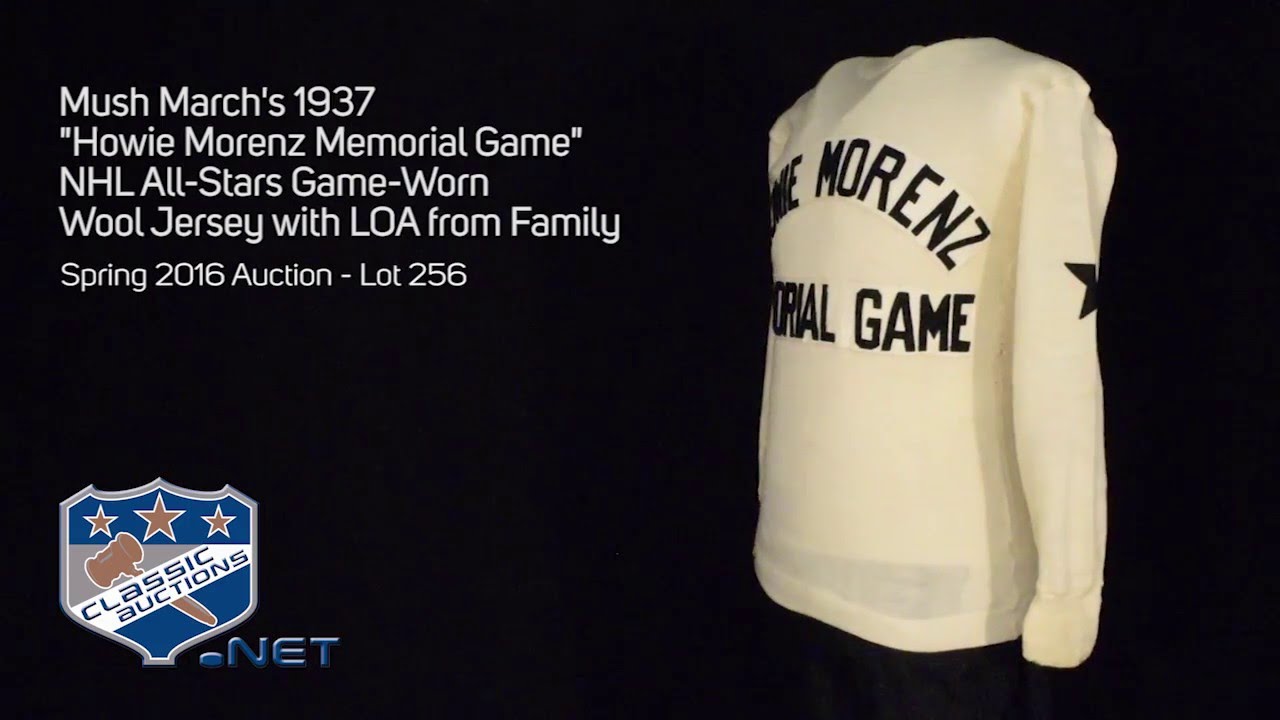 It’s often been written over the years that when he realized he could never play again, Morenz died of a broken heart. There have also been those who contend that he took his own life. Newspapers at the time said a heart attack. In truth, it’s most likely that Morenz died of an embolism brought on by blood clots, which his doctor had apparently detected the night before. “It’s our understanding,” wrote grandson Howard Morenz III back in 2005, “that, even in 1937, they had the means to dissolve blood clots. But the doctor decided the problem could wait until morning. The morning was too late.”

“Readers of this column,” wrote Charlie Conacher on March 10, 1937, “will realize that I feel this loss personally, as will any other former opponents of Howie. It was in this space that I advocated a testimonial game for Morenz. As Tommy Gorman is quoted as saying in a despatch from Montreal, it will become a memorial game now.”

The NHL fully committed to the Howie Morenz Memorial Game at a meeting in New York on March 17, 1937. The game was originally to be played in mid April, after the Stanley Cup Finals, but was later rescheduled to the fall and was played on November 2, 1937. The stories in March claimed that the Morenz Memorial was supposed to be the beginning of an annual All-Star Game to create a future fund for injured players. There had been talk of such a thing since the first NHL benefit game for Ace Bailey in 1934, but an annual All-Star Game (originally created to aid player pensions) would not begin until 1947.

8 thoughts on “The Morenz Memorial”