The Hockey Hall of Fame announced its class of 2017 yesterday. Five players and two builders. I don’t know a lot about University of Alberta legend Clare Drake, but someone who dedicated his life to teaching and coaching seems to me to be the type of person the category of builder was created for. Jeremy Jacobs has certainly done his share for the game, but rich guys who own teams are a little bit harder for me to get behind.

As for the players, it’s a pretty media-friendly group this year. And you can’t really argue with the numbers for guys like Dave Andreychuk, Mark Recchi, and Teemu Selanne – although of those three, only Selanne ever achieved real superstar status. Danielle Goyette is definitely a worthy recipient from women’s hockey. Paul Kariya? Well, who doesn’t like Paul Kariya? His totals of 402 goals and 587 assists for 989 points in 989 games are pretty impressive, and at his best, he was also a superstar. Still, he’s a lot like Eric Lindros, Pavel Bure and Peter Forsberg in that he’s yet another inductee of whom it could be argued that he’s being honoured for the potential of what might have been if not for the injuries …. But I’m not really going to complain.

The Hockey Hall of Fame doesn’t release voting results the way the Baseball Hall of Fame does. (Hockey has a fairly small selection committee of industry insiders, while Baseball relies on a large pool of veteran sportswriters.) The NHL does reveal the details of the voting for its awards, but since I’m not aware of a lot of media outlets that ever bother to release them, I thought people might find it interesting to see the results. So, here they are…

Selected from 105 votes cast by the NHL Broadcasters Association. 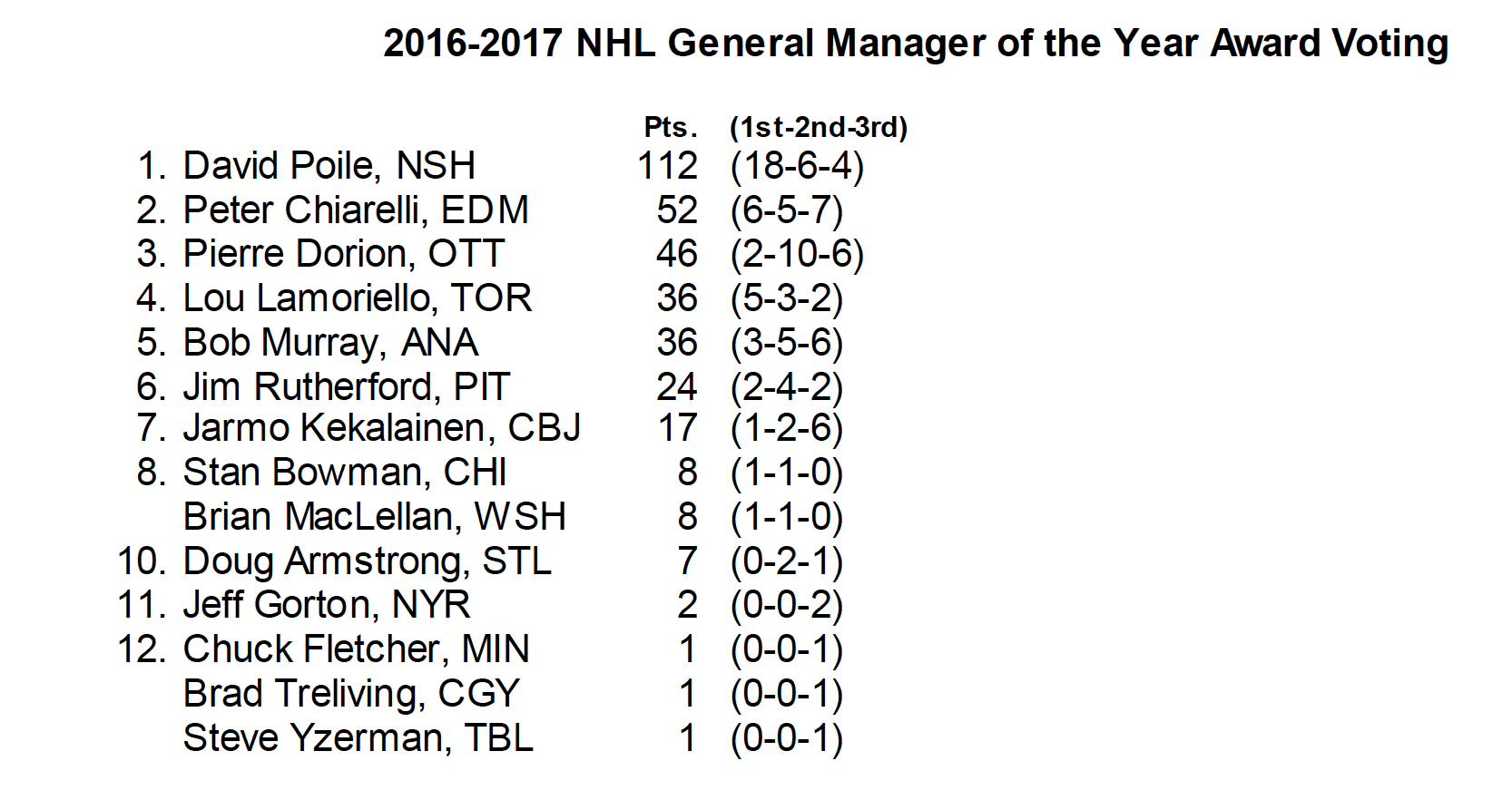 Voting conducted among NHL general managers and a panel of NHL executives, print and broadcast media at the conclusion of the second round of the Stanley Cup playoffs.

I’ve been trying over the last couple of days to come up with a unique historical angle on this year’s Stanley Cup Final. Yes, it’s certainly impressive that the Pittsburgh Penguins have become the first team since 1997 and 1998 to win back-to-back titles, which makes them the first to do so during the current Salary Cap Era. Still, I’m not sure if “the first since…” truly constitutes making history.

I haven’t really come up with anything, but here are some quick items of interest I’ve read or heard since the Finals wrapped up with Pittsburgh’s 2-0 win over Nashville on Sunday night (with a few more historical insights added):

– Not only do the Penguins join the Edmonton Oilers as the only non-“Original Six” NHL team to have won the Cup as many as five times, they’re the first team ever to win their first five Cup titles against five different teams.

– No team in NHL history has played more games in two consecutive playoff years than the 49 the Penguins have played the last two years (24 last year, 25 this year). As an interesting comparison, the first team ever to play 25 games in one year (regular season AND playoffs combined) en route to winning the Stanley Cup was the Toronto Blueshirts of 1913-14. Toronto went 13-7-0 during the regular season in the National Hockey Association, won a two-game playoff with the Montreal Canadiens and then swept a best-of-three Stanley Cup series from the Victoria Aristocrats. When the Ottawa “Silver Seven” held the Stanley Cup for nearly four straight seasons from 1903 to 1906, they barely topped 49 games in total that entire time, playing just 30 regular-season games plus another 23 in Stanley Cup challenge matches. The Ottawa Senators of 1926–27 were the first team in history to play as many as 50 games in one season en route to winning the Stanley Cup, going 30-10-4 during the 44-game regular season and then playing six more games in the two rounds they needed to get through the playoffs.

– Although the Cup has been decided in overtime 17 times in NHL history (18 all-time if you count Dan Bain’s overtime winner for the Winnipeg Victorias in 1901), Patric Hornqvist became just the third player in NHL history to score the Cup-winning goal in the final two minutes of regulation time. The others: Boston’s Bill Carson in 1929 (18:02 of Game 2 at NYR) and Chicago’s Dave Bolland in 2013 (19:01 of Game 6 at BOS). Ernie McLea scored the Stanley-Cup winning goal with about two minutes remaining when the Montreal Victorias beat the Winnipeg Victorias 6-5 to win their one-game, winner-take-all Stanley Cup rematch all the way back in 1896.

– Matt Murray is the first goalie in NHL history to win the Stanley Cup-clinching game in each of his first two seasons in the league. (Rollie Melanson won the Cup his first three years in the NHL with the New York Islanders in 1981, 1982 and 1983, but saw almost no action during the playoffs as the back-up to Billy Smith.)

– Murray is also just the fourth goalie in NHL history to post two consecutive shutouts in the last two games of the Stanley Cup Final. The first three all played for Detroit: Earl Robertson in 1937, Johnny Mowers in 1943, and Terry Sawchuk in 1952. Incidentally, I had a quirky little story including Earl Robertson that I posted during those weeks when I seemed to be having email issues. If you never saw it, please click here.