One of the big stories in the early days of the 2014-15 NHL season is the apparent demise of fighting, and/or enforcers. I’ve never been a big fan of fighting; never been the kind of guy who leaps to his feet when a fight breaks out. I wouldn’t miss it if the NHL imposed tougher penalties for fighting. I certainly don’t miss it in the playoffs, or at the Olympics. As Brendan Shanahan recently said, there’s a difference between tough hockey and fighting. Give me an old-fashioned Brian Glennie hip check any day … and punish the Dan Maloney types who attack him after a clean hit.

So how long has fighting truly been a part of hockey?

Hockey has always been rough. A few years ago, when researching the history of the Stanley Cup, I came across this story from The Quebec Saturday Budget dated March 4, 1899:

“Queen’s hockey team, Kingston, has challenged the Victoria hockey team, of Montreal, for the Stanley Cup. Before leaving they should order seven full suits of armour and as many coffins in order to be prepared for all emergencies.”

The warning makes it pretty clear the sport was tough … and I don’t think any hockey historian will tell you that the Montreal Victorias were noted for their violence.

Even if only some of the reports in early era newspapers of players swinging sticks at opponent’s heads are accurate, the level of violence would stun modern fans. Slashing, high sticking, cross-checking, butt-ending, and spearing was all common place. And it wasn’t “rats” doing the dirty work. In the days of seven-man hockey, when players were expected to be out on the ice the full 60 minutes, many of the biggest stars were also the dirtiest players. Frank McGee is best known today for scoring 14 goals in a single Stanley Cup game in 1905, but he wasn’t above hooking an opponent around the neck!

Still, there weren’t many fights in the early days, and when there were, it was often the police that broke them up. Art Ross and Roy “Minnie” McGiffin (who, despite his small size, may well have been hockey’s first true goon) were famously arrested after fighting in a game in Toronto on February 17, 1915. Unlike Todd Bertuzzi or Marty McSorely in recent years, Ross and McGiffin hadn’t done anything more violent than simply exchanging punches … though McGiffin took a pretty good beating. As the arresting officer explained to a reporter from The Globe:

“That is not fair to the public. Last night, there were three hundred women present in the audience of fifteen hundred. Professional hockey has been fairly clean this winter, but it is time that players should learn that no rowdyism will be tolerated. There can be no use in allowing it to continue. Such exhibitions will kill the sport.”

Seems Inspector Geddes was wrong about that!

So, what changed the game from one of stick-swinging violence to one of actual punches and fighting? This likely isn’t the definitive answer, but with the First World War raging in Europe, an unnamed editorialist writing in the Toronto World a few days later, put the blame squarely on sa Germuhns!

In an amazingly propagandistic rant, the writer says:

“Now that the police court has been called in to settle the etiquet of the hockey rink, it might be well for all who are responsible for the honor of Canadian sport to recognize the introduction of this German element into our national games… We have no desire to see sport reduced to pink tea proportions, but there is all the difference in the world between vigorous, manly sport, according to the rules laid down, and the crooked, German violation of rules in order to win by foul means… A vast mass of our population never get any other ideas of honor and fair play except what they get in sport. If our sport is not clean and fair our people grow up with such ideas of honor as the Germans have shown in events leading up to the present war situation… King George thought it sufficient condemnation of the German methods to say that ‘It isn’t cricket.’ Canada should have as high a standard and be able to say with equal force, ‘It isn’t hockey.’”

What would Don Cherry think? 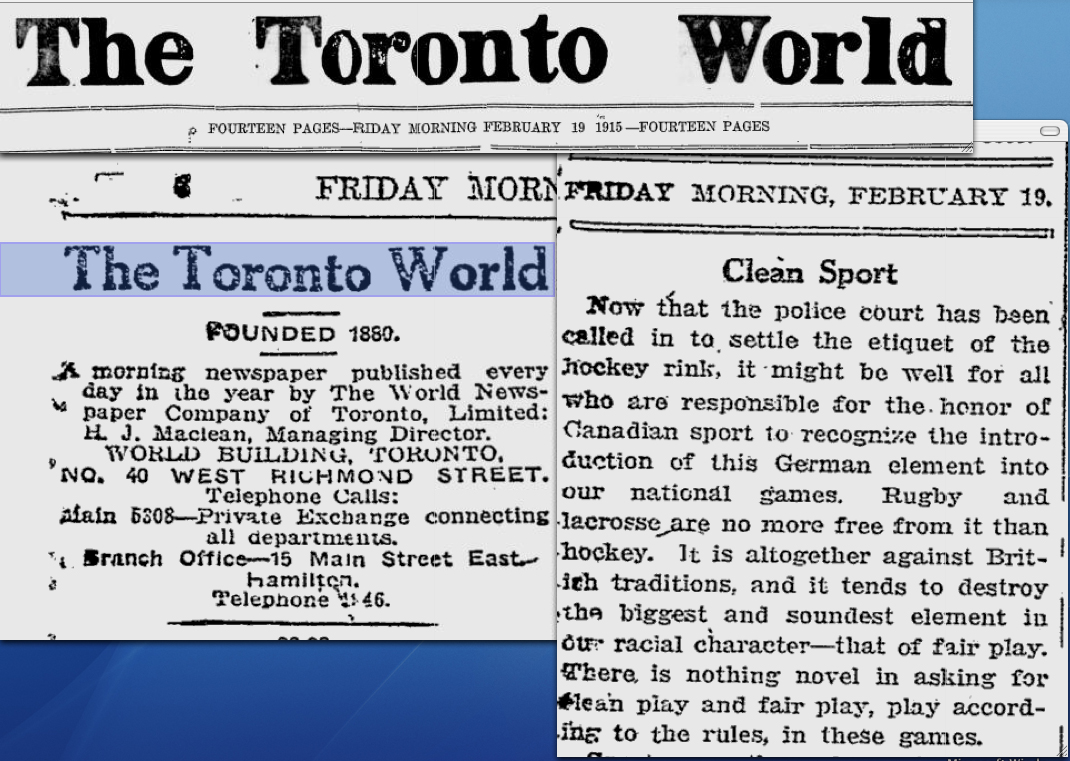 2 thoughts on “Hockey Fight in … Germany?”