During the late 1980s, when I was at my most interested in NCAA basketball, I had a fondness for Gonzaga University. Partly that was because Gonzaga grad John Stockton was starring alongside Karl Malone with the NBA’s Utah Jazz, whom I also liked at the time. Admittedly, though, a big part of it was that I just liked to say, “Gonzaga!”

A couple of years ago, Canadian star Kelly Olynyk (now with the Boston Celtics) led Gonzaga to the top seed in the West Region at the NCAA tournament. Sadly, after a 31-2 regular season, the Zags (their actual nickname is the Bulldogs) went out in the second round. This year, with Canadians Kevin Pangos and Kyle Wiltjer, Gonzaga was 32-2 and were seeded second in the South. The Zags reached the “Elite Eight” for just the second time in school history, but were eliminated this past weekend by top-ranked Duke in the South Region Final and so failed to reach this weekend’s Final Four.

More than 75 years ago, Gonzaga used a Canadian connection to briefly become a West Coast hockey power. Coach and promoter Denny Edge ran Gonzaga’s hockey team. He was born in England, but raised in Regina, where he played junior hockey from 1918 to 1922, helping the Regina Pats reach the finals of the 1922 Memorial Cup. Edge played pro hockey in Los Angeles in 1926-27 and then managed the rink in Portland, Oregon until 1936 before moving to Spokane, Washington, to coach at Gonzaga. 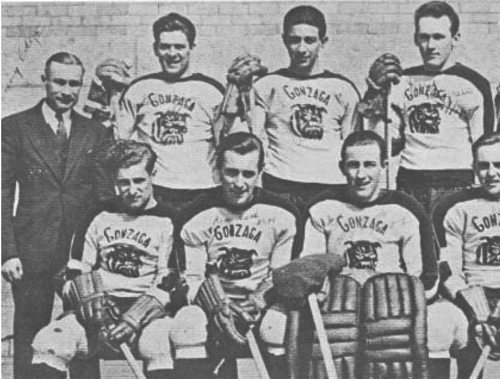 Edge tapped his home province of Saskatchewan for hockey players to take to Gonzaga – particularly the town of North Battleford. Future NHL goalie and executive Emile Francis was a young boy in North Battleford at the time and remembers the exodus of local talent. Jerry Pettigrew had led the North Battleford Beavers to the Allan Cup (Canadian amateur championship) Finals against Sudbury in the spring of 1937 before being recruited to Gonzaga that fall. Several other local boys made the trip with him and Gonzaga won the West Coast Amateur Hockey title in 1937–38. In their final game of the season they defeated the Big Ten champion University of Minnesota 5-1.

Edge added goalie Frank McCool of Calgary to the Gonzaga roster in 1938-39. McCool, later known as “Ulcers,” would famously win the Calder Trophy and the Stanley Cup with the Toronto Maple Leafs as an NHL rookie in 1944–45 while guzzling milk between periods to calm his roiling stomach. In his first of two seasons at Gonzaga, McCool led the team to the Pacific Northwest Amateur championship, a second straight West Coast Amateur title, and the Pacific Coast Collegiate championship.

James “Stocky” Edwards of Battleford, Saskatchewan isn’t a name most hockey fans will know. He was one of Canada’s leading air aces of World War II, but before that, Edwards played hockey at St. Thomas College, a Catholic high school in Battleford. He was small, but determined and very competitive. Barbara and I have visited with Stocky and his wife Toni several times before and after she wrote The Desert Hawk. He and I have talked hockey a bit, and I also had the chance to speak with Emile Francis about him. 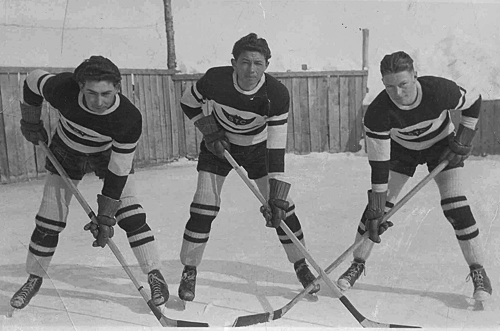 Jim Edwards is on the right with brothers Paul (center) and Edd Ballandine.

It had been decades since Francis faced Stocky (or had even seen him) when Stocky was finishing up at St. Thomas and Francis was a freshman at North Battleford Collegiate. Still, he remembered him as an excellent shooter who would cut hard for the net from the right wing. “He didn’t take the ‘overland route,’” said Francis, who added that the first time he played against Howie Meeker of the Toronto Maple Leafs he thought, “This guy reminds me of Jimmy Edwards.”

Edwards was good enough that Johnny Gottselig of the Chicago Blackhawks arranged for him to have a tryout with the team. He also attracted the interest of Denny Edge, who recruited him for Gonzaga. Excited as he was by the NHL attention, Edwards planned to further his education at the Spokane University … but decided to join the RCAF instead. Edwards went on to a career in the Air Force, while Denny Edge’s powerhouse hockey program at Gonzaga University became a forgotten casualty of the Second World War.

6 thoughts on “Canucks Go For Pucks at Gonzaga”