This Saturday, Floyd Mayweather and Manny Pacquiao meet at the MGM Grand in Las Vegas in the most-anticipated boxing match in decades. The welterweights have long been considered the two best fighters in the world, and though boxing has certainly been in decline, the money for this bout is staggering. As champion, Mayweather will receive a 60-40 share of the purse that could net him as much as $180 million, win or lose. Pacquiao will have to get buy on a mere $120 million or so.

Something as simple as a broken finger from a bad bounce could have derailed the whole fight, but despite all the money on the line, Pacquiao, in the days leading up to his last fight in October, and as recently as early March while training for Mayweather, was playing basketball for the team he owns in his native Philippines.

Beginning around 1924, Boston fighter Jimmy Maloney was a fairly successful heavyweight who fought against future champions Jack Sharkey (also of Boston) and Primo Carnera. In fact, Maloney was the first American boxer to beat Carnera during the Italian fighter’s first trip to the United States in 1930.

Art Ross had been known to step into the ring on occasion during his days as a hockey player, and as coach and GM of the Bruins, he allowed Maloney to hit the ice with his team in December of 1932 in a novel training technique that Pacquiao has emulated somewhat. 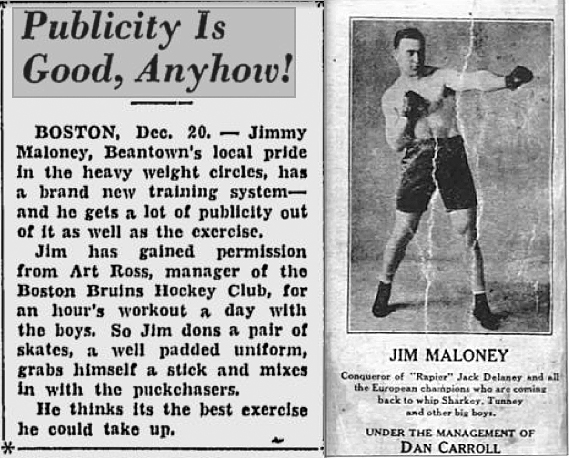 Maloney lost his next fight to Jose Santa on January 19, 1933, and certainly didn’t earn anything close to $120 million. He had a new manager by the end of 1933 – and probably wasn’t playing much more hockey – but lost what appears to be his last bout to Johnny Risko on January 9, 1934. Before the end of the year, Maloney was out of the fight game and working as a policeman in Miami. He later worked as a referee for boxing and wrestling matches. From what I can find on the internet, Maloney had a career record of 51-18-2 with 26 wins (and nine of his losses) by knockout. He died at the age of 68 on August 1, 1971. 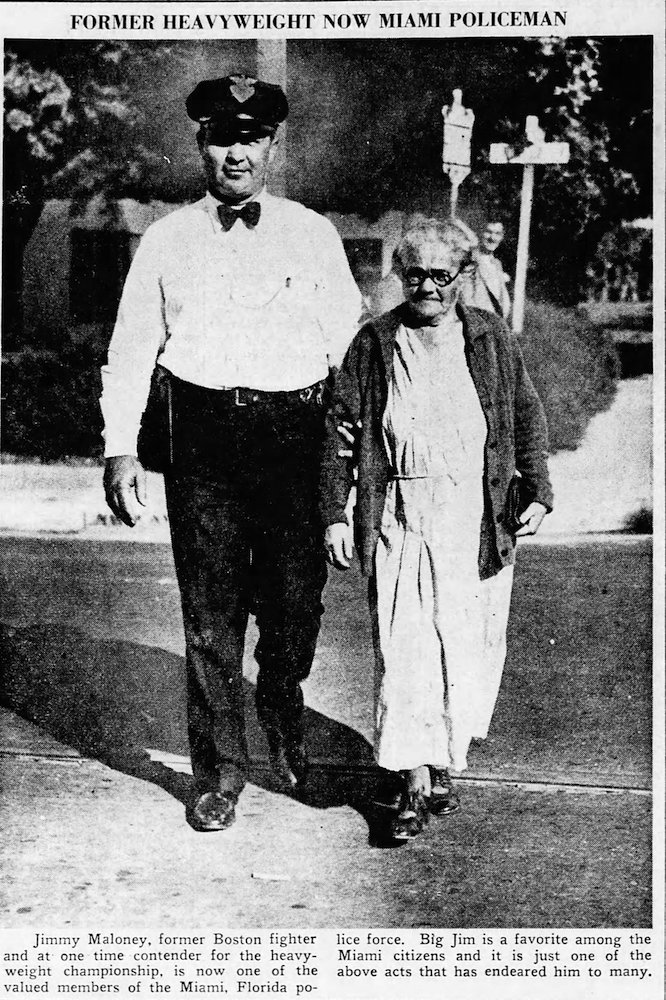 2 thoughts on “Boxing, Basketball and Hockey Too”