Since the picture of hockey legend Lester Patrick that appears below originally ran in the Sunday Oregonian newspaper in Portland on February 14, 1915, consider this story a somewhat strange, slightly belated, Valentine’s gift to my wife, Barbara. 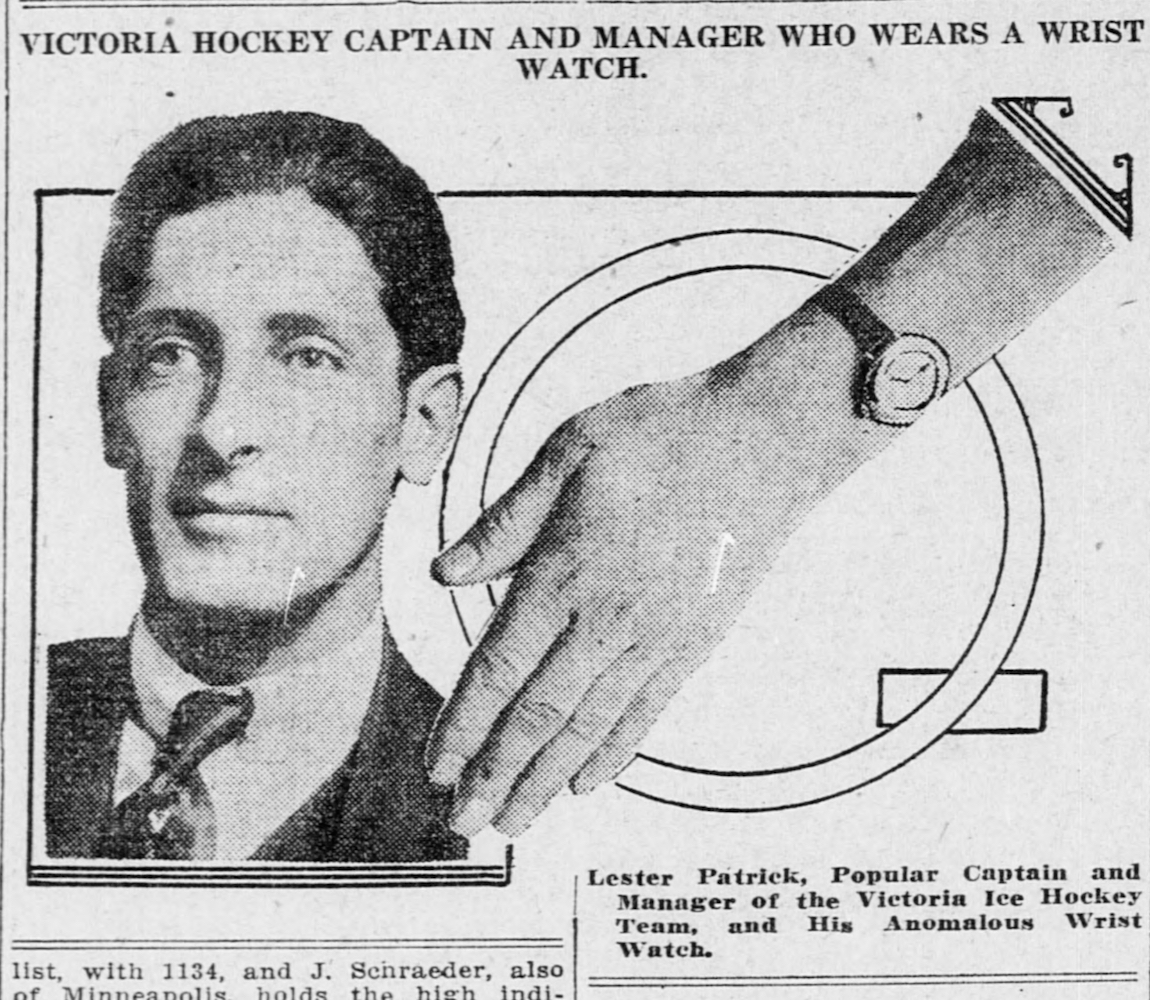 Barbara’s knowledge of hockey was pretty limited at the time. Raised by two parents from Montreal, it basically consisted of, “Canadiens, good. Maple Leafs, bad.” But Barbara loves history, and historic photographs, and soon she could pick out Lester Patrick in a picture from just about any period of his life.

The fact that Lester is posed with a wrist watch in this picture has nothing directly to do with Barbara and me. But it does fit nicely with our own quirky interests in history and the fact that among the strange bits of trivia we know is that to most people in North America in 1915, a wrist watch – often referred to at the time as a wristlet, or bracelet watch – would have been thought of as – well … girly.

Consider the following excerpt from a story by Christopher Klein that appeared last year on the web site of The History Channel:

Fashionable dandies with portable timepieces on their arms were belittled as “wrist-watch boys” while the tried-and-true pocket watch remained the masculine convention. “The fellow who wears a wrist-watch is frequently suspected of having lace on his lingerie, and of braiding his hair at night,” reported the Albuquerque Journal in May 1914. A New Orleans theater in 1916 assured audiences that the main character in one of its plays was not “portrayed by a wrist-watch, screen actor dude, but by a man’s man.”

“Nobody would ever guess,” said the 1915 story accompanying the wrist watch pic in the Oregonian, “but Lester Patrick, ferocious, wild-acting captain and cover point of the Victoria hockey club of the Coast League, wears the daintiest, most cunning little timepiece imaginable, on his powerful left wrist… Patrick stands about six feet one and weighs 180 pounds and he is about as wrist watchy in action as a bull elephant on a rampage.”

But Lester Patrick was in the vanguard as opinions began to change. Wrist watches had been popular with military leaders in Europe since the 1880s, and by the middle of World War I – even though the United States wouldn’t be in the fighting for almost another year – The New York Times on July 9, 1916, featured a story entitled Changed Status of the Wrist Watch. It reads in part:

“Until recently the bracelet watch has been looked upon by Americans as more or less of a joke. Vaudeville artists and moving-picture actors have utilized it as a funmaker, as a ‘silly ass’ fad. Now, however, since preparedness has become the watchword and timepieces have become a necessary part of the equipment of soldiers, the status of the wrist watch is changing.”

Lester Patrick had received his wrist watch from the citizens of Victoria, B.C. as a thank you for leading its hockey team to a second straight PCHA championship in 1913-14. The Oregonian called it, “Vindication for the wrist watch. Yes sir-e-e-e-e!” So much so that these days, “screen actor dudes” clearly aren’t worried about wearing one. 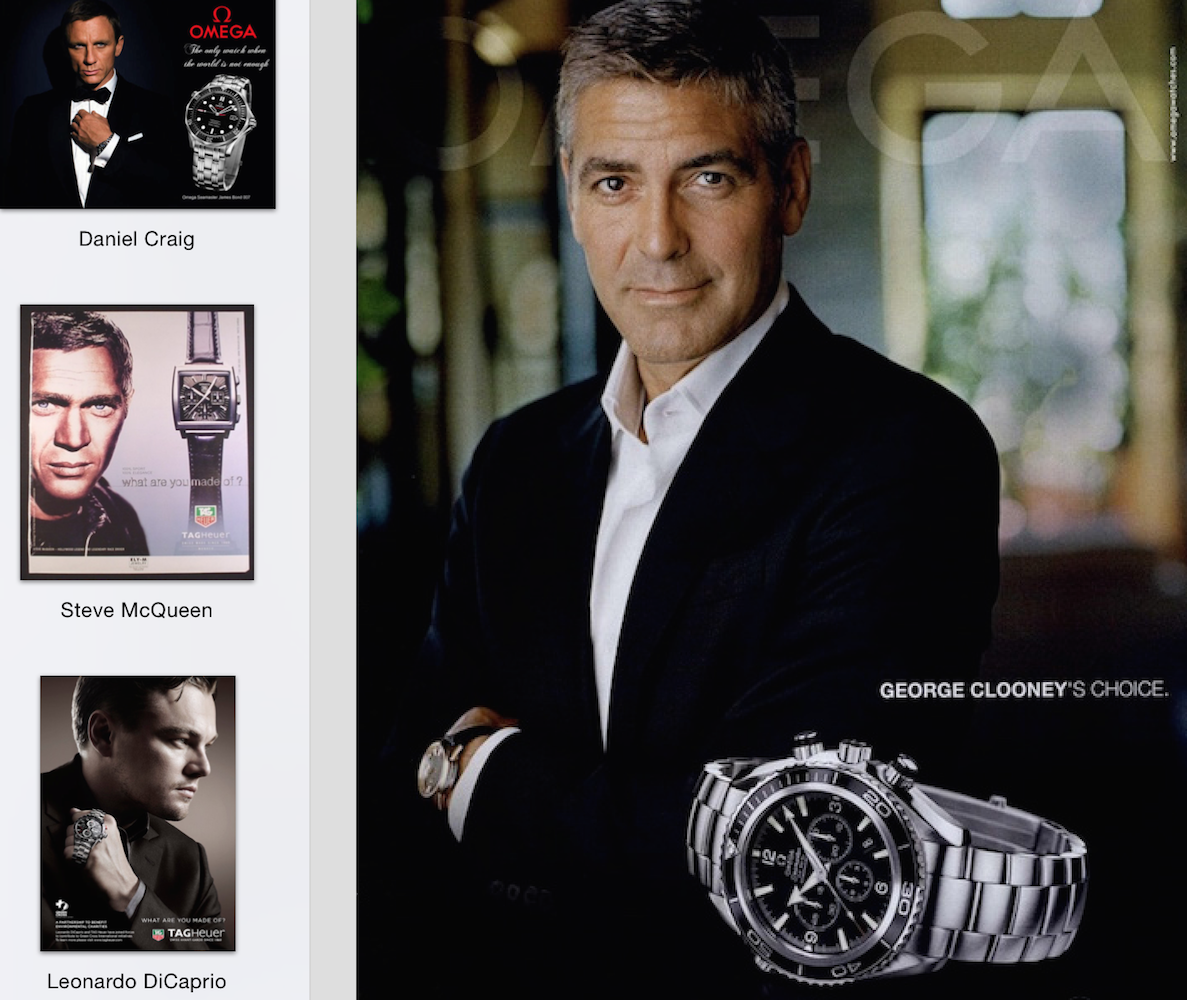 8 thoughts on “As Wrist Watchy as a Bull Elephant”