For a building I never set foot in (the team played its last game there shortly before I turned four) and can’t even remember seeing (it was torn down just a few months later), Maple Leaf Stadium has had a big impact on my life. It’s the place that helped create the love of sports in my mother and father (and my aunts, uncles, and older cousins) that’s been passed down to me and my brothers and on to a new generation.

Certainly my parents saw a lot more baseball games at Maple Leaf Stadium than they ever saw hockey games at Maple Leaf Gardens. I know my father’s childhood heroes were Teeder Kennedy and Max Bentley, but he was a big baseball fan too. And my mother LOVED the baseball Maple Leafs (in particular Ed Stevens during the mid 1950s). She still loves baseball and she’s the reason we still have the season’s tickets to the Blue Jays we’ve had since the moment they went on sale before the first season in 1977. 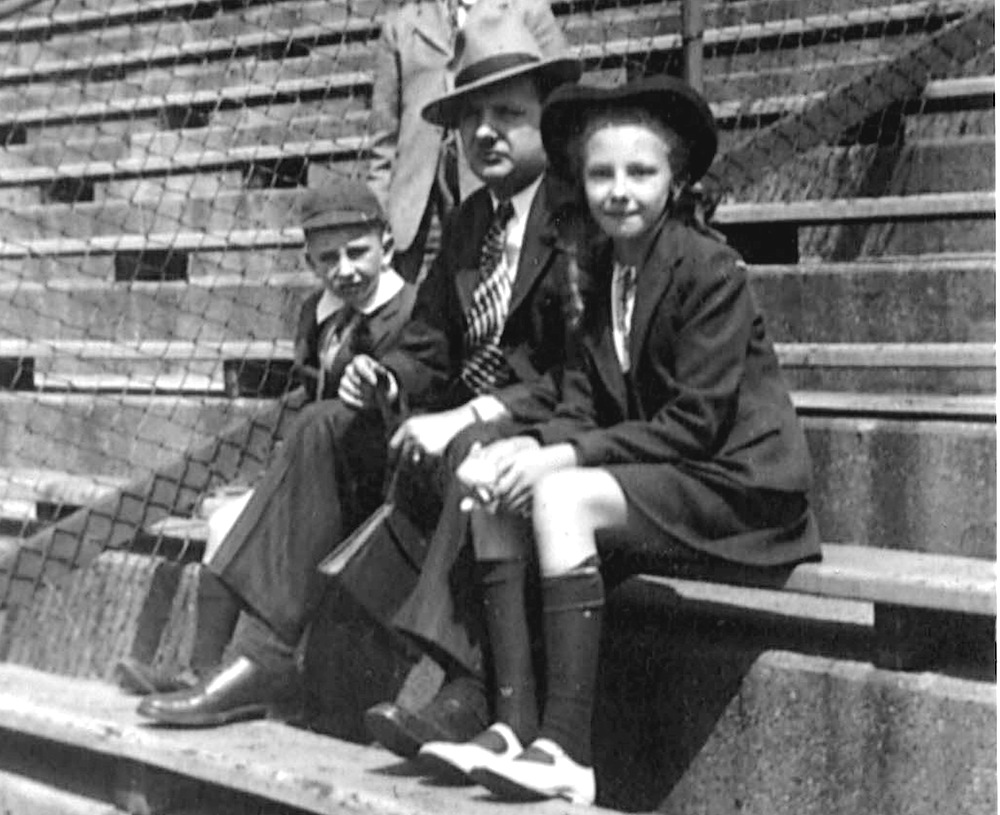 My father, grandfather, and aunt in the mid 1940s. I’ve been told this
is Maple Leaf Stadium (but I think it might be Varsity Stadium).

The Blue Jays are celebrating their 40th season this year, but it was 90 years ago this week that Maple Leaf Stadium opened. Previously (since 1897), the baseball Maple Leafs had played at Hanlan’s Point on the Toronto Islands. Babe Ruth hit his first pro home run there, but it wasn’t the easiest place to get to.

“After years of hope deferred,” wrote Toronto Globe Sports Editor Frederick Wilson on September 5, 1925, “the baseball fans of Toronto are to see their dreams come true, and next season the Leafs will play their games in a magnificent $300,000 stadium on the mainland at the foot of Bathurst Street.” The geographic center of the city at the time, explained Wilson, was “at a point on Harbord Street, about one hundred feet west of Bathurst,” so – forgive me if you don’t know Toronto geography! – the new site was certainly more accessible than the Island. 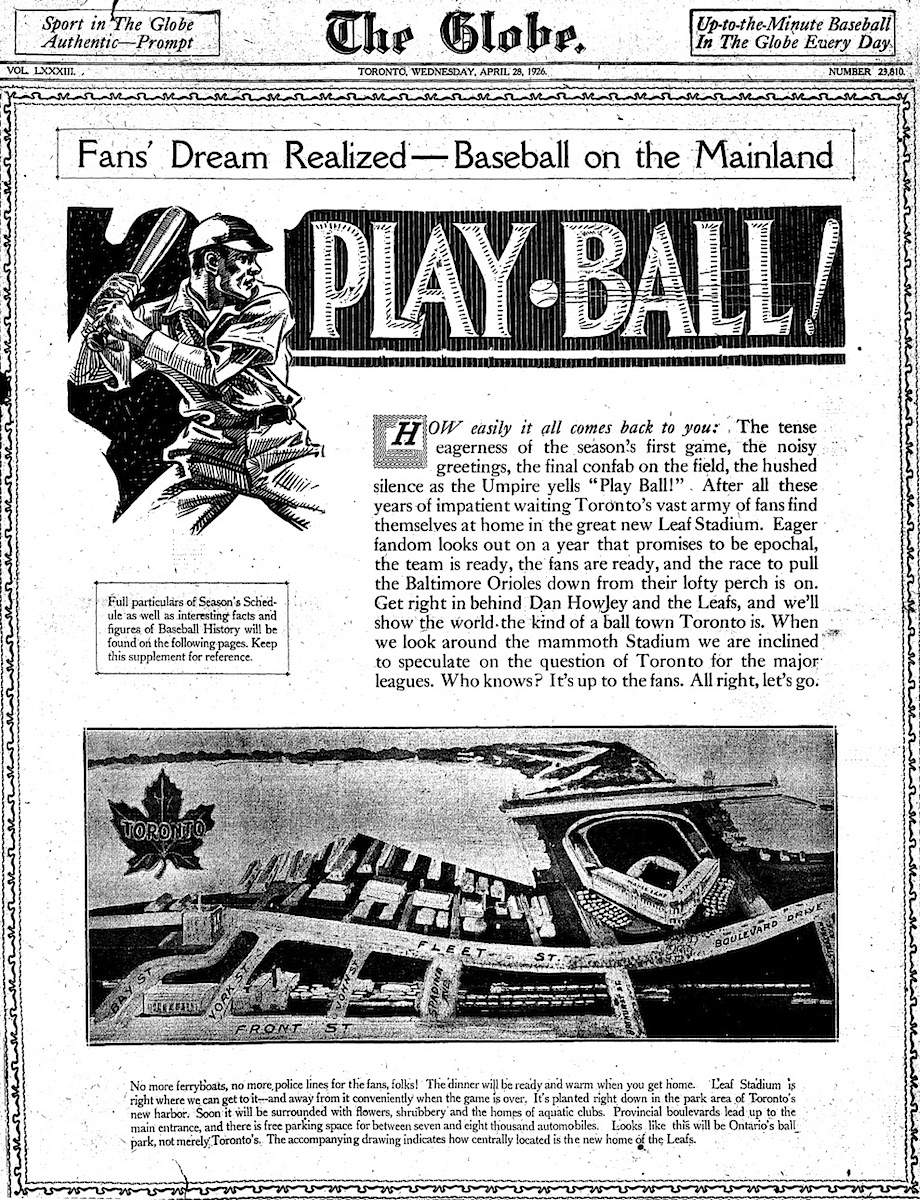 Work on the grounds at Bathurst and Fleet Street (very close to what is now the Tip Top Tailor lofts near the Canadian National Exhibition grounds) began in October of 1925, and construction on the stadium began in earnest on December 2. Though it wouldn’t be completely finished at the time, Opening Day was scheduled for April 28, 1926, after the team had spent the first two weeks of the season on the road.

Sadly, it seems, the weather has not been very cooperative for the opening of Toronto baseball stadiums. The Blue Jays played at Exhibition Stadium on April 7, 1977, despite snow and freezing temperatures, and while the elements weren’t a factor in the first game at SkyDome on June 5, 1989, it was pouring rain during the official opening gala two nights earlier when organizers insisted on opening the roof anyway! 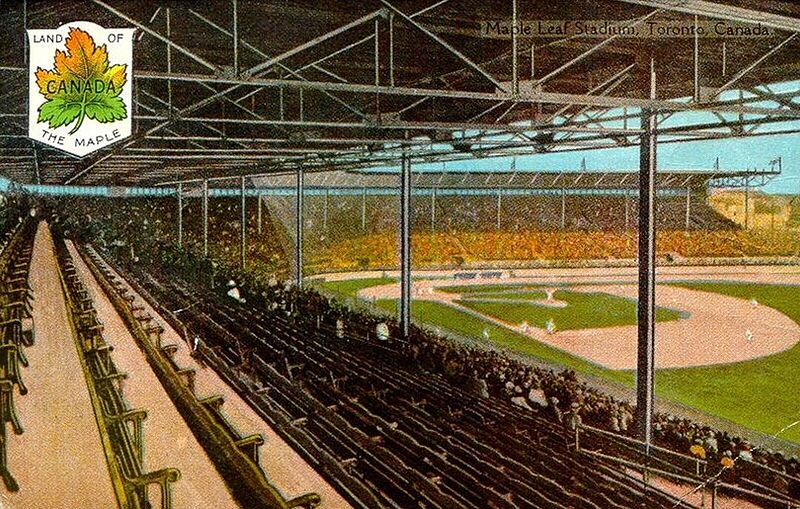 Wikipedia claims this photo is in the public domain!
Credit is to the Bibliotheque et Archives nationals du Quebec, P547,S1,SS1,SSS8,D1.

Many dignitaries were in Toronto for the 1926 opener, including baseball commissioner Judge Kenesaw Mountain Landis, who was given a pregame tour of the facility. “Absolutely nothing forgotten over overlooked,” Frederick Wilson quoted him as saying. “[It’s] as near perfection as it is possible to have a baseball park.” But unlike the SkyDome/Rogers Centre, it didn’t have a roof! Cold temperatures and heavy rains postponed the opener.

Torontonians of a certain age will recall Joe Crysdale on the radio, broadcasting the home games from Maple Leaf Stadium and re-creating them with telegraphed reports and sound effects when the team was on the road. For the opener in 1926, Foster Hewitt was set to call the game on Toronto Star radio station CFCA. It’s unclear whether he was there or not a day later, on April 29, 1926, when they got the game in despite a constant drizzle. Only 12,781 fans were on hand as the Maple Leafs fell behind Reading 5-0 heading into the bottom of the ninth. Those who stuck around where rewarded when Toronto rallied for five runs to tie the score, and then won the game 6-5 on a squeeze play in the bottom of the tenth. (The game, by the way, was complete in 2 hours and 15 minutes!) 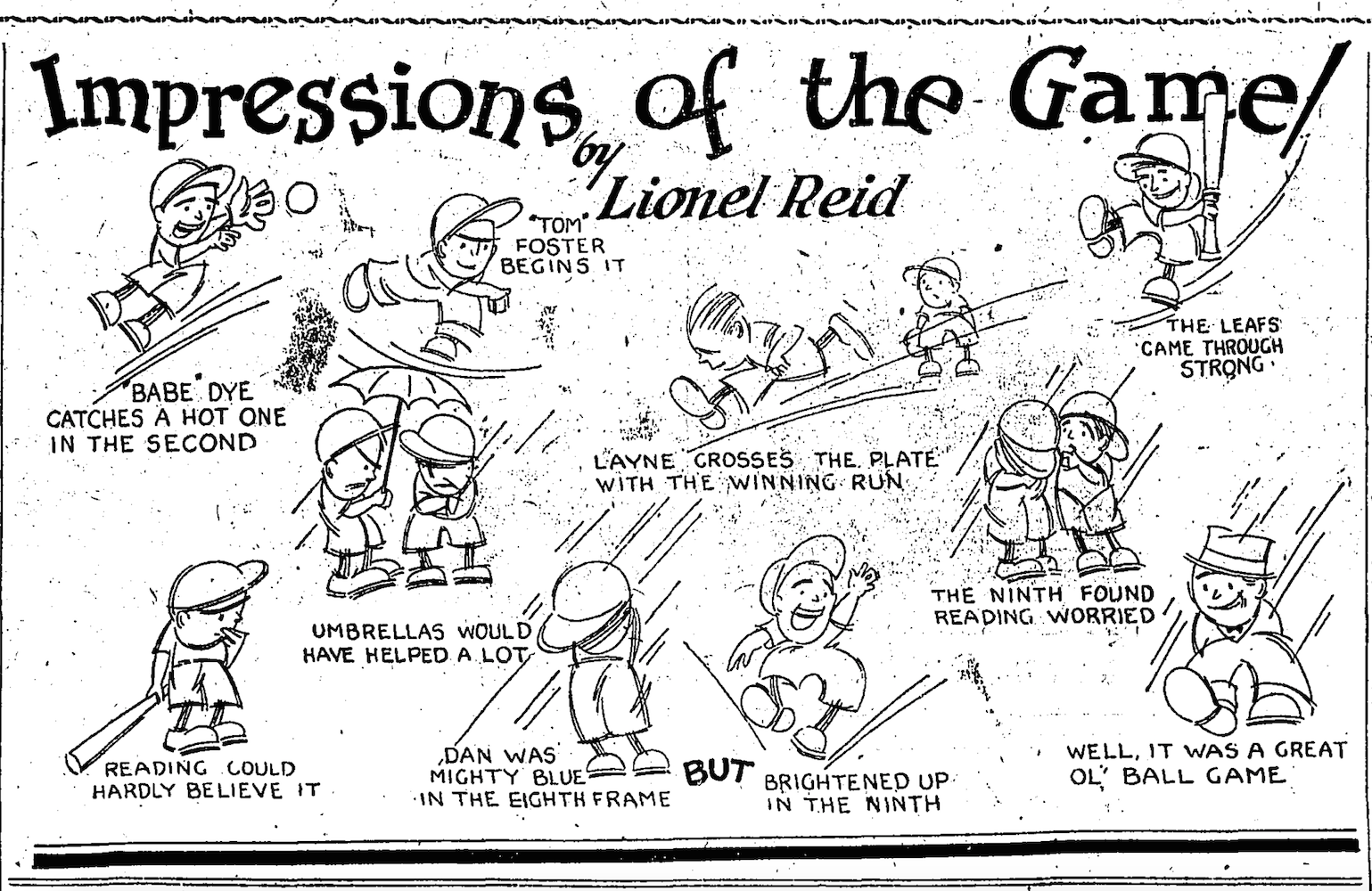 The come-from-behind victory was a good omen. Baltimore had won the International League pennant every year from 1919 to 1925, but in 1926, Toronto had a record of 109-57 to take the league title. They then swept five straight games from Louisville of the American Association to win the best-of-nine Junior World Series. (Oh, and the weather was much nicer for the opener in 1927, and a large crowd was on hand to honor the champions, as this newsreel film shows.)

When it was built in 1925-26, state-of-the-art Maple Leaf Stadium was constructed with an eye towards housing a future Major League team. By the 1960s, Jack Kent Cooke – who then owned the baseball Maple Leafs – felt a brand new park was needed to attract the Majors, but he couldn’t convince City Council to cover the costs. The end was near. Attendance was awful despite championship seasons in 1965 and 1966, and the team was sold and transferred to Louisville after the 1967 season. The Stadium was torn down in the spring of 1968. Only the memories remain – even for those of us who inherited them.