Last week, in my story about the first nationwide hockey broadcasts, I mentioned there would be more this week about the 1931 Stanley Cup Final. The Canadiens won the Cup that year in a tight series with the Chicago Black Hawks. It was Montreal’s second championship in a row.

The Canadiens were coming off a tough first-round matchup with the Boston Bruins. That best-of-five series went the distance with three of the games going into overtime. Montreal opened the Stanley Cup Final in Chicago on April 3, 1931, winning the first game 2-1 but dropping a double-overtime decision by the same score two nights later. This best-of-five set then shifted to Montreal for the remaining games, and Chicago took game three 3-2 in triple overtime. Montreal stayed alive with a 4-2 win in game four, setting the stage for the finale on April 14.

In a short feature covering several topics in the March 31, 1962, issues of Canada’s Weekend Magazine, Canadiens legend Aurele Joliat reminisced about the 1931 Stanley Cup Final with sportswriter Andy O’Brien. Joliat’s longtime linemate and great friend Howie Morenz had been the leading scoring in the NHL that season with 51 points (28 goals, 23 assists) while playing in 39 of the season’s 44 games. Through nine playoff games, he’d picked up four assists, but had yet to score a single goal. However, with the Canadiens clinging to a 1-0 lead late in game five, “It was Morenz who scored the goal that broke it up.” 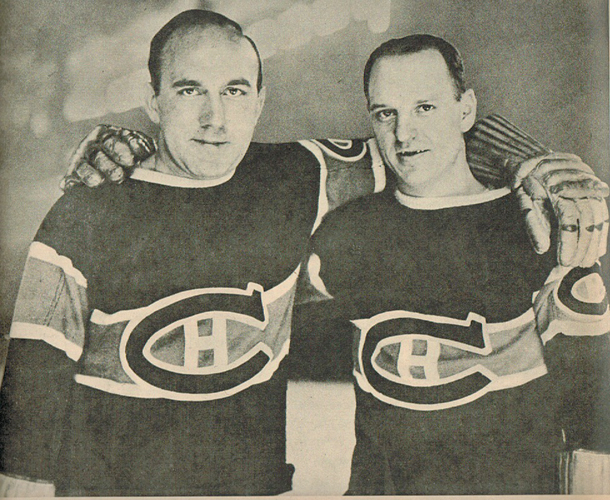 Aurele Joliat (right) kept this picture of him and Howie Morenz in the den of his
Ottawa home. There is no photo credit in the Weekend Magazine story.

“Morenz had rushed away from us with the puck down center ice and was checked at the defence,” Joliat recalled. “Some Chicago forward picked it up on the gallop and I checked him at center. I had only taken two strides when I heard ‘Joliat!’ screamed at me from the right wing. It was Morenz who had raced back on my left wing, whirled around behind me and was now under full steam down the right. I gave him a pass. He took it at full speed and went clean through the Hawk defence to beat goalie Charlie Gardner.”

“Howie Morenz had been held scoreless for nine consecutive playoff games. It was unheard of in his career as a professional. Suddenly, he grabbed a puck at center ice and whirled his way around the left defence, hesitating until he was sure of the shot and hammered it home true.

“It was some minutes before play could be resumed as the fans showered the ice with programs, newspapers and even hats.

“Only four minutes were left and the Canadien supporters’ song of victory, ‘Les Canadiens Sont La,’ was being roared from the rush end.”

“Modern hockey is so fast I can hardly follow it at times,” said Joliat, “but nobody I’ve seen since Howie could combine so much skill with such tremendous speed.”

4 thoughts on “The Mighty Atom and The Stratford Streak”