Barbara and I recently watched the documentary Fastball. Loved it! As a review this past spring in the Los Angeles Times noted, “You don’t have to be a baseball fanatic or for that matter a historian or a physicist to appreciate [this] fittingly zippy tribute to the art of the pitch.” 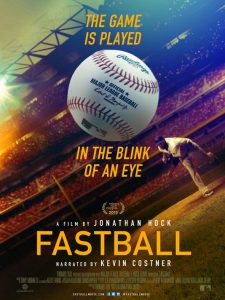 Narrated by Kevin Costner, filmmaker Jonathan Hock (who directed the ESPN 30 for 30 episode about The Miracle on Ice, among his many credits) uses an impressive cast of baseball Hall of Famers to discuss the fastest pitchers of all time. The film also explains the science of how someone can throw the ball at the very upper limits of human mechanics, and how someone else can still manage to hit a pitch whose speed is at the very edge of how quickly a human being can physically see and react. Fascinating!

Plenty of today’s fastest pitchers are featured, and there’s also the sad story of 1960s minor league phenom Steve Dalkowski, who could never master his control. But the movie goes all the way back to Walter Johnson, who pitched 20 years in the Majors from 1907 to 1927 with the Washington Senators.

Virtually everyone of his era agreed that Walter Johnson was the fastest pitcher they had ever seen. As early as 1912, his speed was measures scientifically by the U.S. Army … who tracked him at 122 feet per second. That was considered astonishing at the time, but it works out to only 83.2 miles per hour – which struck me as pretty disappointing for such a legendary fastballer. But more on that in a bit.

When Bob Feller burst on the scene 80 years ago this summer as a 17-year-old phenom, he quickly became the new fastball king. Could he throw harder than Walter Johnson? Perhaps you’ve seen the old film clips of Feller firing his fastball alongside a speeding motorcycle doing 86 miles per hour, but Feller was also given a more scientific rating by the U.S. Military. In 1946, his speed was determined to be 98.6 miles per hour. Now that’s more like it! 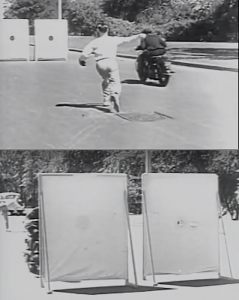 Feller had begun his career at about the same time that Jesse Owens won the 100 meters at the 1936 Berlin Olympics in a time of 10.3 seconds. The current world record of 9.58 seconds was set by Usain Bolt in 2009. The film points out that if fastballs had improved at a similar rate, there would be dozens of guys throwing 120 miles per hour these days. But, of course, there aren’t.

In 1974, Nolan Ryan became the first pitcher to be clocked while he was pitching in an actual game. Radar tracked him at 100.8 miles per hour in 1974 — making him the fastest pitcher ever. Aroldis Chapman currently has that distinction, hitting 105.1 mph in 2010 and again just recently on July 18. But here’s where the measurements get interesting.

Back in 1912, Walter Johnson’s 83.2 pitch was clocked about 7.5 feet beyond the 60-foot-6-inch distance from the mound to home plate. Feller’s pitch was timed just in front of home plate, and Ryan’s at about 10 feet in front. Today’s modern radar guns record the speed of a pitch at about 10 feet from the pitcher’s hand … some 40 to 58 feet prior to where Johnson, Feller and Ryan were measured. It might not sound like a lot, but any extra distance allows gravity to slow down the speed of the ball as it moves through the air.

So take that, modern flamethrowers!