This past weekend, various “this day in history” sources noted that December 10, 1924, marked the first “All-Montreal” game in NHL history. The Montreal Canadiens defeated the NHL’s new Montreal expansion team (who, as I mentioned two weeks ago, had no nickname at this point) 5-0 that day at the Mount Royal Arena. But, as my Society for International Hockey Research colleagues Todd Denault and Lloyd Davis noted on Facebook, this was actually the second “All-Montreal” game in NHL history. The first came on December 22, 1917.

Banner atop the sports page in The Toronto World, December 22, 1917.

On that date 99 years ago, on just the second night of action in NHL history, the Canadiens crushed the Montreal Wanderers 11-2. The Canadiens featured six future Hall of Famers in their nine-man lineup that night: Georges Vezina, Joe Hall, Joe Malone, Newsy Lalonde, Didier Pitre and Jack Laviolette. The Wanderers had two, both playing in their final season: Art Ross and Harry Hyland.

Accounts from the Montreal Gazette and the Toronto World, December 24, 1917.

Like its two star players, the Wanderers team was nearing the end of its time too. Art Ross (who was both player and manager) and owner Sam Lichtenhein had not been quiet about the fact that their team was undermanned heading into the inaugural NHL season. After winning just one of their first four games, the Wanderers were only too happy to bow out after fire destroyed the Montreal Arena on January 2, 1918.

Fiery times were nothing new to this franchise, which was born of trouble and died of trouble. They were often in the centre of any hockey storm.

The Wanderers were officially formed on December 1, 1903, when several key players from the Montreal Hockey Club broke ranks with the Montreal Amateur Athletic Association over the running of the team. These players enticed a few members of the Montreal Victorias to join them, and not only set up their own new team, but also formed a rival league to play in, breaking away from the Canadian Amateur Hockey League (the NHL of its day) to establish the Federal Amateur Hockey League. 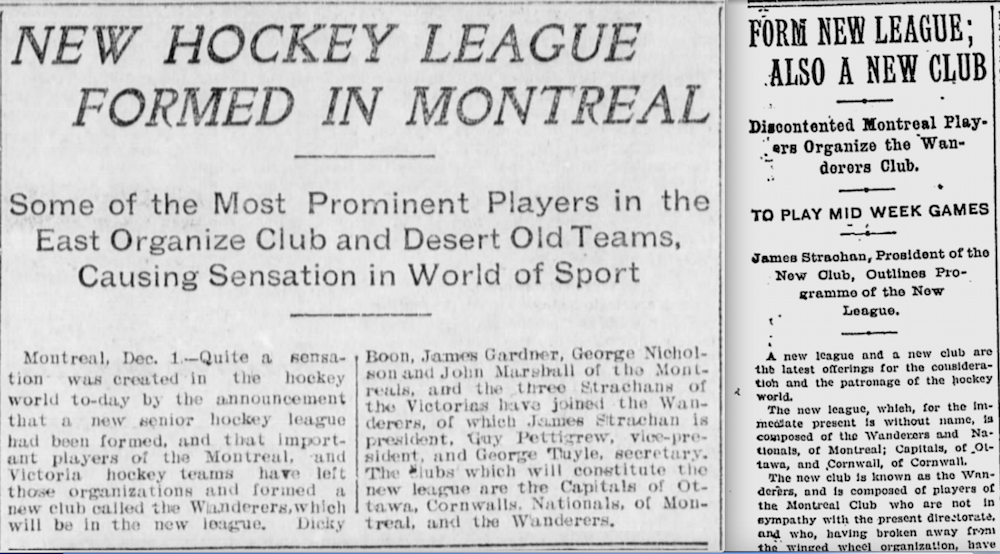 Accounts of the formation of the FAHL and the Wanderers in the
Winnipeg Tribune on December 1, 1903 and the Montreal Gazette on December 2.

In reading about the early history of the Wanderers, you’re likely to come across stories about how they chose their name because they intended to wanderer across Canada, playing challenges for the Stanley Cup. I have my doubts about that!

For one thing – and all their players would have known this! – once the Wanderers became Stanley Cup champions (which they soon would), they would be entitled to host those challenges at home. For another, there was plenty of newspaper coverage of their story all across the country and none of the players were even willing to discuss what had led to their break with the Montreal AAA. Even if they felt their new team was championship material, they don’t seem like the types to have bragged about it so openly. Also, “Wanderers” was already a popular team name in English soccer. It’s thought to have started with teams that had no clear home base and played mainly as travelling clubs. The hockey Wanderers always intended to call Montreal home, but perhaps the name appealed to the players for the somewhat renegade status it would give to their breakaway club.

It certainly seems that no matter who owned the Wanderers, or who played for them, the team was always a maverick. In their not quite 15 seasons of existence, the Wanderers were involved in the formation of at least four new hockey leagues, and as many as six depending on how you choose to count a couple of name changes. After winning the Stanley Cup in 1905-06, they became the first team in Canada to openly pay for players in a sport that was supposed to be strictly amateur. Their part in the formation of the National Hockey Association (forerunner of the NHL) is explained in great detail in my biography Art Ross: The Hockey Legend who Built the Bruins and in my novel Hockey Night in the Dominion of Canada so I won’t go into it here. (If you haven’t read them, why not?!?) 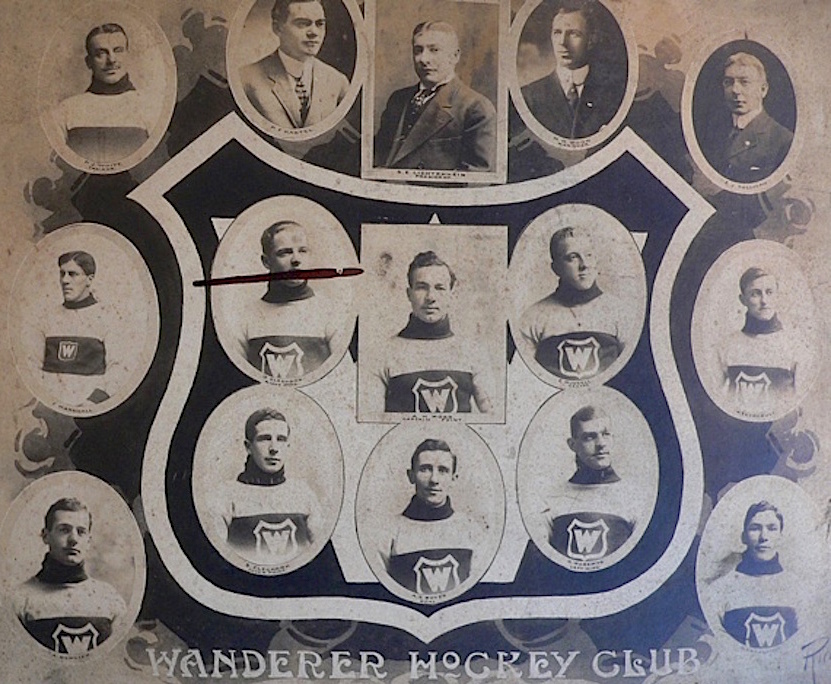 The Montreal Wanderers of 1911-12 from Art Ross: The Hockey Legend
Who Built the Bruin (photograph courtesy of the Ross family).

After Stanley Cup championships in 1906, 1907, 1908 and 1910, the Wanderers began to fall on hard times during World War I, as did several other professional hockey teams. The team was losing money, and clearly, re-forming the NHA as the NHL was not going to help the Wanderers any. The fire that destroyed the Montreal Arena came at a pretty convenient time for them.

Was it too convenient?

In Volume One of The Trail of the Stanley Cup, Charles Coleman notes: “The fire started from an unknown source in the Wanderer dressing room.” Coleman’s book is compiled mainly from items he found in newspapers, so I have to think someone in Montreal wrote that at the time.

I honestly can’t recall whether or not Coleman’s book is the first place I read that about the fire, but it always sounded suspicious to me. Was it some sort of anti-Semitic shot at Sam Lichtenhein hinting that he’d had  the Arena burned down on purpose? A twist on the racist phrase “Jewish Lightning,” in which arson is committed to collect the insurance money? 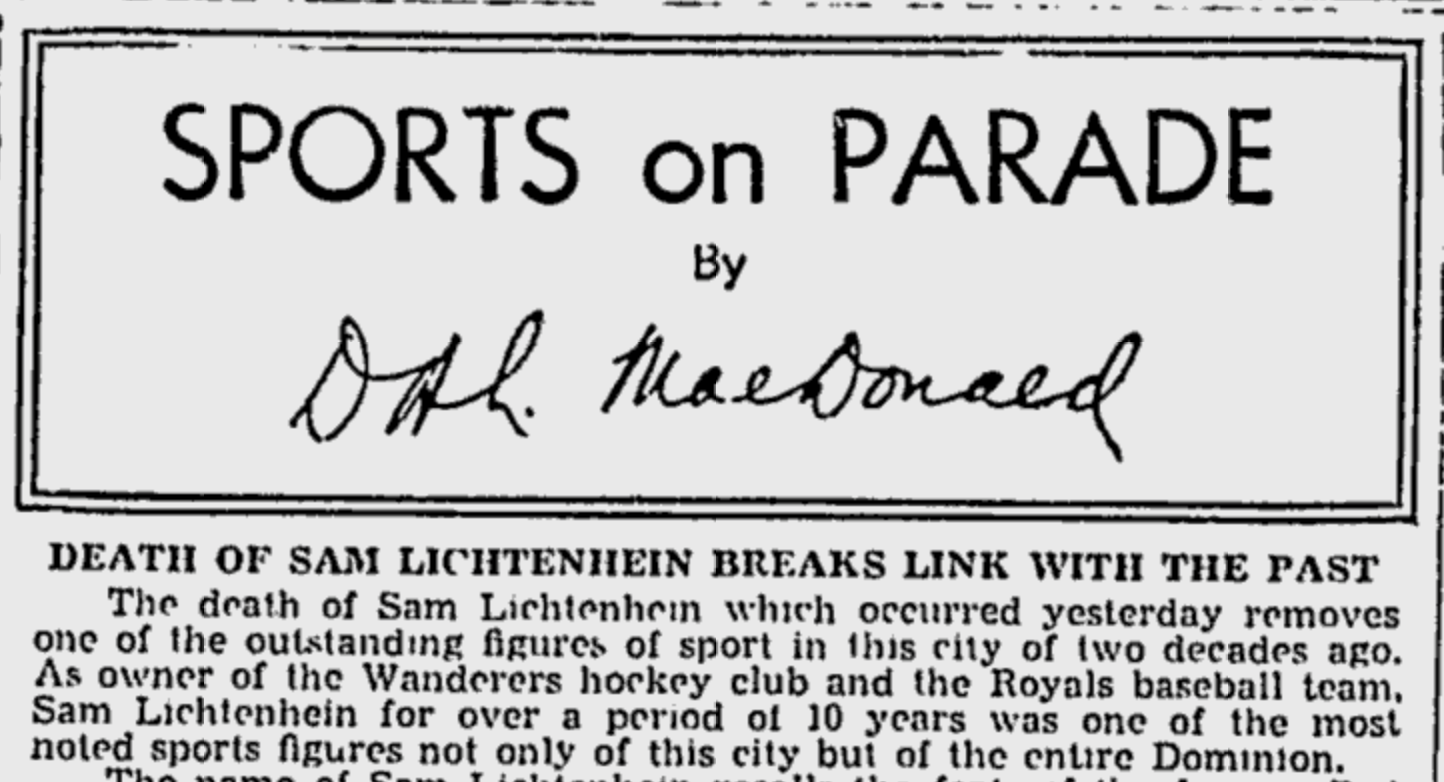 The truth is, fires destroyed an awful lot of sports venues back in the day, and Lichtenhein had carried on with the Montreal Royals baseball team despite fires burning down the grandstand in ballparks they played at in 1914 and 1916. Fires, it seems, followed Lichtenhein around. According to an obituary by D.A.L MacDonald in the sports section of the Montreal Gazette shown above, Chicago’s Great Fire of 1871 had destroyed his father’s business and was the reason the family had moved to Montreal in the first place. And yet something about that sentence still bothers me…

14 thoughts on “The Montreal Wanderers”