We’re coming up on the anniversary (although the 81st is a little inelegant) of the longest game in NHL history. At 8:30 pm on the evening of March 24, 1936, the Montreal Maroons and the Detroit Red Wings faced off at the Montreal Forum. There wouldn’t be a winner (there wouldn’t even be a goal!) until almost 2:30 am the following morning. Nearly six full hours of hockey were played that night; 176:30 by the game clock, with 116:30 of that coming during six overtime periods. The series was a best-three-of-five, but the Maroons and Red Wings played nearly three full games on that evening alone!

In Montreal, the defending Stanley Cup champion Maroons were favoured to defeat the Red Wings and go on to win the Stanley Cup again. Not surprisingly, Detroit coach and GM Jack Adams felt otherwise. “We were the best team over the regular season and proved it by getting more points than any other club in either [division],” said Adams. “The playoffs will merely confirm this fact. We have the best team Detroit ever had and this year we should be good enough to win the Cup.” It would turn out that Adams was right, but in truth, the Maroons and Detroit were very evenly matched. The teams had nearly identical records (Detroit was 24-16-8; Maroons 22-16-10) and fairly comparable scoring statistics. Still, nobody could have predicted what happened in game one. Detroit goalie Normie Smith turned aside all 90 shots he faced. His Red Wings teammates managed only 68 shots on the Maroons’ Lorne Chabot (some sources say 67), but Mud Bruneteau fired the one that mattered. As Elmer Ferguson wrote in the Montreal Herald the next day:

At twenty-five minutes past two this morning, a bushy-haired blonde veteran of hockey, Hector Kilrea, a sturdy, scarlet-clad form wearing the white emblem of Detroit Red Wings, went pounding tirelessly down the battle-scarred, deep-cut Forum ice, trying to pilot a puck that was bobbling crazily over the rough trail, almost out of control.

It looked like another of the endless unfinished plays – when suddenly, in shot the slim form of a player, who through this long, weary tide of battle that ebbed and flowed had been almost unnoticed. He swung his stick at the bobbling puck, the little black disc straightened away, shot over the foot of Lorne Chabot, bit deeply into the twine of the Montreal Maroon cage. And so Modere Bruneteau, clerk in a Winnipeg grain office, leaped to fame as the player who ended the longest game on professional hockey record. Story segment and advertisement from the Montreal Gazette, March 25, 1936.

But as of a few days ago, the game between the Maroons and Red Wings has lost its distinction as the longest in professional hockey history. Norwegian pro teams Storhamar Dragons and Sparta Warriors faced off in Hamar, Norway, at 6 pm on March 12 and didn’t have a winner until 2:32 am on Monday the 13th. After eight-and-a-half hours of hockey – 217:42 on the game clock – Joakim Jensen scored to give the Dragons a 2-1 victory in eight overtime periods. The win gave Storhamar a 3-2 lead in the series, but Sparta bounced back to take the series in seven. 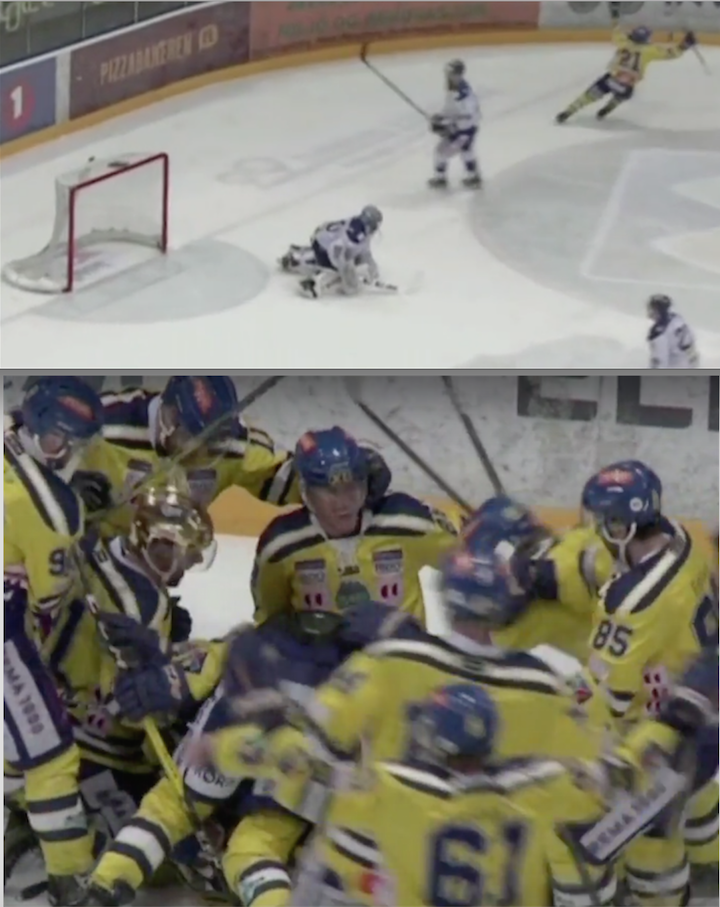 Screen shots of the winning goal and celebration from Storhamar’s 2-1 overtime victory.

Still, as marathon hockey games go, the Maroons and Red Wings and Storhamar and Sparta have nothing on the gang of kids I grew up with on Argonne Crescent. 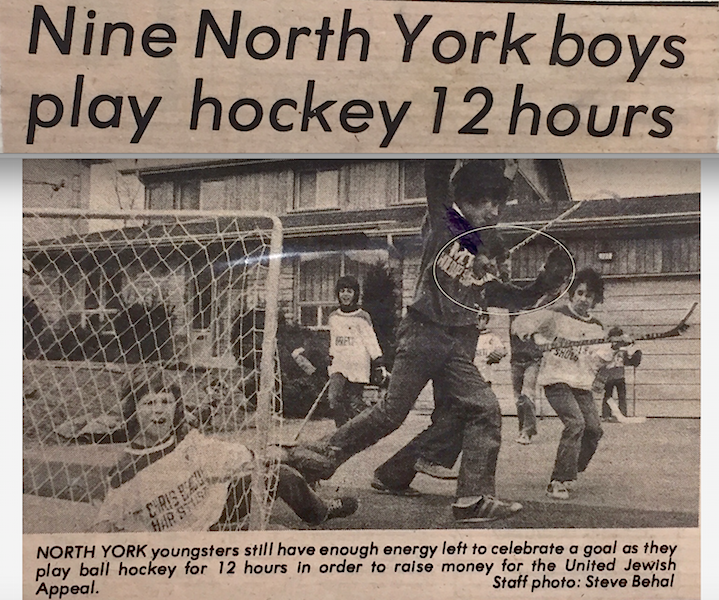 Despite what the caption on the photo says – we got mentioned on the radio too – our goal was not to raise money for charity (although a few relatives did donate to the United Jewish Appeal in honour of our game). We wanted to get into the Guinness Book of Records!

The story that accompanies the photo says that we’d been told the record for playing road hockey was 8 hours. I do remember that we thought it was … but I have no idea who told us, or why we believed it! As I recall, a few weeks later, there was a story about a group of college kids that played ball hockey in a gym for about 100 hours. But, hey, they had squads of players coming and going throughout those four days. We were just nine kids aged 7 to 11 who all had to go to school the next day.

We made it through 12 straight hours. Kept score and everything. The white team, including my brothers David and Jonathan, our cousin Bobby Freedman, Benji Rusonik and Jeffrey Kirsh, beat the Blue team of me, Alan Rusonik, Joel Kirsh and Howard Hamat 250-228.

As my brother Jonathan once said, “at least we didn’t fall asleep like Bobby and Cindy Brady trying to break the teeter-totter record … and if you look in the Guinness Book of Records you’ll find us there – under dumbest kids who ever thought they’d break a record.”

8 thoughts on “Marathon Men … and Kids Too”