On May 2, 1967, the Toronto Maple Leafs won the Stanley Cup. It was the 13th time a Toronto team had won the Cup during the first 50 seasons in NHL history. No one needs reminding that they haven’t won it since.

There have already been many commemorative stories about the 1967 Leafs, and I’m sure there will be plenty more today. I was looking to find something a little bit offbeat; a story of the 1967 Leafs that hadn’t been told before. Well, this one at least is new on me.

In the Thumbnail Tales notes at the bottom of his column on the day of the game, Toronto Star sports editor Milt Dunnell wrote about Leafs captain George Armstrong lingering in front of his locker after practice “long after most other players had showered and departed.” Armstrong, who would score the clinching goal into an empty net in the team’s 3–1 victory over Montreal that night to win the Stanley Cup in six games, explained that “this could be my last hockey practice. I hate to leave it.” (Armstrong would indeed retire briefly a few weeks later, as he would several times over the next few years before officially calling it a career in 1971).

Red Burnett of the Star noted that as Armstrong sat in the dressing room, he looked across the way to where rookie Mike Walton was shaving the shaft and blade of his hockey stick. 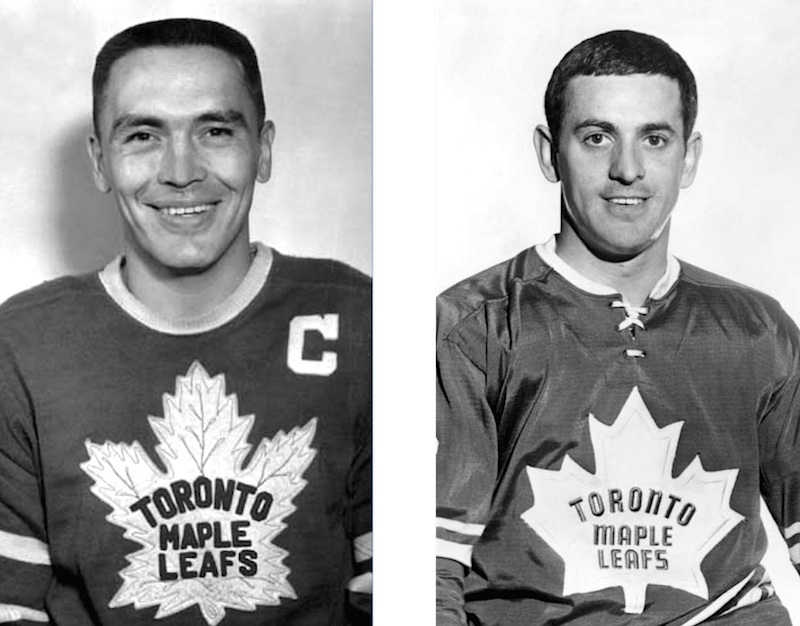 “I wonder how [Conn] Smythe and Hap Day would have acted if we’d tried those curved blade sticks in the days when I was a rookie,” mused Armstrong, although he knew that Walton was actually shaving his stick because he thought it was too heavy, not to try and deepen the curve.

“When Hap and Mr. Smythe were in charge, they insisted that every stick on the club weigh 23 ounces or better.” Armstrong explained that he didn’t like a heavy stick and would try to get by with a lighter one. However, “from time to time, Hap would take all the sticks out of the racks and weigh them. If you had a stick under 23 ounces, it was an automatic $25 fine. I paid a few fines before I got wise to the fact that you couldn’t fool the scales.”

Burnett relates that Smythe and Day had issued the order after Garth Boesch and Bill Barilko broke their sticks on the same sequence of plays, leaving the Leafs defence … well, defenceless.

That would have been between 1947 and 1950. “Times have changed,” Armstrong said. “Nowadays, the players have more say – and rightly so – in the type of equipment they use.”

Today, the average NHL sticks weighs about 400 to 515 grams. Converting 23 ounces into grams comes out to just a shade over 652. So, the sticks that Day and Smythe insisted on in the 1950s weighed as much as 50 percent more than the sticks of today. I’m sure that even with the shaving, Walton’s wooden stick was a lot closer to 23 ounces than it would be to the 400-gram composite sticks of today.

Personally, I have no comprehension of how the difference in weight and material effects shooting, but you only have to have watched a game in recent years to see how much faster players can fire the puck. Still, given the way even modern observers complain, you have to wonder what men like Conn Smythe and Hap Day would make of the fact that these $300-plus rocket-launchers seem to snap if you even look at them too hard!