I haven’t posted anything since June 27. Have you missed me?

I hadn’t meant to take all this time off. I’ve just been very busy. Since May, we’ve been back at work on the NHL Official Guide & Record Book, which is scheduled to head to the printer around the middle of next week. In addition, since about this time last summer, I’ve been working on 11 different book projects for five different publishers. Only one has come out so far. The others have, in some form or another, kept me busy all summer. A couple of them still aren’t done. (One of my brothers is always commenting that “I must be rich.” Sadly, all I am is busy!)

It seems the combination of too much work and too little fun following the Blue Jays has meant not enough time for stories on my web site. Tonight (although in reality two nights ago by the time I post this) has actually been the first time all summer that I’ve had a story pop into my mind that I couldn’t shake. So I wrote it down.

This has been a story I’ve been thinking about since June 20 … 2005! At that point, we were nearing the end of the NHL lockout that wiped out the entire 2004-05 season. It was really becoming possible to search newspaper archives on line, and I had been collecting stories on the early history of the Stanley Cup, which would eventually lead to a 2012 book. While doing that, I came across this story in the Edmonton Bulletin from August 18, 1908: 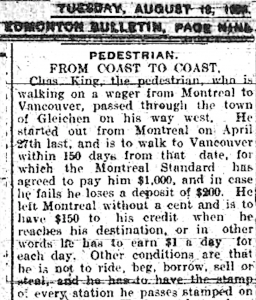 The story goes on to mention that Charles King carried with him a letter from Thomas Shaughnessy, president of the Canadian Pacific Railway, allowing him to walk across the country along the CPR tracks. He carried another letter from the Royal North West Mounted Police stating that he was “not to be molested.”

Something about this really spoke to me. I thought there might be a book in it too. So, within days of coming across the story, I had written to the Canadian Pacific archives in Montreal asking if they had any information on the Shaughnessy letter. They did not. (It’s been a few years since I last followed up, but archivist Jo-anne Colby promised to keep an eye out for anything for me.) An email to the RCMP Heritage Center in Regina also turned up nothing. I later searched through six months of issues of the Montreal Standard on microfilm, figuring that if the newspaper had a stake in this story they would be hyping it all summer long to try and boost their circulation. I found not one word…

Over the next year, I did come across a handful more stories of Charles King, mostly in newspapers in Western Canada, tracking his progress across the country. Some mentioned that King had developed his theories of nutrition and exercise at the Stymana club in Montreal … but I could never find any record of such an establishment existing. 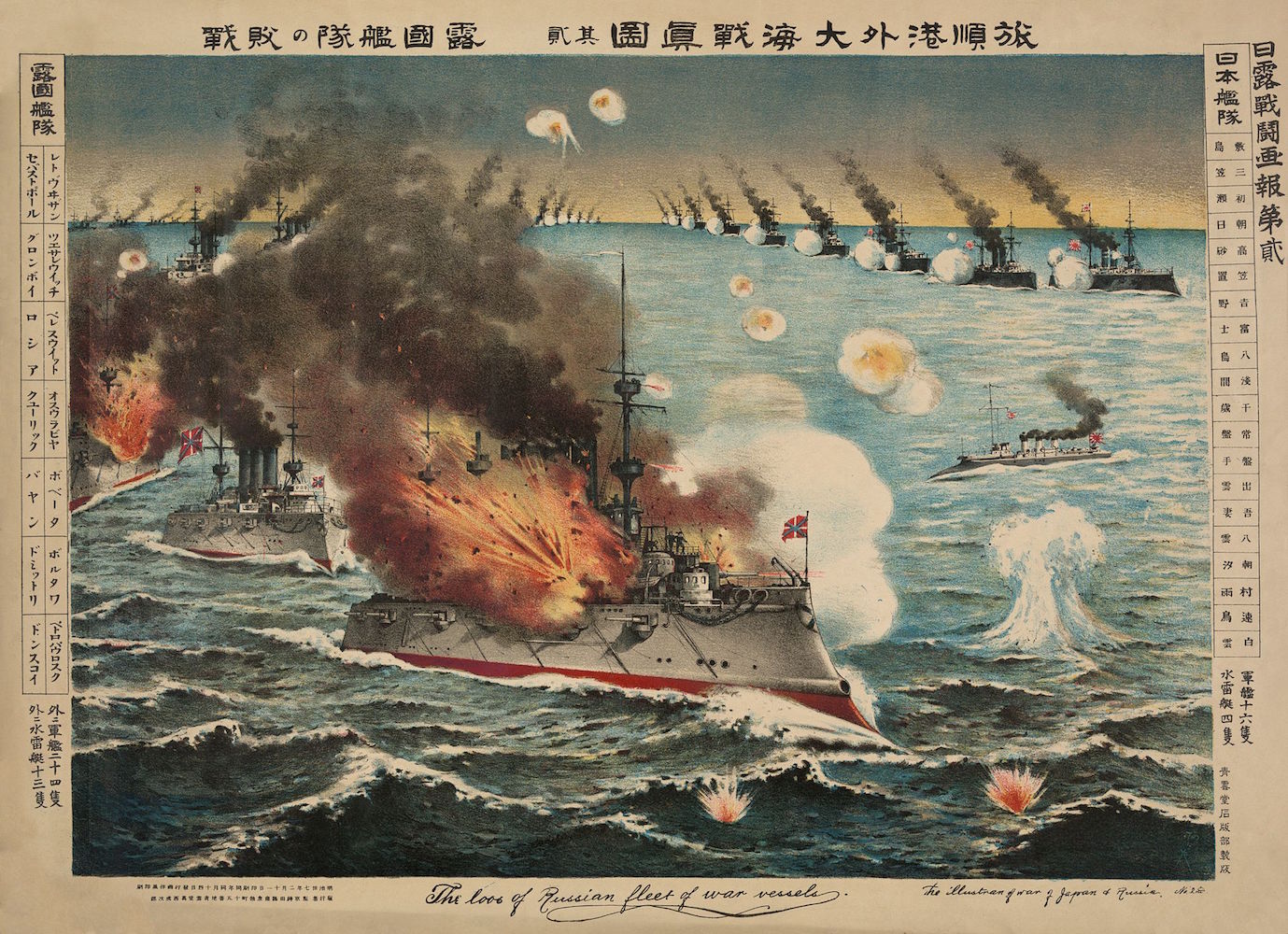 Japanese print displaying the destruction of a Russian ship at Port Arthur,
Manchuria. This image will make more sense if you keep on reading!

Several newspaper all across North America reported that King reached Vancouver on September 14, 1908 —  day 137 of his 150-day trek. According to some, he had only earned $120 of the $150 he needed, but he still had 13 days to earn the additional $30. Over the years, I’ve collected stories of his arrival in Vancouver  from 11 different newspapers … but I’ve yet to find a single one that followed up to report on whether or not he ever made the money he needed to win the bet. (Eventually, a story in the Vancouver World from Bellingham, Washington, on October 21, 1908, noted that “Charles King, who has just completed a walking trip from Montreal to Vancouver, B.C., winning a wager of $1000, arrived in the town of Nooksack yesterday and has proceeded on his way to Seattle…” so I guess he did earn those extra $30.)

Based on the stories I’d collected, I assumed Charles King must be from Montreal (I’d later find other stories indicating he was actually from Detroit) and that this was a Canadian saga.  But more recently, I’ve learned that King’s was a much bigger story. In April of 2015, I found stories in four different newspapers saying that he had left Seattle in March of 1909 to walk to New York … and that this dual crossing of North America was actually part of a bet that began on May 1, 1905 in Port Arthur, Manchuria, in which King had wagered that he could walk around the world within seven years.

I would later come across stories claiming that Charles Addington King was a former war correspondent who had covered the Spanish-American War (1898), the Boer War (1899-1902) and the Russo-Japanese War (1904-1905). Some stories claim that the bet he apparently made with publishing interests in London, England, was for $12,000 in gold.

In stories from the summer of 1909, as King was leaving St. Paul, Minnesota for Chicago en route to New York, he told reporters: “I am now seven months ahead of my schedule, or in other words, I am 5,000 miles to the good.” But I have yet to discover if Charles King made it back to Port Arthur by May 1, 1912. I’ve never even found any stories about him beyond that summer of 1909.