How is it, I was asked yesterday in the wake of recent news, that the National Anthem got hooked up with sports in the first place?

Although I had been asked specifically about hockey when I first looked into this back in 2009, the best answer I could find indicated that the practice of playing the National Anthem at sports events began when The Star-Spangled Banner was played during the 1918 World Series. That seemed reasonable to me, given that Major League Baseball cut short the regular season that year due to World War I.

However, I also found that, in a story in the Toronto Star from May 4, 1917, the National Anthem (presumably God Save the King) had been played prior to the Toronto Maple Leafs’ opening game of the International League baseball season. No doubt World War I was the reason again, but clearly, while the World Series of 1918 must have garnered more attention in the United States, it couldn’t have been the first time. [NOTE: See this later story from the Boston Globe on October 25, 2017.]

Yesterday, I asked John Thorn, the Official Historian for Major League Baseball (who I’ve known since 1998 when Dan Diamond and Associates created Total Hockey for John’s Total Sports Publishing company) what he knew about the history of the National Anthem and baseball. As it says in the sub-title of the article he sent me, the story goes “back, back, back.”

It turns out that the connection goes all the way back to the time of the U.S. Civil War. It was the opening game of the Union Grounds ballpark in Brooklyn, New York, on May 15, 1862, and the band on hand for the festivities began the musical proceedings by playing The Star-Spangled Banner. I think both John and I are only speculating at a direct connection between the War and the playing of the National Anthem that day, but it certainly makes sense.

I wrote about God Save the King being played prior to a game in 1910 in my very first book, the novel Hockey Night in the Dominion of Canada. The book was published 25 years ago and I honestly can’t remember anymore if I’d come across any evidence of this having actually happened at the time. (The book was fiction, after all!) However, the National Anthem was most definitely played prior to the opening home game of the Ottawa Senators early in the second NHL season of 1918-19.

This game between Ottawa and the defending Stanley Cup champions from Toronto was played on December 26, 1918, just a few weeks after the signing of the Armistice that ended World War I. Prior to the War, previous Governors-General had often attended games in the Canadian capital, but with the Duke of Devonshire in attendance that night, it marked the first time since before the war that, as newspapers put it, “the hockey season was ushered in under vice-regal patronage.” When the Duke and his party arrived shortly before the start of the game, the Governor-General’s Foot Guard “played the National Anthem and every person within the big rink stood up.” 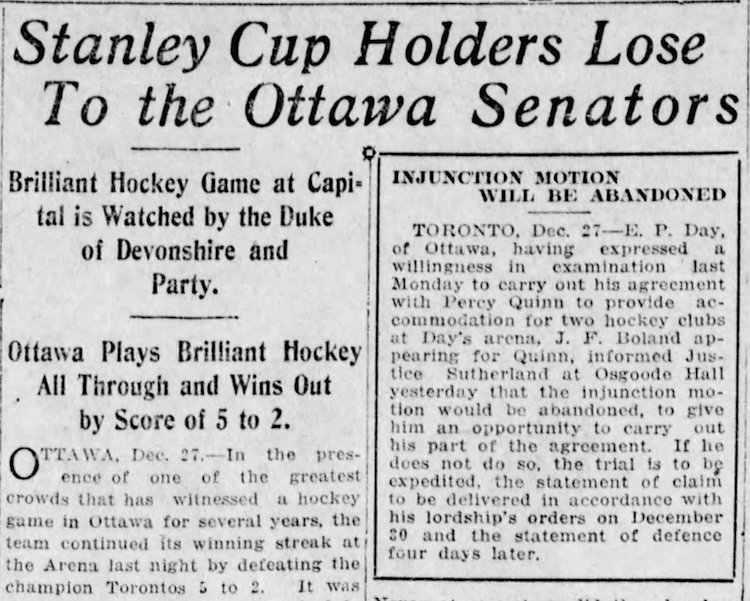 This article appeared in the Vancouver World on December 27, 1918.

But when did the National Anthem become a regular occurrence at sports event? Apparently, it wasn’t until 1924 in Paris that National Anthems were played for every winner at the Olympics. John Thorn’s story mentions that although some Major League Baseball teams had begun playing the National Anthem before games in 1941, which was prior to the U.S. entering World War II, it became universal in baseball in 1942 after American  involvement. I haven’t looked into the National Anthem and football, but it seems reasonable to believe the practice started in the NFL around the same time.

As for hockey, it’s been said that the tradition of playing the National Anthem prior to games began around 1930. This picture of the Boston Bruins and Montreal Maroons at the Boston Garden may well have been taken during the NHL playoffs in 1930. It’s often said to be an early example of the “new” trend. 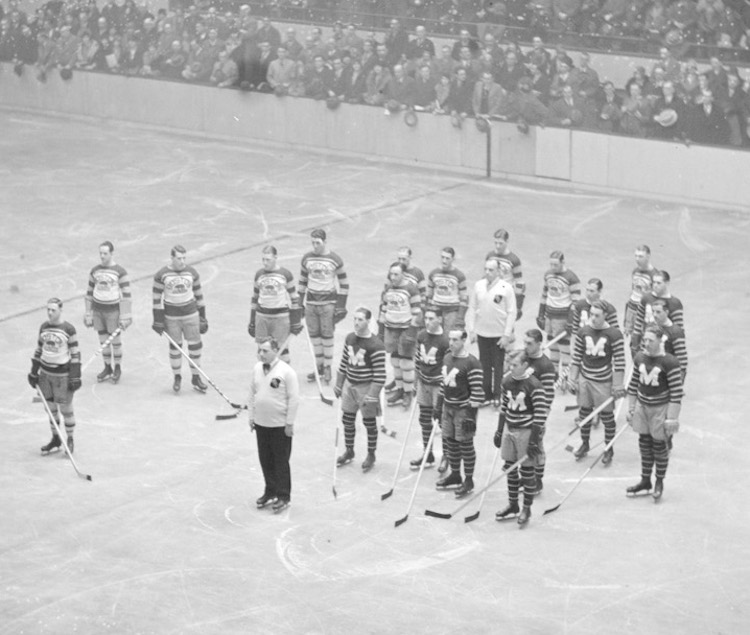 Certainly the practice seems to have been common enough that no special reason was needed when this article appeared in the Montreal Gazette on January 12, 1931: 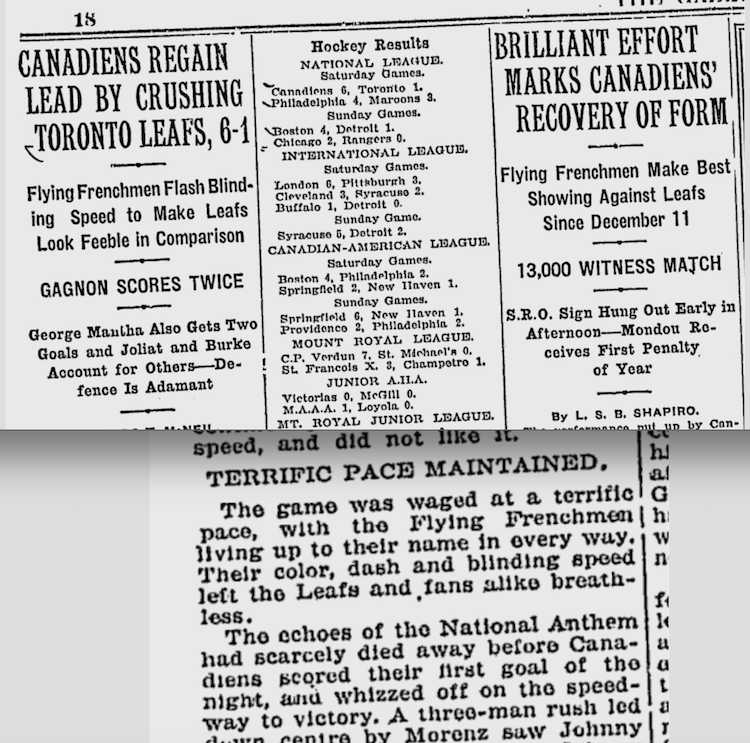 Still, there’s reason to believe that, even if it wasn’t continuous from 1918, the link between National Anthems and the National Hockey League dates back to at least the mid 1920s, and perhaps before that. When the first NHL game was played in Madison Square Garden between the New York Americans and the Montreal Canadiens on December 15, 1925, bands played both The Star-Spangled Banner and God Save the King prior to the opening face-off.

In the PhD thesis that would become the basis of his book Joining the Clubs: The Business of the National Hockey League to 1945, my friend and colleague Andrew Ross notes that Tex Rickard and John Hammond (who ran the Garden, and soon the New York Rangers as well) “maintained the Canadian tradition of playing the national anthems before every game, not just restricting them to special occasions.” This practice, says Andrew, “continued thereafter and spread from the Garden to other cities and other sports.”

Andrew quotes Hammond from an article in the New York World-Telegram in December of 1934 as saying that The Star-Spangled Banner had been played before all hockey games at Madison Square Garden since the very first. “The Canadian anthem has always been associated with hockey there,” Hammond said, “and I think we should pay our anthem the same tribute.”

So even if baseball started it, it looks like it was hockey that made the National Anthem a regular part of going to a game.

10 thoughts on “A History of Sports and The National Anthem”