With the team off to a great start, invitations to the Toronto launch of my new book, The Toronto Maple Leafs: The Complete Oral History, went out by email earlier this week. If you didn’t receive one, and you’d like to come, I’d love to see you! A copy of the invitation is included at the end of this story.

The Leafs were pretty much at the worst of their recent struggles when I began working on this book. Still, the only real direction offered by my editor was “give me lots!” I took that pretty literally. We always knew that the book was going to be 10 chapters long, but when I finished the first draft of Chapter 1, I was already over 25,000 words! By the time all 10 chapters were complete, I delivered a manuscript of almost 170,000 words. We’re talking 100 years of history here, but clearly that was going to be too much. During the editorial process, we got it down to about 140,000 words. With pictures, that still came out to a book of 450 pages!

Some pretty interesting stories didn’t make the final cut. Here’s one, presented in the “oral” style of the book, highlighting the rough, early days of the Toronto-Montreal NHL rivalry:

Before Toronto qualified for the playoffs (by winning the second half of the split-season schedule), Charlie Querrie and George Kennedy of the Canadiens had expressed differing opinions on the style of play the Torontos employed, particularly when they were at home.

“The Toronto team, according to the Canadien players, are a dangerous outfit. Dangerous in more ways than one, for in their own city they play a brand of hockey not attempted by any other club in the league. Any other team who tried it would land up in jail. In Toronto, however, the blue shirts get away with it themselves, but woe to any other foreign player who attempts to retaliate. It is the bench at once, and the presence of a burly policeman behind the penalty box is a grim reminder that the jail awaits all unruly hockey players in Toronto – who do not belong to the home team.”

“Manager George Kennedy of the Canadiens has had his bluff called. George, the wise one, spread a lot of false reports when he returned to Montreal after his two beatings here. Kennedy told the Montreal newspaper men that the Torontos did not play hockey, but just cut his players down. Manager Querrie of the blue shirts has gone Kennedy one better, and wants the sporting scribes of Montreal and the Peasoup public at large to know that every team that visits Toronto is given a fair shake.

“Manager Querrie despatched the following letters to Montreal yesterday, and they speak for themselves:

“Mayor Martin, Montreal: Dear Sir, – On behalf of the Toronto Hockey Club, I wish to extend to you a cordial invitation to attend the Canadien-Toronto game at the Arena Gardens here on Monday, Jan. 28. Reports have been sent broadcast thru the medium of the Montreal press to the effect that the Canadien team has suffered from intimidation and interference from the police of this city, and we would be delighted to have you attend the fixture and see for yourself if this is true or otherwise

“We will reserve a box for yourself and party, and trust that you will be able to be in attendance.”

“George Kennedy, Montreal: Dear Sir, – As you have repeatedly made excuses for your club’s defeats at the hands of the Toronto hockey team at our Arena, claiming roughness and intimidation, we would advise you to extend an invitation to the sporting writers of Montreal to attend our next fixture here, on Monday, Jan. 28. We will place every facility within our power at their disposal to see for themselves how visiting teams are treated at the Arena. In view of the fact that you have claimed that your club has been defeated here by unfair tactics, this will be an excellent opportunity for you to show the Montreal scribes just how badly your team is treated in the Queen City.”

“Mr. F. Calder, President National Hockey League: Dear Sir, – Our club would be pleased if you would attend the game here on Monday, 28th January with the Canadiens.

“During the past few weeks Manager Kennedy of the Canadien Club has stated thru the press that his players are roughly used here, and also intimidated by the police.

“To judge for yourself, and in the best interests of hockey, we would be pleased to have you in attendance.”

It’s unclear if Kennedy or Calder were in attendance on January 28. Toronto won the game, 5–1.

“All the goals were scored in the opening period. Toronto started off with a rush and in the first five minutes counted twice. When the period was finished Toronto had five goals to one for Canadiens. There was no further scoring.”

But the score of the game was not the biggest story that night. 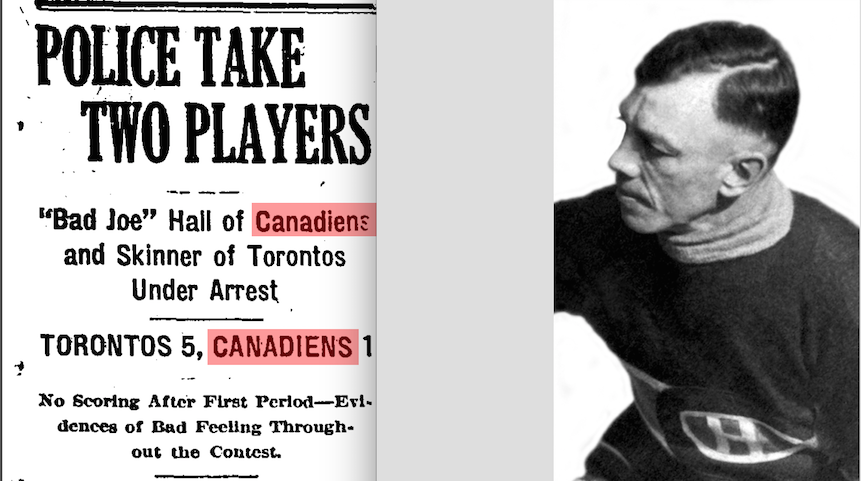 “‘Bad’ Joe Hall of the Canadiens and Alf Skinner of the Toronto team are under arrest as the result of an assault and counter-assault which occurred in last night’s game between the two teams at the Arena. Toronto defeated the Canadiens by a score of 5 to 1 in a game in which there was an under-current of feelings that was responsible for many minor outbreaks throughout the contest. The collision which resulted in the arrest of the two players occurred shortly after the start of the final period. Skinner took the puck down the ice and was checked by Hall. He dropped to the ice and as he did made a pass with his stick at Hall, who was standing over him. Hall raised his stick and brought it down upon Skinner’s head and the latter was carried from the ice unconscious.

“Hall was immediately penalized and left the ice, holding his hand to his mouth, while blood stream down the side of his face. The police visited the dressing-room a few moments later and placed both men under arrest. They were later admitted to bail, and will appear in the Police Court to-day on a charge of disorderly conduct.”

“Both players were put under arrest by Plainclothesmen Ward and Scott and taken to No. 2 police station. Manager Querrie later bailed them out. The charge was common assault.” 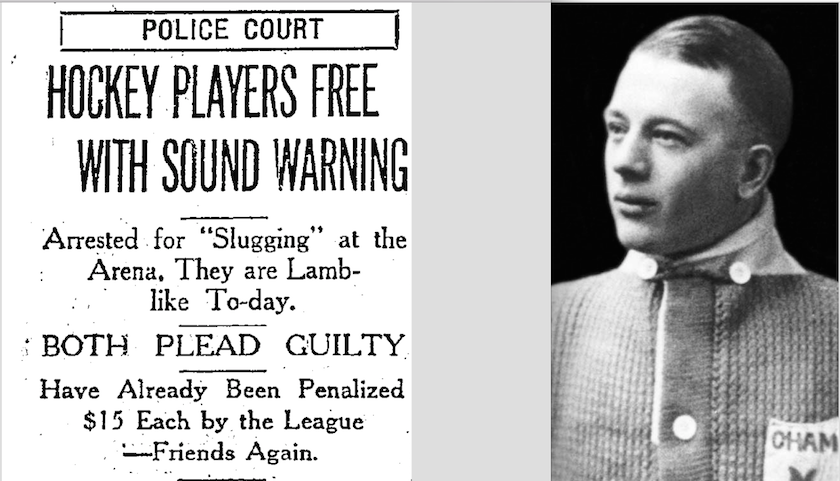 “Like a blessed peacemaker, more prone to pity than to punish, Squire Ellis to-day remanded for sentence Alfred Skinner and Joseph Hall, the two hockey players, members respectively of the Torontos and the Canadiens, who were arrested for disorderly conduct after the game at the Arena Gardens last night. ‘As the matter has apparently been settled to the satisfaction of all parties out of court, there will be no punishment here,’ remarked his Worship. The two erstwhile opponents who had whacked each other over the heads with hockey sticks in the heat of contest, smiled like brothers as they entered a plea of guilty. ‘They are the best of friends to-day,’ said their counsel, W. Hoskins, adding later that hockey games could not be played without a rap or two being given. Sergt. McKinney made an eloquent plea for clean sport. ‘Fracases like this are going to ruin sport,’ said he. ‘The public don’t want to see slugging matches.’ The sergeant further stated that Hall was the aggressor.

“Manager Querrie, who had been an attentive listener, informed the court that both men had already been fined $15 by the league. Apparently satisfied that they had been sufficiently punished, Squire Ellis forthwith bade them depart in peace, but not before he had said that the conduct of some hockey players was enough to disgust the public.” 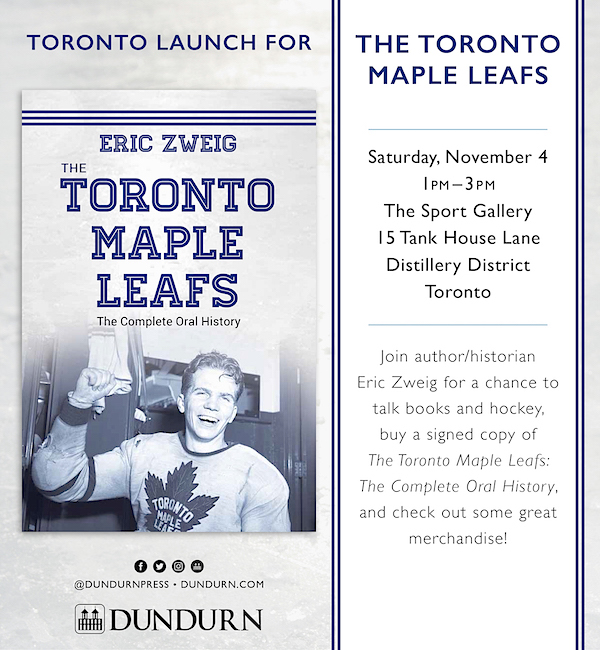