I wasn’t going to write about Roy Halladay. After all the tributes to him I’ve read since his death was confirmed late Tuesday afternoon, I didn’t really think I had anything to say. I’d already had a story in mind for today, but it didn’t feel right to write about something and not to mention Halladay at all. Or to just tack on a word of condolence to a different story. So, allow me a few moments to share some thoughts.

As many of you know, my entire family has been huge Blue Jays fans from the very beginning. We’ve had seasons tickets since the moment they went on sale prior to the first season in 1977. I worked on the ground crew for five years from 1981 to 1985 when the team literally went from worst to first, and although I don’t get to more than a game or two most seasons these days, I still watch or listen almost every day. The Blue Jays have meant a lot to me over the years. Probably more than they should.

Strange thing is, I’ve never been a “favourite player” type of guy. I like the team; I like the game; I like being a fan … but I’ve never had a jersey for the Blue Jays or the Maple Leafs with a name and a number on the back. That’s just not me. If forced to pick, I’d agree with the general consensus that Roberto Alomar was the best Blue Jay ever. But my own personal favourite would be a toss up between Dave Stieb and Roy Halladay. I do like good pitching. 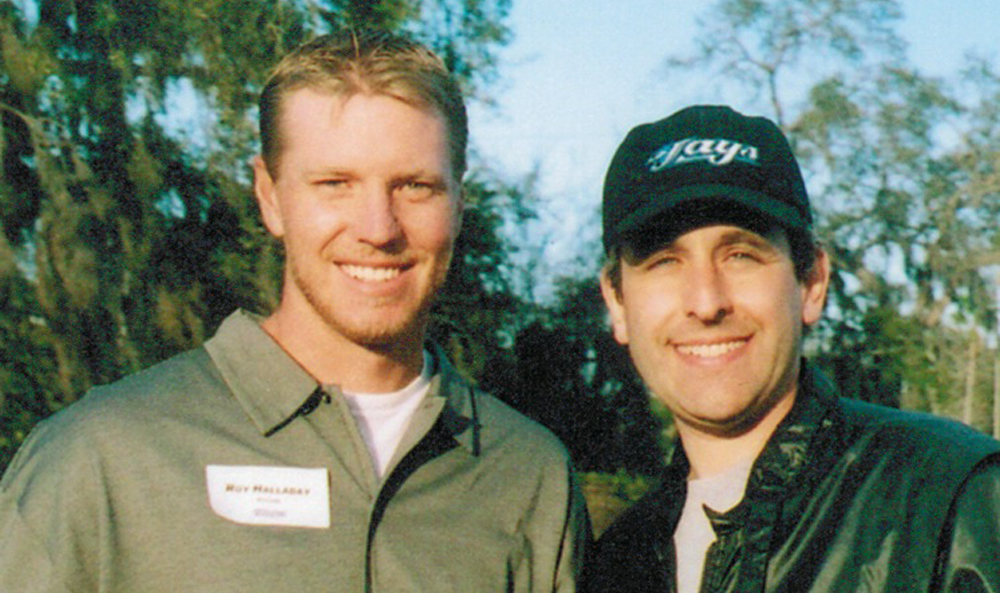 Roy Halladay posed for this picture with me at Spring Training circa 2006.

I was there on the final day of the 1998 season when Halladay had a no-hitter broken up with two out in the ninth inning of his second career start. (I read in a newspaper yesterday that it was a perfect game, but although Halladay hadn’t walked anyone, second baseman Felipe Crespo had made an error in the fifth inning to allow a baserunner.) It was an exciting game, but I can’t honestly say that I felt like I was watching the birth of baseball’s next great pitcher.

And, indeed, Halladay struggled until pitching coach Mel Queen famously helped him to overhaul his mechanics and his mental approach to the game when he was sent back to the minors after spring training in 2001. When Halladay returned to Toronto that July, he struggled briefly … and then was brilliant. He had only a 5-3 record that season, but his 3.16 ERA was impressive and I remember clearly believing that he should have won at least eight games, not just five.

From then on, Halladay was the player I wanted to see. I admired his skill, and I admired his dedication. If I didn’t have access to our family’s season tickets (and we were sharing them around pretty widely by those years), I’d still happily pay for a cheap seat to get into the park when Halladay was pitching.

My mother-in-law had the picture reproduced on a ball, which Halladay signed the next year.

I remember late in the 2003 season. The Jays weren’t horrible that year, but were hopelessly behind the Yankees and Red Sox (as they always were in those day!) and not in contention for the wild card either. Now a Cy Young favourite, Halladay had won his 20th and 21st games on the road, and was pitching back at home on a Monday night, September 23. I wanted to be there to see him win his 22nd game and set a new team record. I took our daughter Amanda and bought a pair of seats, the two of us sitting among a fairly sparse crowd of just under 23,000 people in the 50,000-seat stadium.

There had a been a bit of bad blood recently between the Blue Jays and Tampa Bay Devils Rays, and – apparently – warnings had been issued to both teams before the game, although no one had told Halladay. In the sixth inning, after giving up a lead-off homer to put the Jays down 1-0, followed by a single, the third batter was hit by pitch … and Halladay was ejected. The crowd was pretty angry. I was incensed!

“I don’t know where it came from,” Halladay said after the game. “But in … a 1-0 game and a man on base, that run is important to me. I’m just trying to get out of the inning, I can’t see why they would think I’m trying to hit someone.”

To make matters worse, reliever Dan Reichert (who?!?) promptly gave up a walk and two straight hits to allow both of Halladay’s base-runners to score. Yet another hit put us down 5-0. The Jays lost 5-2.

“Doc’s out there trying to win a Cy Young and he gets charged with three earned runs without having the chance to get them off the field,” said Jays GM J.P. Riccardi. “Maybe common sense could have been used, you know?”

I wasn’t there when Halladay won his 22nd game on the final Saturday of the season. And, of course, he did win the Cy Young Award that year.

Such was Halladay’s skill and dedication, that almost no one in Toronto held it against him when he asked to be traded to a contender after the 2009 season. My brothers and I often joke that when anyone gets traded away, “we wish them nothing but the worst” with their new team. Not Halladay. I was pleased to watch his success in Philadelphia at a distance, and thrilled to have been watching on television when he threw a no-hitter in his first postseason appearance in 2010. He was just that good.

Celebrity deaths don’t usually affect me, but the death of Roy Halladay has been hard.