A contract arrived by courier on Monday for a new hockey book for kids. This one won’t appear until the fall of 2019, but I’m awaiting another contract for two other books (updates to older projects) for adults that should be out this fall. So, after some slow times lately, at least I’ll be busy again for the next little while.

I sort of fell into writing for children, but I enjoy it. The truth is, in most cases, I don’t do anything very much different than what I write and research for adults – it’s just that the books are generally much shorter, so they don’t take nearly as long. 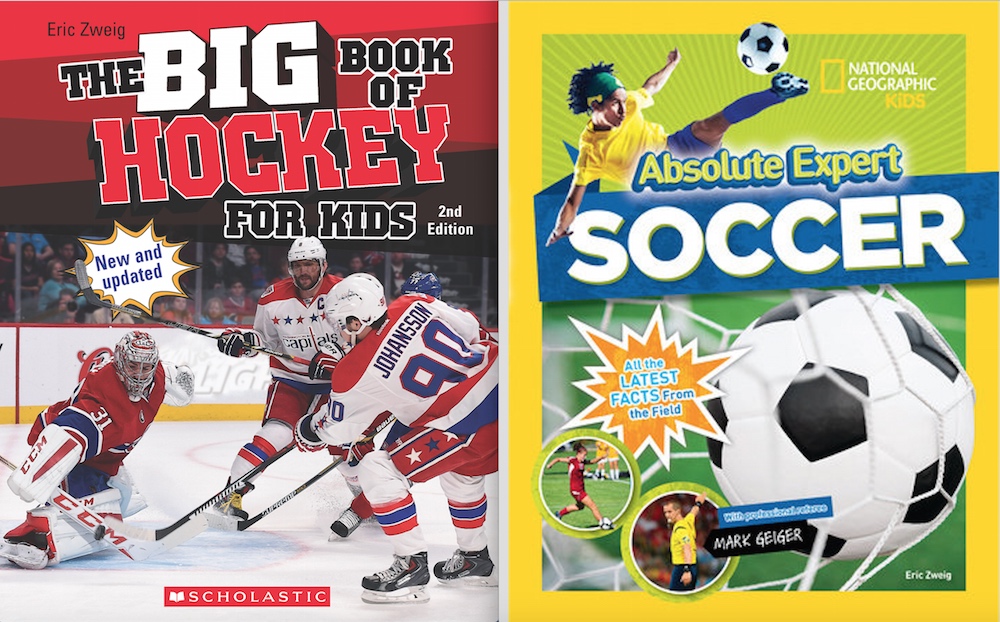 The 2nd edition of The Big Book of Hockey for Kids has been out since September.
Absolute Expert: Soccer is due out in late May in time for the World Cup.

As I’ve mentioned here on occasion, I currently have seven new children’s books in stores, with one more due out in the spring. That one is somewhat different for me in that it’s about soccer, not hockey. Fortunately, since it’s for National Geographic Kids, they were much more interested in a book about the history and geography of soccer than a “how-to-play” manual … despite the title! It’s a beautiful book, and the research for it was a lot of fun. Plus, I was paired with US Soccer and MLS referee Mark Geiger, who was most helpful when I had questions. He also wrote some great personal stories that appear throughout the book. 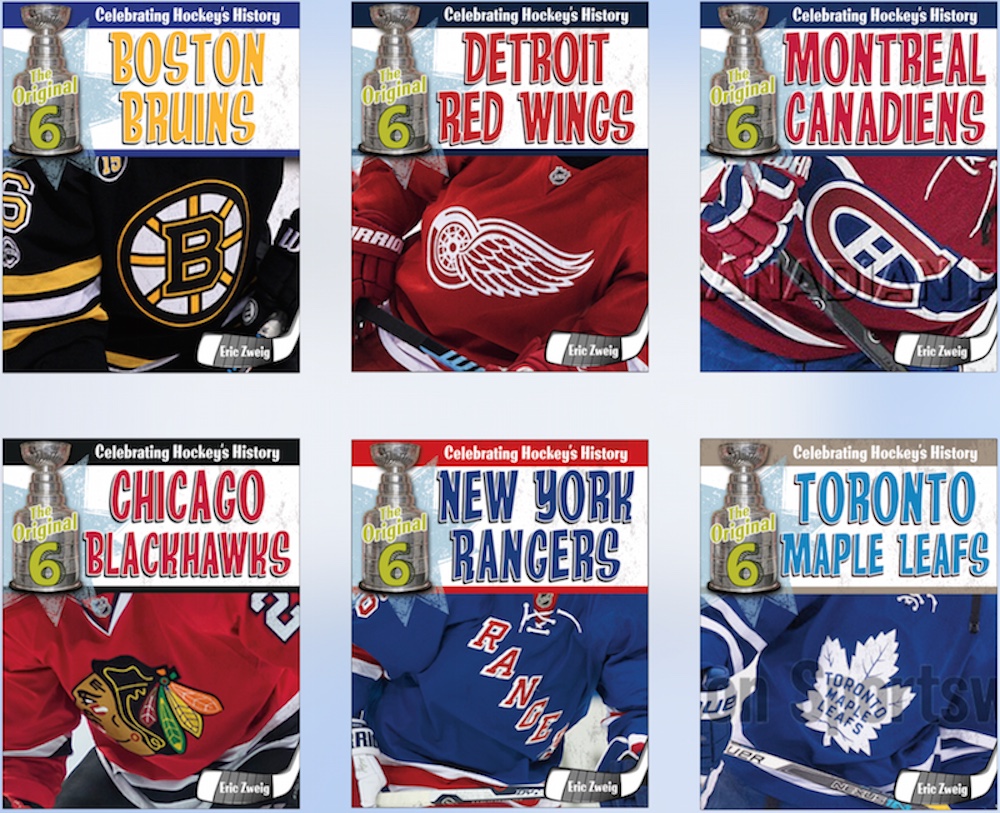 I think you’d be surprised at how many of the stories I’ve posted on this web site, as well as how many stories for my adult books, and how many updates and corrections to the NHL Official Guide & Record Book, have come from discoveries I’ve made while researching and writing my children’s books. For example, all the information I discovered for the story I posted last summer about Godfrey Matheson came as a result of the Chicago Blackhawks book in The Original 6 series. The genesis of today’s story comes from the New York Rangers book. 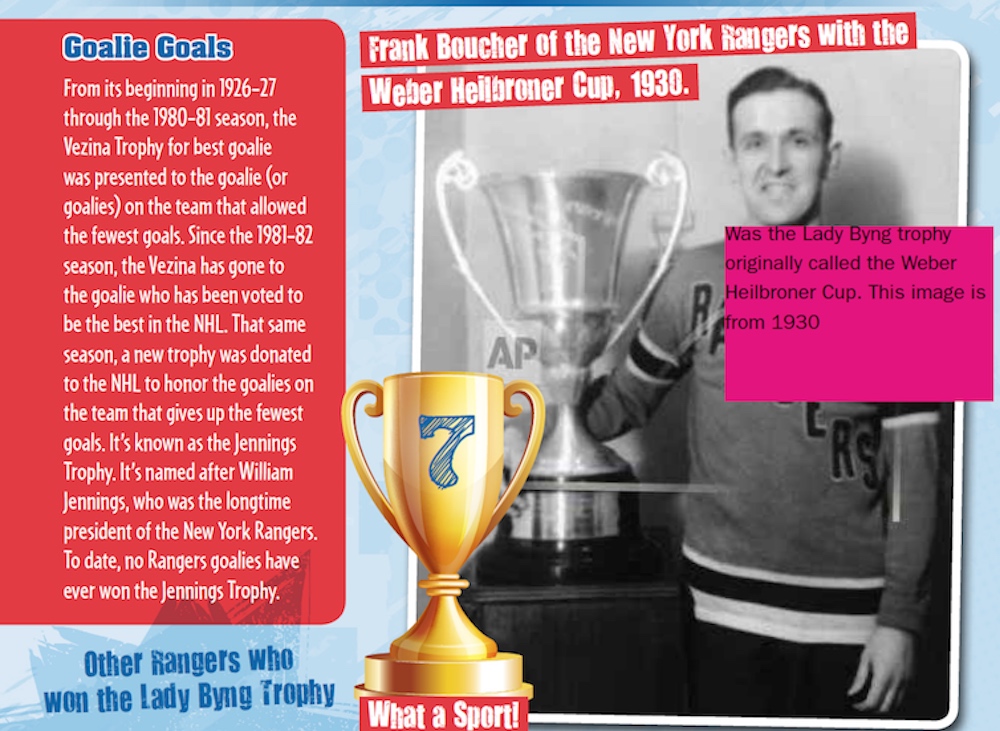 Each book in The Original 6 series features a section on NHL trophy winners from those teams. Clearly, the designer who queried me had hoped to find a photograph of Frank Boucher with the Lady Byng Trophy. But it seems that no such photo exists. It turns out that until Boucher was given the original NHL prize for sportsmanship to keep in 1935 after winning it for the seventh time in eight seasons, he’d never even seen the trophy before! As for the Weber & Heilbroner Cup, it was presented to him prior to a playoff game with the Ottawa Senators at Madison Square Garden after the 1929-30 season for scoring the most points among Rangers and New York Americans players that year. (Weber & Heilbroner was a fashionable menswear chain in New York.)

The article on the left is from the Brooklyn Daily Eagle on March 24, 1930.
The cartoon on the right is from the Ottawa Journal on March 16, 1935,
shortly before Boucher won the Lady Byng Trophy for the seventh time.

It appears that until the 1960s, the practice of handing out trophies to NHL players (as opposed to just announcing who’d won them) was hit and miss. The Hart Trophy for the NHL’s most valuable player was donated to the league in 1924. It was presented to the first winner – Frank Nighbor of the Ottawa Senators – on the ice prior to the final game of the NHL playoffs on March 11, 1924. The presentation was made by Lord Julian Byng, Canada’s Governor-General at the time. Almost exactly a year later, Lady Evelyn Byng presented Nighbor with the new trophy she’d just given to the NHL.

In the following  years, it appears that sometimes the NHL trophies were presented on the ice, and sometimes at team banquets for Stanley Cup winners when those teams also boasted an individual award winner. And, obviously, based on Frank Boucher’s experience, sometimes they weren’t presented at all. But one trophy always was. Beginning in June of 1937, NHL president Frank Calder presented each winner of the rookie of the year with a trophy he bought for that player to keep. After his death in 1943, the NHL created the Frank Calder Memorial Trophy as a permanent remembrance. 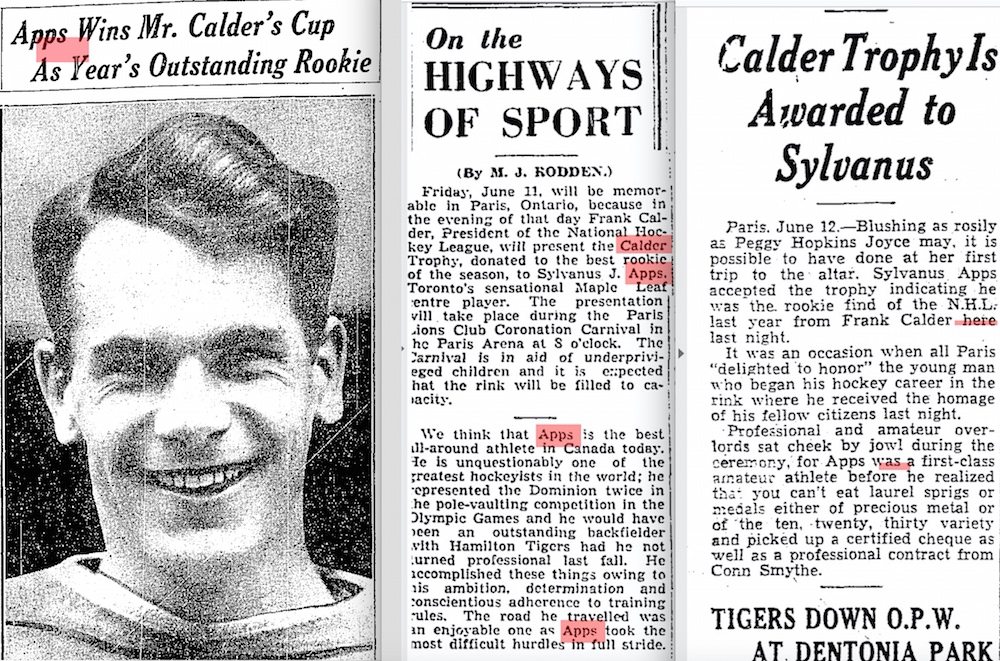 Syl Apps was the NHL’s rookie of the year for 1936-37. Writing in the Toronto Star on June 14, 1937, Andy Lytle says that it was he who’d suggested the trophy idea to Frank Calder, and that Calder decided while on the train to Paris, Ontario, from his office in Montreal that because the winners would never be rookies again, they should get to keep the trophy.

The earliest reference I’ve  found in newspapers to a modern NHL Awards ceremony dates to April of 1967, although the stories for that year refer to it as “the annual awards luncheon” so it must have been going on for a few years by then. (There had been an NHL luncheon or dinner associated with the NHL All-Star Game pretty much since its beginning in 1947, and a postseason luncheon since at least 1963. Hockey Hall of Fame inductees were announced at the 1963 luncheon, but there appears not to have been any trophy presentations.) 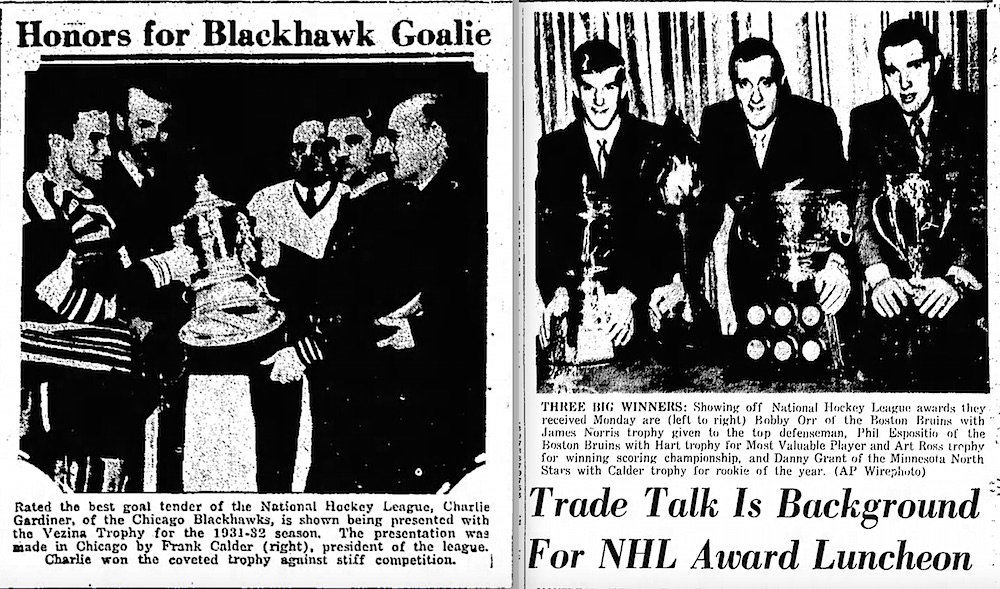 This photograph of Charlie Gardner receiving the Vezina Trophy (minus its elaborate base) appeared in several newspapers following the presentation to him on March 29, 1932.
The AP Wirephoto on the right is from the 1969 NHL Award Luncheon.

During the 1970s, the NHL Awards ceremony changed from a luncheon held during the Stanley Cup Final to a dinner held after the playoffs were over. The NHL Awards were aired on live television for the first time in 1984.

3 thoughts on “Writing and Research and The NHL Awards”