The very first thing I wrote in my first post to this web site four years ago said: “My favorite part of writing is doing the research. I love to look things up.” That was true back in 1990 when I began working on my first book, Hockey Night in the Dominion of Canada. It remains true to this day. It was never more true than when I was working on Art Ross: The Hockey Legend Who Built the Bruins. It was never more fun either!

When I set out to write a biography of Art Ross, I had no idea where it would lead. I certainly had no inkling of the family saga I would get caught up in. The Ross genealogy – even without any connection to hockey – was simply fascinating! I have already written about my efforts to track down a correct birth date for Art Ross, but that’s hardly all…

When I first connected with Art Ross III in the fall of 2005, I had already stumbled onto the fact (via the 1901 Canadian census, which had only recently come on line) that when Art Ross was growing up in Montreal in the late 1890s and early 1900s, his mother was married to a man who was not his father. This other man was Peter McKenzie. 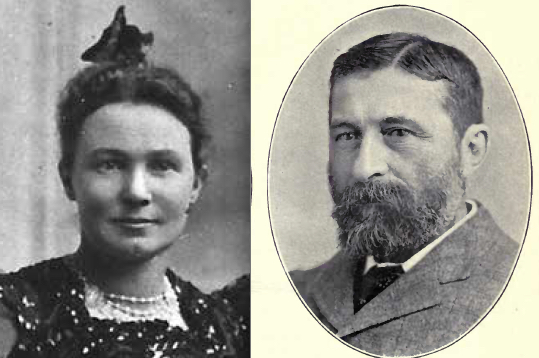 When she was young, the future Margaret Ross/Maggie McKenzie was said to be
the most beautiful woman in the Saguenay region. The young Peter McKenzie
was a handsome man of his era.

The story, as Art III heard it from his Uncle John, was that Thomas Barnston Ross had left his family “early and penniless.” While admitting that his father had not welcomed questions about what happened, John Ross had formed his own opinions. Barney – as those of us who have researched the heck out of this family call him – “might have (probably) taken his own life.”

Art and I soon discovered that wasn’t true. Records from the Hudson’s Bay Company (Thomas B. Ross was a fur factor) note that he died in 1930. Yet those same records said that Barney’s widow, Marguerite (Margaret) McLeod Ross – we call her Maggie – had married Peter McKenzie (who was himself a high-ranking HBC official). But given that they were married in December of 1895, Maggie was obviously not a widow! 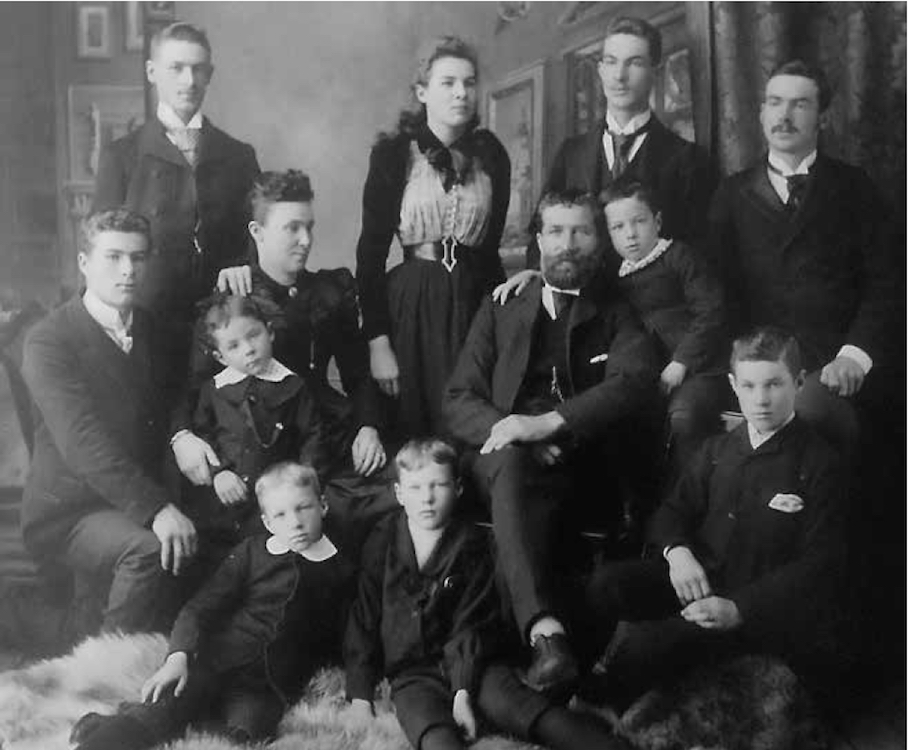 The Ross family circa 1891. The bearded man in the middle is Thomas Barnston Ross.
A young Art Ross leans against his shoulder.

As Art and I puzzled about this and other family mysteries (we communicated mostly by email – but often!), we were soon joined in our online endeavours by Serge Harvey. Serge is a distant relative of Art’s through Barney’s father’s family. Serge later connected us with Helen Webster, granddaughter of Thomas R. Ross, who was an older brother of the hockey Art Ross. (I’ve yet to mention here that Barney and Maggie had 10 children!)

Both the Ross and McLeod families had been prominent in the history of Quebec’s Saguenay district. Serge had found all sorts of fascinating family history in the Quebec archives. Helen had access to letters written by Maggie herself. So, eventually, we were able to put together bits and pieces of the story of a marriage that fell apart. 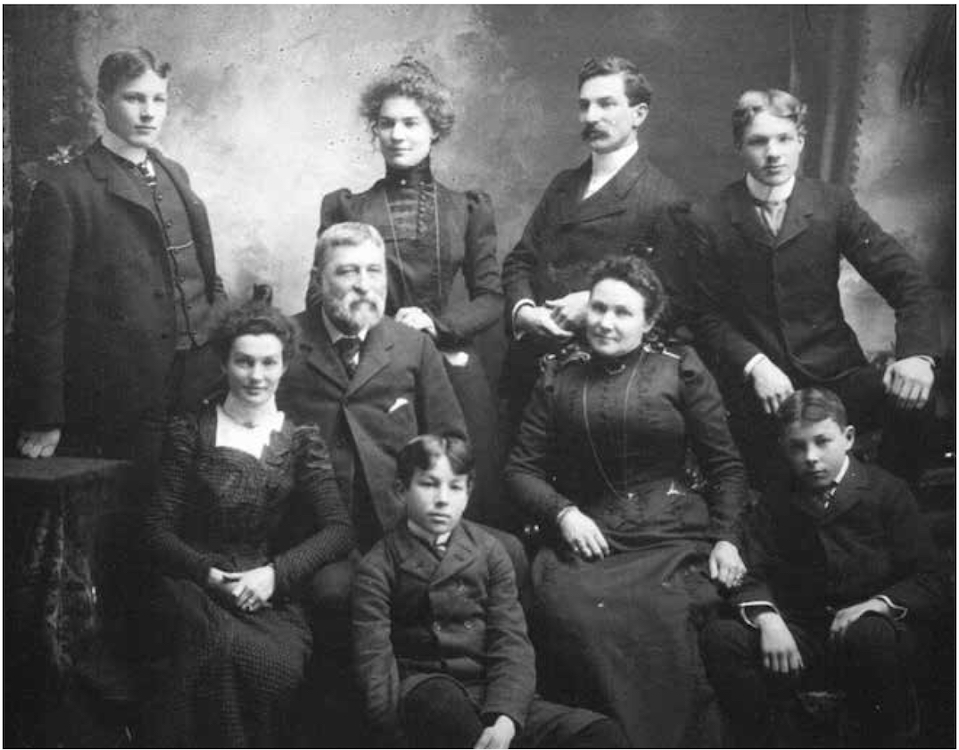 The Ross family circa 1900. Barney is out of the picture. The bearded man
in the middle this time is Peter McKenzie. Art Ross sits in front of him.

Still, there was one thing we could never determine. Though Maggie and Barney both remarried, had they ever actually been legally divorced? Art and I both came to believe that Maggie had to be a bigamist – though it always seemed odd to me that she and Peter McKenzie moved so well through Montreal society if that was the case.

Serge searched even more diligently through Canadian divorce records than I did. (It was very difficult to get a divorce in Canada right up until 1968.) He wrote to church officials and searched through provincial records in Quebec. Nothing! He also concluded that Barney and Maggie must have been bigamists. While I don’t believe I have any emails from Helen stating it so bluntly, I think she felt the same way too. 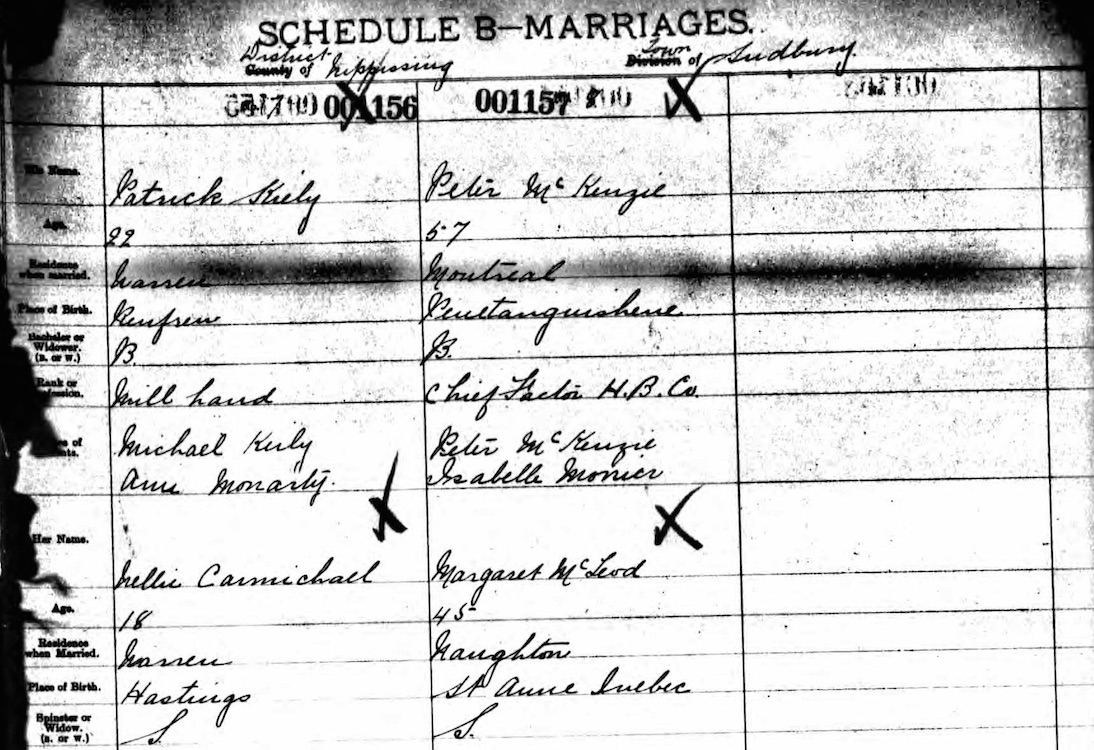 Peter McKenzie married Maggie on December 26, 1895, in Naughton, ON near Sudbury.
This is a segment of the record of their marriage from the Ontario Provincial Archives.

But enter a new character in our modern Ross family adventure. Darlene Ackerland is a descendant of Charles Ross, another of Maggie and Barney’s 10 children. In October of 2017, she connected with Art III as a DNA match through the Ancestry.com web site. Darlene has been a dynamo in chasing down her family story!

Now, admittedly, I am not actually a member of the Ross family. My interest is a lot more narrow than the others and when it all became a little overwhelming for me, I asked kindly to be removed from the flurry of new email activity. Still, I did say that if Darlene ever came across a divorce record for Maggie and Barney, I wanted to know about it…

Well, last Thursday, Darlene wrote the gang (me included) saying she thought she had found it. The names – as indicated in a hint through Ancestry – were a perfect match … but the location was odd. North Dakota? 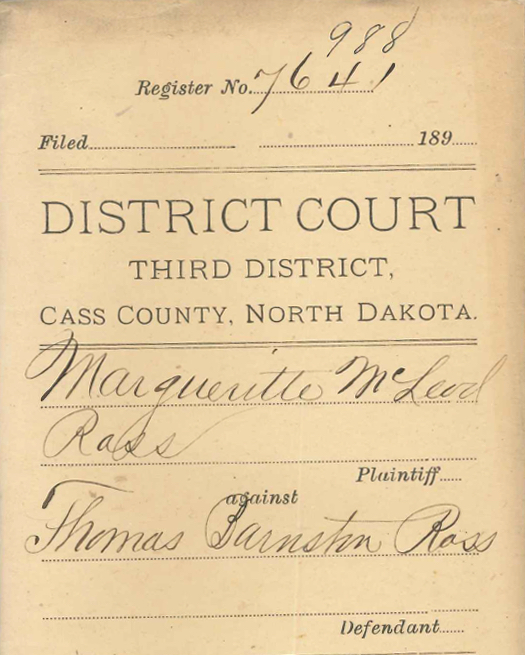 From the records of the Ross divorce, housed in
the archives at North Dakota State University.

“What do you all think?” Darlene asked.

It so clearly seemed that it must be them, and yet I wondered to the group: “Do we think they were divorced in North Dakota? Like the way people used to go to Reno?”

Now it was time for my research skills, although it turned out to be pretty simple. A few key terms on a Google search, and I discovered that North Dakota in general, and Fargo in particular, was the Divorce Capital from 1866 to 1899. People from all over the world flocked to Fargo for divorces. An entire industry sprung up around it. It wasn’t cheap, but it was fairly easy – and there was even a clever way to get around the three-month residency requirement. People would apparently take a train to Fargo, leave their luggage in a hotel for 90 days, and then return to pay the bill and collect their divorce.

More from the records of the Ross divorce.

Serge wrote to North Dakota State University for copies of the divorce proceedings, which arrived as pdfs by email on Monday. It really is “our” Maggie and Barney, with Maggie initiating the proceedings against a reluctant husband. And so it was that in January of 1895, they really were legally divorced. No bigamy. Instead, confirmed drunkenness, cruelty and possibly even adultery. Wow!