Even before the recent change in the stories I’ve posted to this web site, much of what I wrote —even some of the nerdiest of the hockey nerd stuff — was for Barbara. As I’ve said before, a big part of my enjoyment in all this was to see how she’d react. Quirky just hasn’t been as much fun without her.

This story — while not nearly as “romantic” as some of my recent ones — is definitely for Barbara. But, as is often the case, you have to let me work my way around to it…

This past weekend, the British and Polish air forces honored the 75th anniversary of the Great Escape — the actual breakout from Stalag Luft III, the Nazi prisoner-of-war camp in the town of Zagan (sometimes written as Sagan), now in eastern Poland. The events took place in the late night and early morning hours of March 24 and 25, 1944. 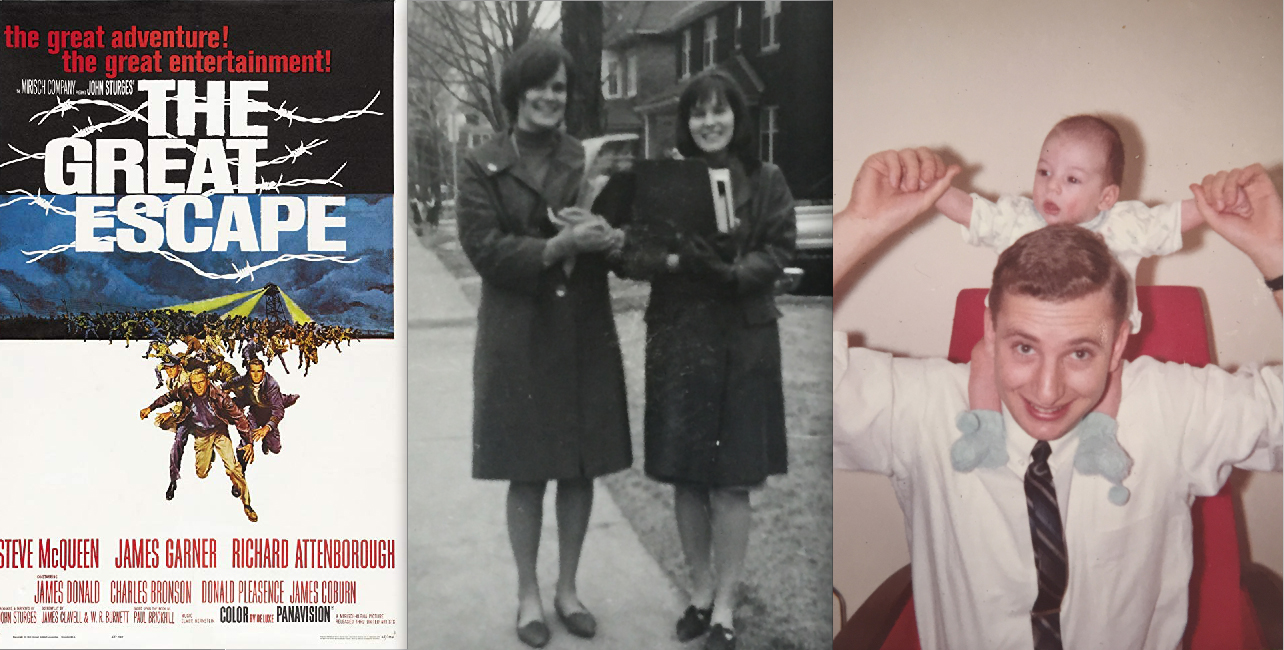 The movie came out in 1963. Barbara (on the right in the center photo) is with her
friend Peggy around then. That’s me with my father about the same time!

I won’t go into much of the story, but the Allied air force prisoners at Stalag Luft III had hoped to free some 200 men through a series of tunnels dug under the camp. They knew it was unlikely that any would make their way back to England, but they hoped to do as much as possible to disrupt the German forces who would have to chase them down. Due to a series of unforeseen circumstances, only 76 men got out before the Germans discovered what was going on.

Over the next few weeks, all but three men were recaptured. Hitler was so angry he wanted all 73 men shot. Other German authorities pointed out that an action showing such blatant disregard for the Geneva Conventions might endanger the lives of German prisoners held by the Allies. Even so, Hitler personally ordered that “more than half” should be shot. In the end, 50 men were killed. It’s the deaths of those 50 that was commemorated in Poland this past weekend.

Barbara first learned of this story — as did so many other people — when the Hollywood movie The Great Escape came out in 1963. Even then (and ever since she was a little girl), if Barbara was interested in something, she was INTERESTED! It wasn’t enough just to see the movie — which, of course, she did — over and over. She needed to know more! So, she got herself a copy of the 1950 book The Great Escape by Australian Paul Brickhill, who’d been held at Stalag Luft III during the War. 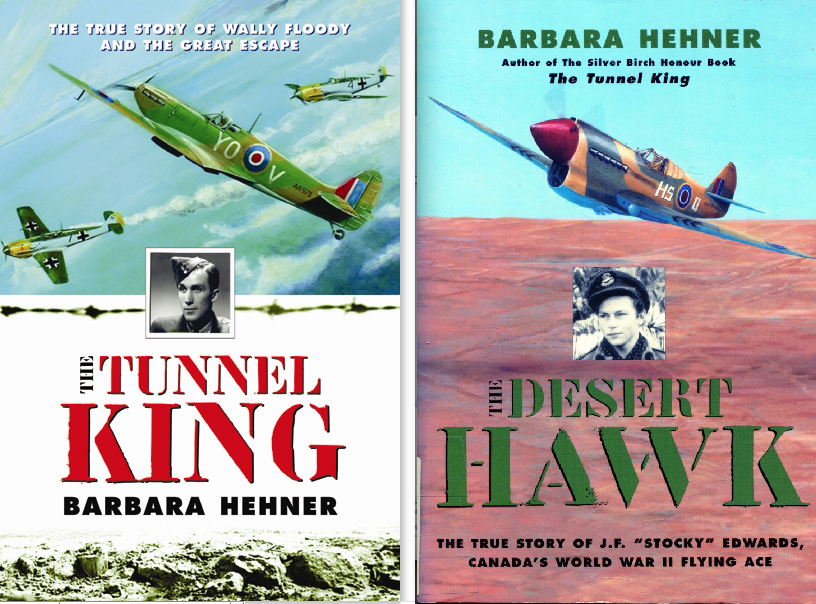 Barbara told the story of Wally Floody in her book, The Tunnel King. The Desert Hawk
is about Stocky Edwards, one of the leading Canadian aces of World War II.
She worried about glorifying war in books for children, but felt it was important
to put a human face on what happened.

It was through Brickhill’s book that Barbara first learned about Wally Floody, the Canadian who was so integral to the tunnel construction for the Great Escape. (The movie is actually a very accurate description of events – up to a point! – although there were a lot more Canadians, and a lot fewer Americans, who were involved.)

Wally Floody (the Charles Bronson character in the movie is based loosely upon him) lived most of his life in Toronto, not far from where Barbara lived most of her Toronto life. Older accounts of him always claimed that Wally was a mining engineer in Canada, and that’s why he was in charge of the tunnels for the Great Escape. But that was just a bit of British prejudice. The Brits simply couldn’t wrap their heads around the fact that someone who’d actually worked in the mines might one day become a fighter pilot. Wally worked in both Timmins and Kirkland Lake as a young man, although his experience with hard-rock mining there was very much different from tunnelling through the sandy soil beneath Stalag Luft III.

Barbara always believed that Wally’s true story was worth telling, and she finally got to write about him in her 2004 book The Tunnel King, which was a big success. Floody had died in 1989, and Barbara regretted that she’d lived in Toronto for 20 years by then and had never tried to meet him. Wally’s wife, Betty, died just around the time that Barbara started working on the book, but she did get  a lot of assistance from Wally’s sister, Catherine, and his son Brian. They were both more than happy to share stories – and photographs – of their brother and father.

Wally Floody (left) wears his cap at the proper rakish angle for a
fighter pilot. He married his wife, Betty, very early in his air force career.

Just recently, I received a very nice letter from a man who works at the Museum of Northern History in Kirkland Lake. The city is celebrating its 100th anniversary this year, and the museum is interested in telling Wally’s story among their centennial celebrations. His letter gave me the occasion to get back in touch with Brian Floody, and it got me thinking about all this again.

One of Barbara’s nerdiest interests was her love of movie soundtracks. Not just songs, but the full score. If a movie she liked happened to be on television and she was in the other room, I used to like to turn it up loud and see how long it took before she’d say, “Is that … To Kill a Mockingbird?” or whatever it was. When it was The Great Escape – no matter where it was in the movie – it only took a few seconds. And there was no question necessary… 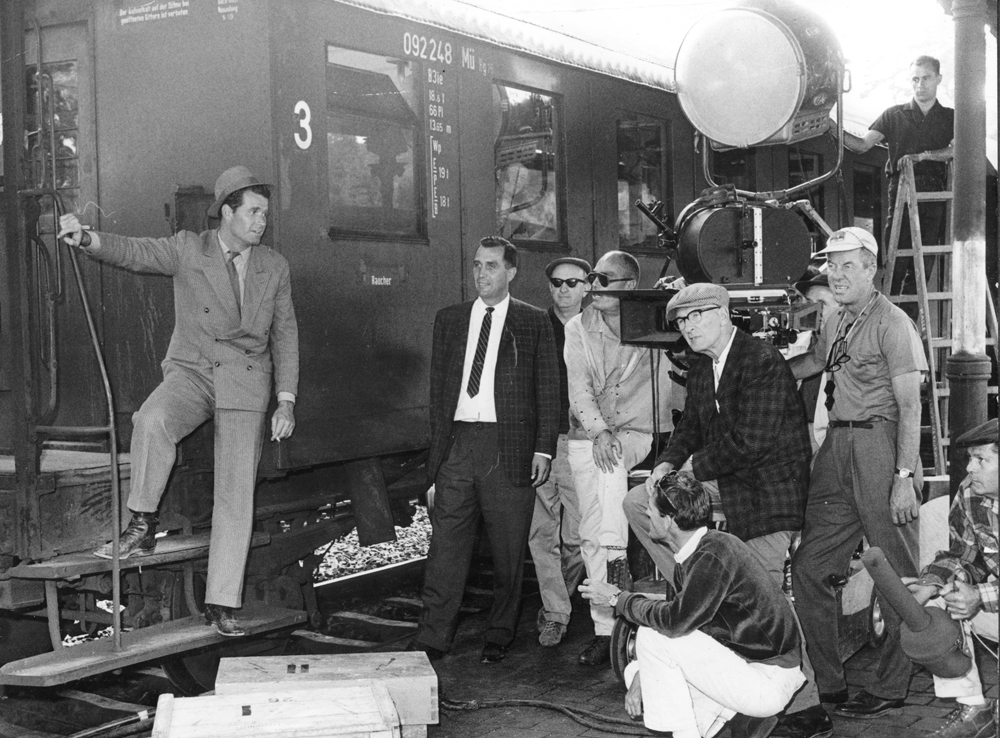 Wally Floody (in the centre, with the tie) served as the technical advisor for the movie.
Brian Floody had some amazing pictures in an album from that time. This is my favorite. 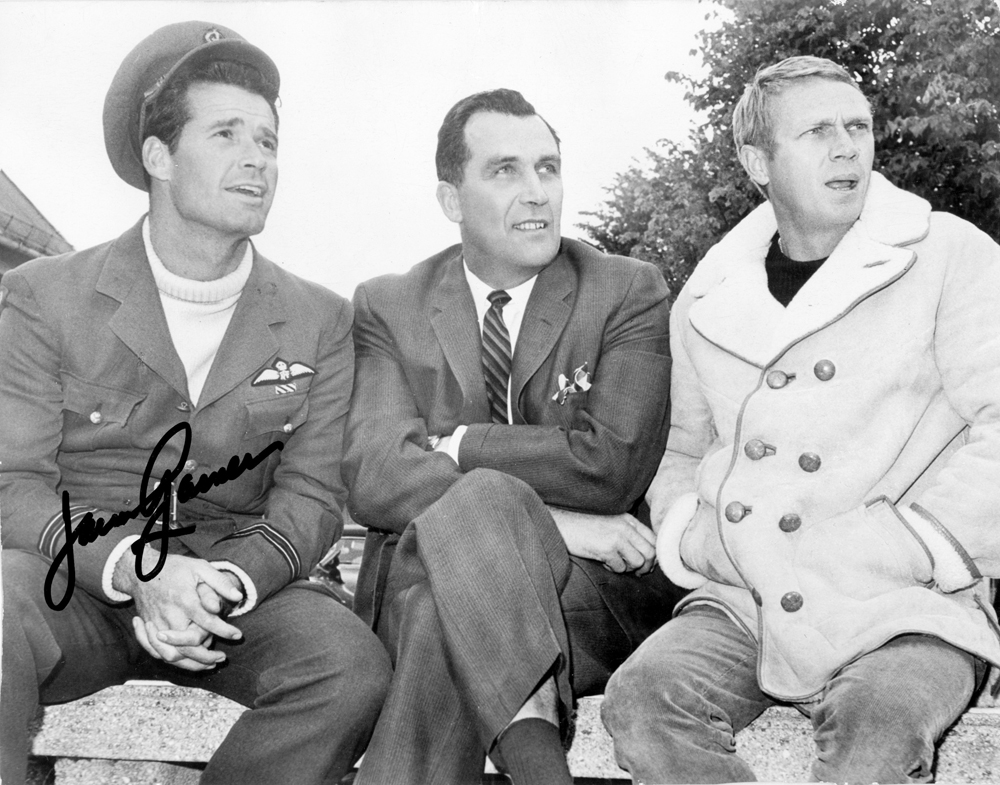 Wally with the film’s biggest stars, James Garner and Steve McQueen.
Betty was much more taken with Garner, who signed the photo. 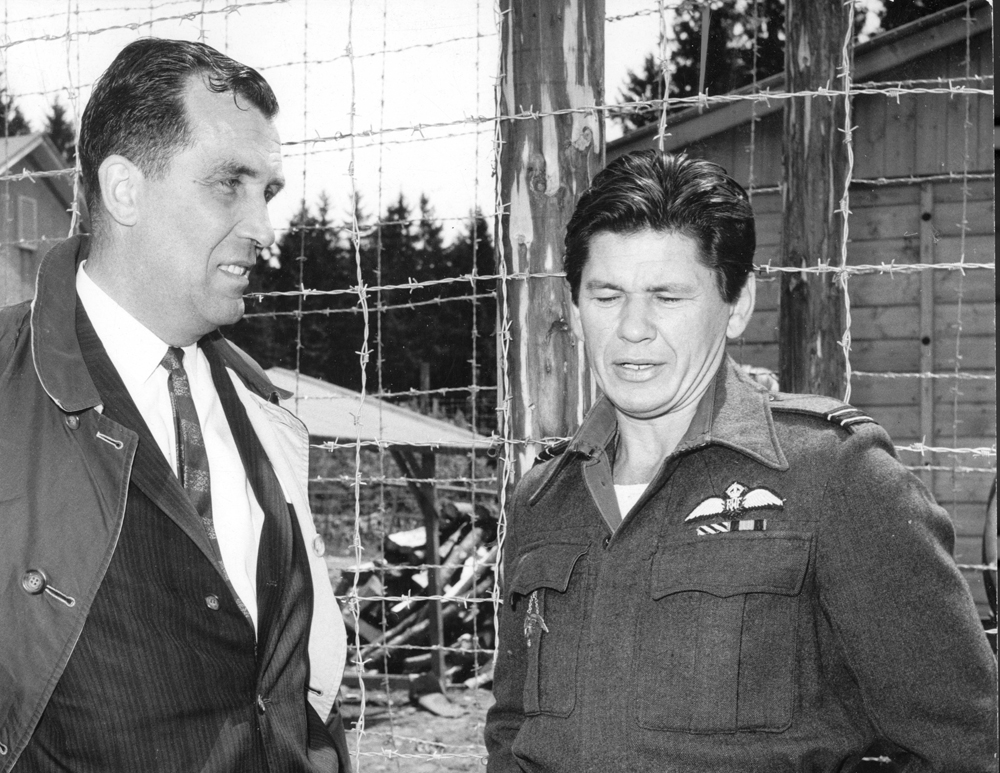 Wally with Charles Bronson, who played Danny “The Tunnel King.”

26 thoughts on “Barbara, Wally and The Great Escape”