Generally speaking, I find the recent trend of athletes signing one-day contracts so that they can retire with their former team to be kind of dopey. That said, I think that Daniel Alfredsson, the Senators, and Ottawa hockey fans did a real nice job of it last week. Roy MacGregor wrote a fine column about it in the Globe and Mail on Friday.

I’ve enjoyed MacGregor’s writing for a long time, particularly when the topic is hockey or life at the cottage. He and I have met a few times over the years, and exchanged emails on occasion, and he’s always been great to talk to. So, I sent him a note telling him how much I liked his Alfredsson story … but pointing out one historical error. 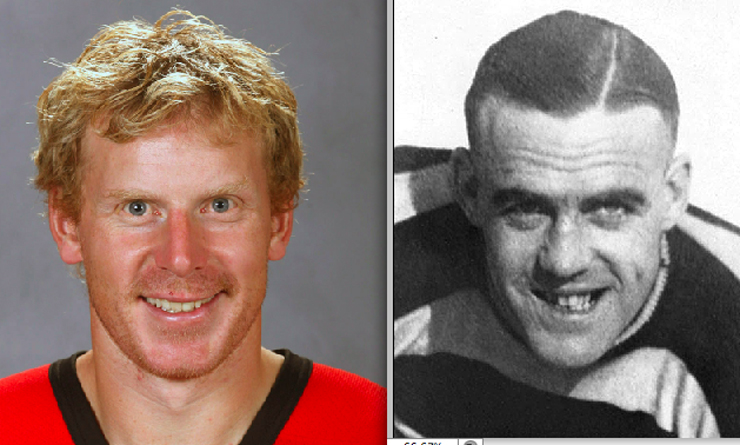 MacGregor had touched on a few of the greatest names in Ottawa’s long hockey history and briefly mentioned King Clancy playing every position including goalie during one Stanley Cup game. I told him that, “it’s in such high circulation these days that everyone believes it’s true, but the evidence is that while King Clancy played every position on the ice during the 1923 Stanley Cup playoffs, he did NOT do so in one single game.”

Roy apologized, and told me that he’d gotten the information from the Hockey Hall of Fame’s web site. “Certainly nothing to apologize about,” I wrote back. “I’m sure you’d find the Clancy story on MANY different web site … and my story only in my book!” (that book being Stanley Cup: 120 Years of Hockey Supremacy.) I added, “It’s like the line from The Man Who Shot Liberty Valance … ‘When the legend becomes fact, print the legend.’ But then there’s always some lonely voice like mine, trying to sort out the facts…” He said that those lonely voices, “matter a great deal to the game and its history.”

For those who care to know what probably happened all the way back in 1923 (and who probably haven’t committed to memory every word in my G I A N T Stanley Cup opus), here’s what I wrote about King Clancy playing all six positions: 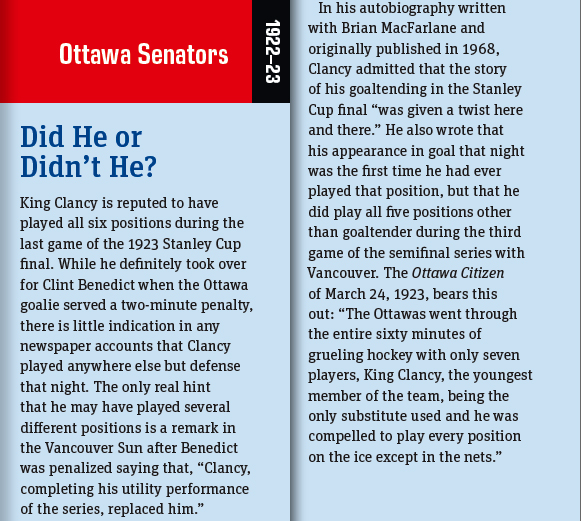 But, sadly, nothing is straightforward with this story. Hoping to fine a little more proof, I did some more digging this weekend. Turns out, Basil O’Meara, writing in the Ottawa Journal on April 2, 1923 after the final Stanley Cup game on March 31 had this to say: “Frank Clancy made hockey history,” and proceeds to write that, “the kid with the tousled thatch went in and played goal and tried his hand at every other position on the team.” Still, the game report on the previous page in that day’s Journal only seems to describe Clancy and Lionel Hitchman subbing in on defense, with Harry Helman taking a few turns relieving the forwards. (Maybe O’Meara’s copy editor back in Ottawa transcribed something incorrectly in type-setting the telegraphed story from Vancouver?) The Vancouver World says nothing about it.

So, I still think I’m probably right in what I wrote … but I’m not quite as sure as I once was!

6 thoughts on “Hockey Nerd in Canada – Part I”