A couple of years ago, we received a copy of an old letter in the offices of the NHL Official Guide & Record Book. It was a letter that referee Lou Marsh wrote to league president Frank Calder detailing events of a game played in Ottawa on February 1, 1922. (Some of you reading this will have seen that letter, and no doubt remember it!) 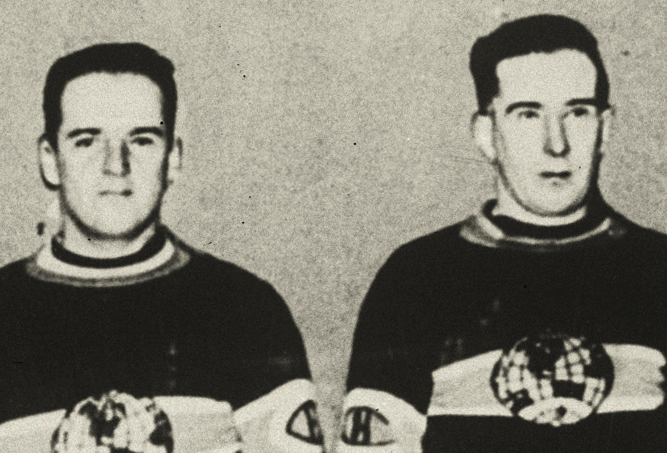 Sprague Cleghorn (on the right) and his brother Odie (left) – but particularly Sprague – were talented but dirty players. They seemed to go out of their way to injure Ottawa players that night. (Sprague was a former Senators star playing in his first season with the Montreal Canadiens.) Marsh wrote of the injuries they inflicted, but also of the profane language Sprague used.

It’s sometimes difficult to think of people we only know from black and white photos, and from the literature of the times, ever uttering swear words. When HBO airs a program like Boardwalk Empire it’s easy to think the sex, violence, and swearing is exaggerated to appeal to modern audiences. But no.

Since children may read this, I’ll only hint at the worst language Marsh describes in his letter. About the tamest thing he says Cleghorn called him is, “a goddamn robber.” He also accused Marsh’s mother of being a female dog, and – most surprisingly! – there was repeated usage of the word that fans of the movie Bull Durham will recall got Kevin Costner’s Crash Davis character ejected from a game. (That was definitely not a word I’d have expected to hear in 1922!)

I don’t have a copy of the letter with me, so I might have the details of this part slightly wrong, but I believe Marsh noted that all of this foul language was used in close proximity to women in the crowd that night, and to a box where the Governor-General and a party from Rideau Hall were seated.

Just the other day, I came across this story of an Ottawa priest condemning so much use of profanity in public places. Interestingly, it appeared in the Ottawa Journal on January 16, 1922, a short time before Cleghorn’s spree. In addition to what you can see here, Father Fitzgerald went on to declare that:

Profanity was particularly noticeable at hockey matches, among players as well as spectators. Players who could not take part in games without swearing should withdraw from sport.

So it would seem that Sprague Cleghorn likely wasn’t alone with his blue lines on the ice.