It’s easy to be cynical about politicians and sports. After all, cheering for the home team is an easy way for them to try and show they’ve got the common touch. But some times, it’s for real.

Pierre Trudeau once joked that: “Canada is a country whose main exports are hockey players and cold fronts.” He was front and center at the opening of the 1972 Summit Series, and weighed in with his belief that Bobby Hull should have been on the team despite his jumping to the WHA. Trudeau may have been using the series for politcal gain, but Brian Mulroney could often be seen in seats just behind the Canadiens bench at the Montreal Forum long before he ever became Prime Minister. Well before that, Lester Pearson played hockey in England and Europe while he was a student at the University of Oxford in the 1920s. Later, he worked for the NHL Players Association in 1970.

In the acknowledgments to his book A Great Game, Stephen Harper writes that his love of hockey history developed as a way to compensate for the fact he wasn’t much of a player. If you ever get the chance to speak to him about hockey, you’ll find a very different man from the one you see on the news.

This coming weekend marks the 200th birthday of Canada’s first Prime Minister, Sir John A. MacDonald. Other than the fact that Lord Stanley of Preston began his term as Governor-General while MacDonald was Prime Minister, there aren’t many real connections between John A. and hockey … but his son, Hugh John MacDonald, had a fairly significant one.

Hugh John MacDonald was born in 1850 but when his mother died in 1857 after many years of failing health, he was raised mainly by his father’s sister and her husband. Hugh John graduated from the University of Toronto in 1869, and was called to the bar as a lawyer in 1872. After the death of his first wife, he moved to Winnipeg in 1882, were he somewhat reluctantly entered politics. Hugh John was elected to the House of Commons in 1891 during his father’s last election campaign (John A. would die later that year) and later served as a cabinet minister under Sir Charles Tupper in 1896. He became leader of the Manitoba Conservative Party in 1897 and was briefly the Premier in 1899 before resigning to take on popular Liberal cabinet minister Clifford Sifton in the 1900 Federal Election. MacDonald lost, and returned to his law practice, though he remained active on the Manitoba and Winnipeg political scene.

By the mid 1890s, Hugh John MacDonald was a patron of the Winnipeg Victorias, the greatest hockey team in Western Canada. (He was also involved with cricket in Winnipeg.) When the Winnipeg Victorias defeated the Montreal Victorias to win the Stanley Cup for the first time on February 14, 1896, Hugh John was among the large group of Winnipeggers that met the team’s train to welcome them home ten days later. He took part in the very first Stanley Cup parade and made a short speech at a civic reception held at the Manitoba hotel. Afterwards, Hugh John was among those who filled the Stanley Cup with champagne and drank toasts from it. 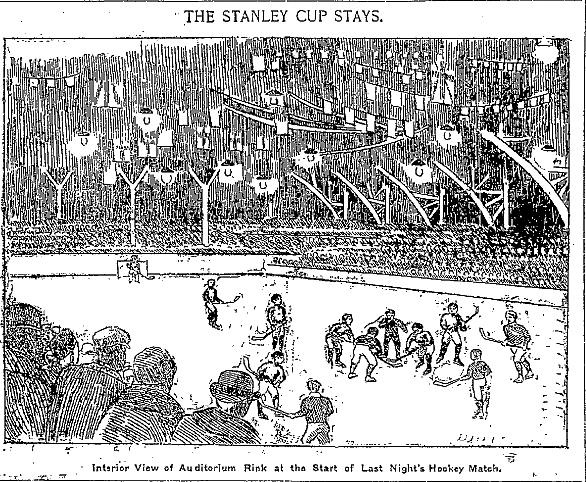 In this early era of hockey history, the Stanley Cup was a challenge trophy, and the Victorias’ reign as champions proved short-lived. Before the next season even got under way, the Montreal Victorias travelled to Winnipeg for a rematch. The sudden death playoff on December 30, 1896, was a thriller, with the Montreal Vics scoring a late goal to defeat the Winnipeg Vics 6-5. At a dinner held for both teams after the game, the duty of officially congratulating the new champions and presenting the Stanley Cup to Montreal captain Mike Grant fell upon Hugh John MacDonald. 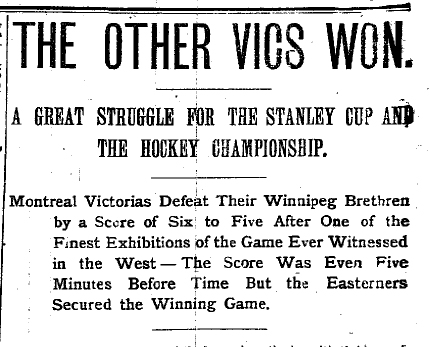 After a couple of unsuccessful attempts, the Winnipeg Victorias won the Stanley Cup again on January 31, 1901, when their captain and biggest star, Dan Bain, scored the first overtime goal in Stanley Cup history to cap a sweep of a best-of-three series with a 2-1 victory over the Montreal Shamrocks in game two. In the civic reception at the Claredon hotel upon the team’s return to Winnipeg on February 11, Hugh John MacDonald once again gave a speech. This excerpt from it is both typical of the time it was made, and a classic example of the hold hockey has had on Canadians for well over 100 years:

“As patron of the hockey club it is my duty to express to you my pleasure at your return from the east and to congratulate you on the victory you have won. The English language, copious as it is, is not sufficient so to enable me to express the warmth of the welcome we wish to extend to you. This may seem to you an exaggeration, but I can assure you that if you had been in Winnipeg and seen the intense eagerness with which every word [telegraphed live from rink side in Montreal] was seized upon – an interest so intense that it became painful at times, and if you had heard the shout of triumph when the news was flashed across the wire that the winning goal had been scored by our own Dan Bain, you would have realized to some extent at least that I am keeping quite within the mark when I speak of the warmth which the [citizens of Winnipeg] wish to extend you.

Hugh John MacDonald had one last chance to speak at a Stanley Cup victory banquet when the Winnipeg Victorias defeated the Toronto Wellingtons in January of 1902, but he appears to have been too busy with provincial government affairs to be on hand when the Victoria lost the Stanley Cup to the Montreal AAA that March.