Tampa Bay’s Ben Bishop has already beaten Carey Price and Henrik Lundqvist in the playoffs. If the Lightning win the Stanley Cup – which Price’s Canadiens and Lundqvist’s Rangers have yet to do – is Bishop a better goalie than they are? If Chicago’s Corey Crawford winds up winning his second Cup, is he a better goalie?

Few people are going to say yes. After all, even the greatest goalie can’t win all by himself. But having a good goalie certainly doesn’t hurt.

Way back in 1917, when the NHL was starting out as a four-team circuit, hockey experts already knew that a top team needed a top goalie. The Montreal Canadiens had Georges Vezina. The Ottawa Senators had Clint Benedict. Both were future Hall of Famers, and could certainly be considered the Carey Price and Henrik Lundqvist of their day (though both had already won the Stanley Cup by then). Even the Montreal Wanderers, whose owner Sammy Lichtenhein and coach Art Ross were publicly bemoaning the plight of their undermanned team, had Bert Lindsay in goal. Lindsay – the father of Red Wings legend Ted Lindsay – was no superstar, but a solid goaltender in his own right. (Let’s say he was Corey Crawford – though without a Stanley Cup win.)

Who did Toronto have in net entering the 1917–18 season? The tandem of Art Brooks and Sammy Hebert. Their modern equivalents might be the two worst starting goaltenders in the American Hockey League. 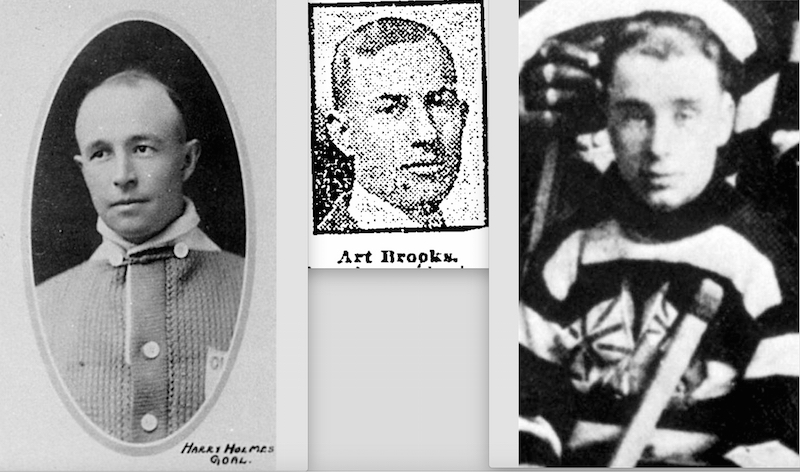 On the first night in NHL history, December 19, 1917, Hebert gave up five goals in the first period in Toronto’s game against the Wanderers. Hebert was replaced by Brooks, who gave up five more through the next two periods. The Wanderers won 10-9. Offense ruled in this era, and NHL teams would average close to five goals a game during the 1917-18 season. Even so, TORONTOS WEAK IN THE NETS read a headline in the next day’s Toronto Star. On December 21, the Ottawa Journal noted: “one swallow does not make a souse, and one game doesn’t afford much of an indication as to the future possibilities of a [season] but … it seems safe to hazard the following…. Toronto needs more balance on the attack, and a netminder of class.”

Toronto looked much better in its home opener on December 22, crushing Benedict and the Senators 11-4. Four nights later, Toronto beat Vezina and the Canadiens 7-5. “Brooks, in goal,” the Star reported, “looked like Mr. Stopper from Stopperville.” The writer appears to have been serious, but then the team dropped its next game 9-2 to the Canadiens in Montreal on December 29. The Toronto World said the “Torontos are still suffering from the want of a goal-tender.”

Toronto made a change in net in Ottawa on January 2, 1918 and won 6-5. The World reported that “both Sammy Hebert and Clint Benedict [played] remarkable games,” but by now newspapers had been reporting for weeks that Toronto was after Harry “Hap” Holmes – another future Hall-of-Fame goaltender. (If Vezina and Benedict were Price and Lundqvist, perhaps Holmes, with his two Stanley Cup wins, was Jonathan Quick.)

Hap Holmes was from the Toronto area, born in Aurora, Ontario, in 1892 and raised in Clarksburg – between Collingwood and Owen Sound – but living in Parkdale since at least 1911. He’d won the Stanley Cup with the Blue Shirts of the National Hockey Association in 1914, but was one of several Toronto players lured to the Pacific Coast in 1915 – where he won the Stanley Cup again with the Seattle Metropolitans in 1917. Now, Hap had a chance to play at home again … but the Wanderers (for reasons that seem somewhat dubious) owned his NHL rights.

Toronto was reluctant to meet Sammy Lichtenhein’s asking price of Reg Noble (the team’s best player), but then fate intervened. A fire destroyed the Montreal Arena, and while the Canadiens moved across town to the Jubilee Rink, the woeful Wanderers dropped out of the NHL, leaving the league with just three teams. “The blue shirts will get Harry Holmes,” the World reported on January 4, “and will be strengthened in their only weak spot.” The following day, the paper opined that with Holmes in net, “the blue shirts will be a hard team to beat.”

The Montreal Canadiens won the first half of the NHL’s split-season schedule, but Toronto won the second half and then defeated Montreal in the playoffs. Next, they beat the Vancouver Millionaires of the Pacific Coast Hockey Association three games to two in a best-of-five Stanley Cup series. It was a high-scoring affair until Toronto won the last game 2-1 in a tight goaltending battle between Holmes and Hugh Lehman – another future Hall of Famer. (Roberto Luongo, maybe … but with a Stanley Cup ring!)

Said the Vancouver World after the series: “Too much praise cannot be paid to Harry Holmes for his exhibition in the nets. Harry has his eye on everything and he made many startling saves.… His net guarding was one of the strongest points of the Toronto defence, and it certainly went more than half way in winning the honors.”

When it mattered most to his team, Hap Holmes was Mr. Stopper from Stopperville. Who will it be this year?

2 thoughts on “Mr. Stopper from Stopperville”