A week from today will mark the 25th anniversary of the first (and so far only) no-hitter in Blue Jays history. Dave Stieb blanked the Indians for a 3-0 victory in Cleveland on September 2, 1990. Sportsnet marks the anniversary this Sunday with Dave Stieb: Almost Perfect. I’m sure it will be good, as all their special features have been.

As anyone who knows Blue Jays history is aware, Stieb had a reputation for being prickly. In the early days, when he was so much better than most of the players around him, he often glared at teammates who made errors when he was on the mound. You still hear stories that the rest of the Jays never liked him much. I must say, though, for whatever it’s worth, he was always perfectly nice to me when I was on the ground crew.

For example, my brother Jonathan had a girlfriend he wanted to impress by getting Stieb’s autograph. When I asked him if he’d sign a piece of paper for her, and he said, “don’t you think she’d like a baseball better?” He signed a ball for her, and also gave me an autographed picture. I gave the ball to Jonathan to give to the girl. I kept the picture (which I still have!) for myself. 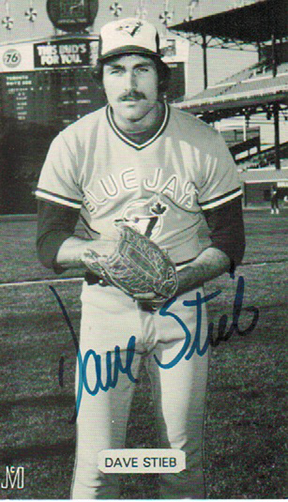 As anyone who knows Blue Jays history is also aware, Stieb had several heart-breaking near-misses en route to finally throwing his no-hitter. The first of those came 30 years ago this week, on August 24, 1985. Facing 300-game winner Tom Seaver of the White Sox in Chicago, Stieb had a no-hitter through eight innings. He’d walked three, and only two runners had gotten as far as second base, but on the first pitch in the bottom of the ninth, Rudy Law took Stieb deep. No-hitter gone. Shutout too. Three pitches later, Bryan Little hit another home run.

Pitch counts were never reported in those days, so it’s unclear how many pitches Stieb had thrown. He told reporters his arm had begun to tighten up and that manager Bobby Cox might not have sent him out for the ninth if not for the no-hitter. Now, Cox turned to Gary Lavelle … who promptly gave up a home run to Harold Baines. After finally recording the first out, Lavelle surrendered a single to Carlton Fisk. The near-blowout was in danger of getting away, bringing Cox back to the mound.

Since the Blue Jays had started to contend in 1983 the bullpen had aways been a weakness. Now, finally, Toronto had someone to turn to when the game got tight. Only it wasn’t the person we’d all expected when the 1985 season began.

I remember exactly where I was when I heard that the Blue Jays had acquired Bill Caudill from Oakland at the Winter Meetings in December of 1984. (The deal cost Toronto Dave Collins – a player I liked a lot – and Alfredo Griffin – whom everybody liked, but, paraphrasing Sports Illustrated, “who was Alfredo Griffin to keep Tony Fernandez in the minors?” … and, by the way, when the Blue Jays first called up Fernandez in September of 1983, I was sent to the airport to pick him up! He gave me a bat as a souvenir.) 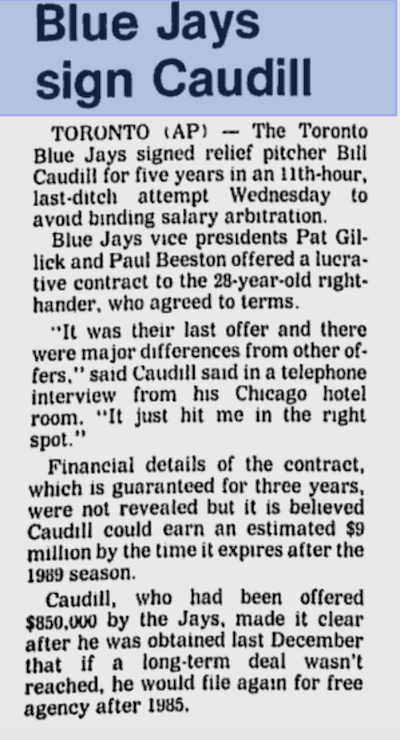 Caudill’s contract was expiring when the Blue Jays acquired him, and I also remember exactly where I was in February of 1985 when I heard they’d avoided going to arbitration with him. I was thrilled. Locking up Caudill was the move that was going to put us over the top, but it went bad right from the start.

Caudill struggled in spring training, and then pitched poorly (despite picking up a pair of wins) when Toronto opened the season in Kansas City. A few days later in Baltimore, the Blue Jays were leading the Orioles 7-3 in the bottom of the eighth when Caudill entered the game with two on and nobody out. (Remember when teams used their relief aces that way?) He promptly issued a walk to load the bases, gave up a run-scoring ground out, a single to make it 7-5 … and then a monster three-run homer to Eddie Murray. Jim Acker got out of the inning, but the Blue Jays lost 8-7.

“I’m no superman,” Caudill would say as his struggles continued … but fortunately, the Blue Jays had Clark Kent waiting in reserve! 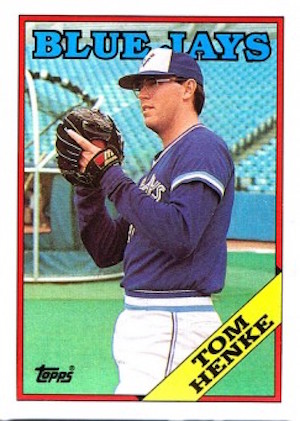 I most decidedly do not remember where I was when the Blue Jays claimed Tom Henke from the Texas Rangers in January of 1985 as compensation for losing Cliff Johnson to free agency. But as Caudill struggled, I do remember the reports on Henke in the press notes I would read in the photographers dugout where we on the ground crew watched the games. The late-blooming 27-year-old bricklayer from Taos, Missouri was putting up stunning numbers in Syracuse. By the time he got to Toronto on July 28, Henke’s Triple-A numbers read: 51.1 innings, 13 hits, 18 walks and 60 strikeouts. He had a 2-1 record with 18 saves and had surrendered only five runs (all of them earned) for an ERA of 0.88.

Henke got a nerve-wracking win in a 4-3, 10-inning victory in Baltimore in his Blue Jays debut on July 29, 1985. He picked up a more efficient win two days later. His first save came at home versus Texas on August 2. Bill Caudill earned a sloppy save the following night, but it was the last one he got in 1985. Tom Henke ruled the back of the bullpen now, and it turned the franchise around. Henke got the final two outs to save Stieb’s near no-hitter 30 years ago this week, and kept on racking up saves until the Blue Jays were World Series champions in 1992.

4 thoughts on “Stieb and Henke”