Let’s face it. As Canadians, we so often like to feel ourselves superior to Americans when they get caught up in their latest national drama. But we also crave their approval when things are going well for us … such as with a certain baseball team!

In the Toronto Star last Sunday, Raju Mudhar, in his Sports Media column, brought up the issue of Bob Costas raising the ire of Toronto fans back in the 1989 playoff series against Oakland when he commented that: “Elvis has a better chance of coming back than the Jays.” Scott Moore, president of Sportnet, said, “when you get a [U.S.] network guy who is not as biased towards the Jays, people think they’re biased against them… Costas didn’t hate Toronto. He wasn’t a home-team broadcaster that our viewers are used to.”

Personally, I remember on the field during the afternoon before the 1985 Championship Series with the Royals got under way, Costas proudly speaking of how he planned to stick up for Canada. How? By mentioning that despite the cool weather in Toronto that night, there was already snow in Denver – which people at the time were touting as an obvious expansion site. Um, thanks … I guess.

I also remember how, the next day, at least one Blue Jay (it’s been 30 years, but I think it was Buck Martinez, who missed the end of the season and the playoffs that year with a broken leg,) was disappointed that Tony Kubek – who had been the analyst on Blue Jays broadcasts since nearly the very beginning – had not been supportive enough of the team in game one in his main job on the NBC broadcast. So it’s not just the fans.

Generally speaking, the U.S. media has gotten behind this year’s Blue Jays. It’s hard not to rally around a team that’s on such a roll. Still, there was that whole “Beer League” business back in August. Anyway, here’s the American view of past Blue Jays division championships in newspaper stories the following day. And here’s hoping there’s another one to add as soon as tomorrow! 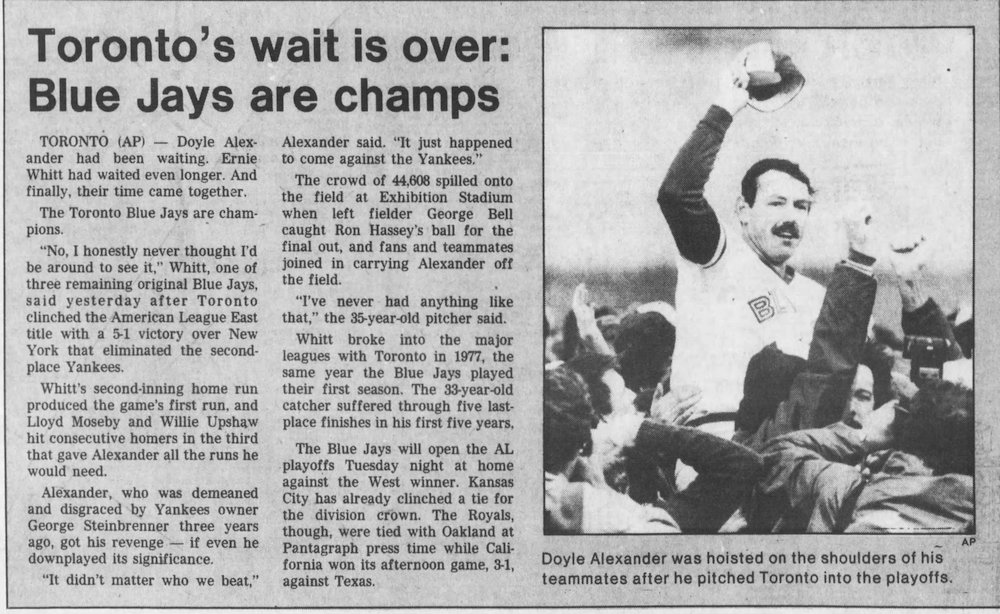 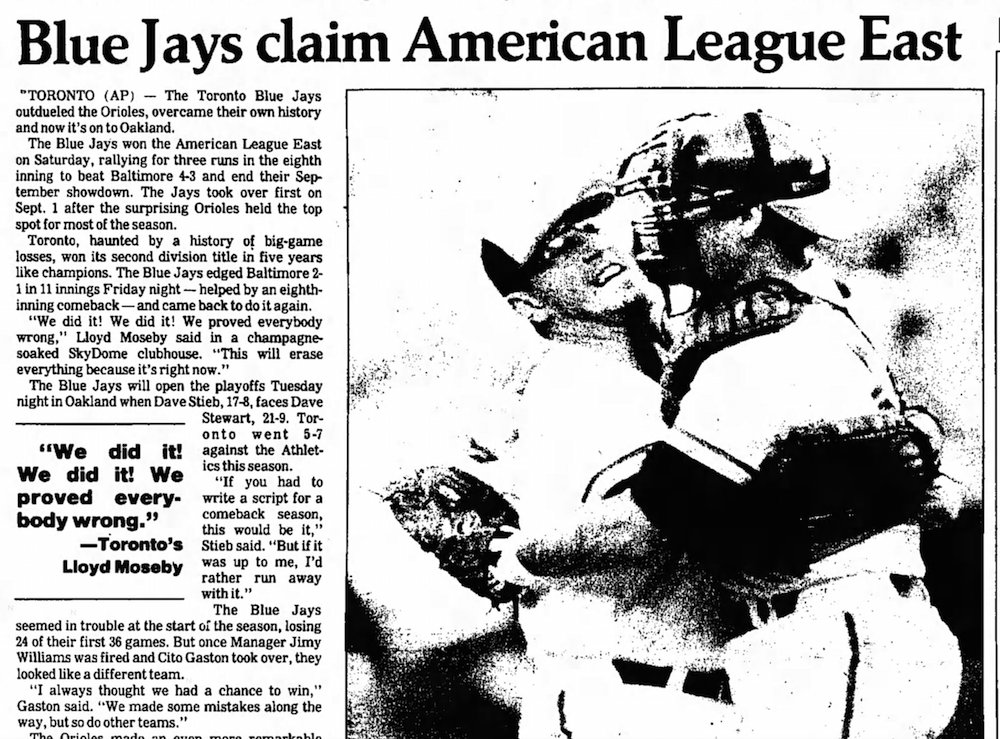 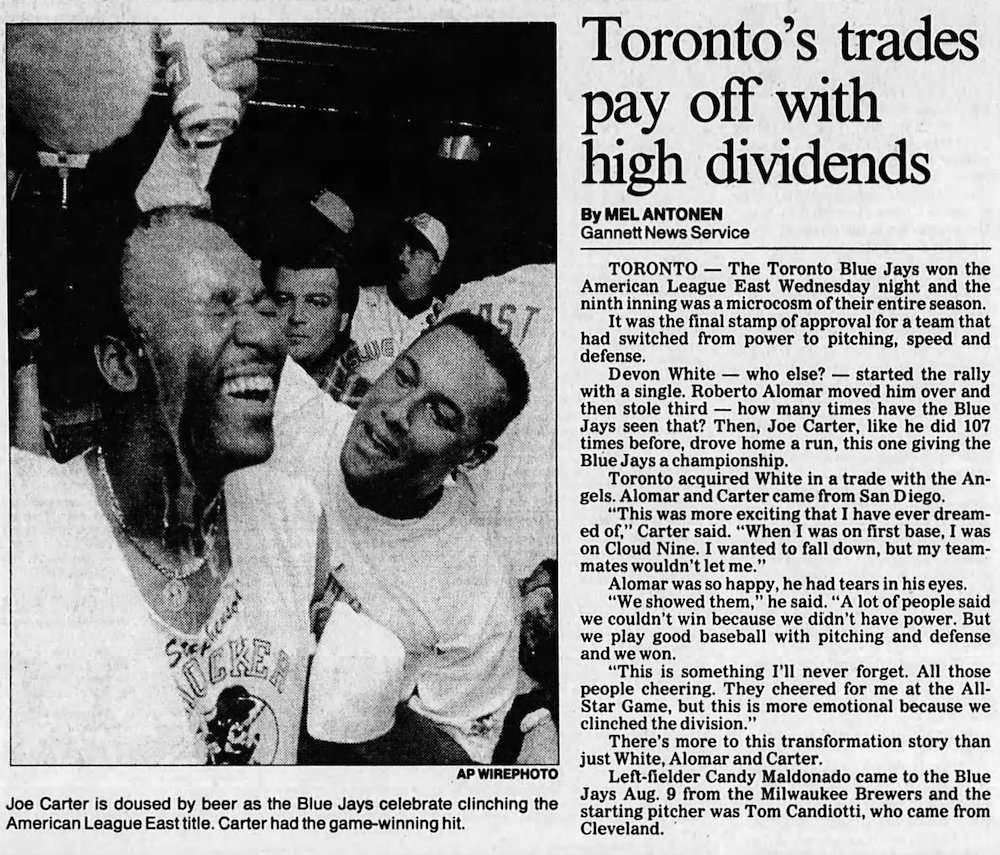 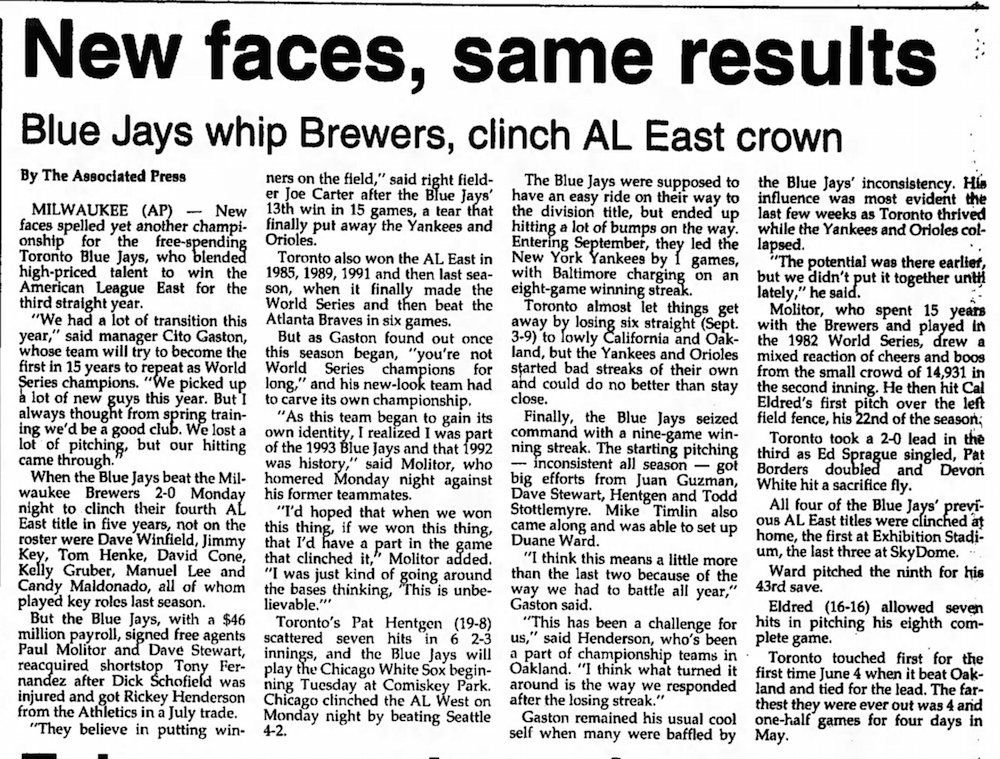