There are all these talking heads on sports television these days (radio too) telling us the “inside story” on what trades might be in the works. Drives me crazy! Personally, I don’t want people telling me what might happen (but usually doesn’t). I want people giving me analysis when something DOES happen. And, for me, I don’t care who breaks the story. I care about who covers it best.

Admittedly, I don’t exactly have my ear to the ground for these types of things, but for all the talk that he’s been on the block over the past year (and for all those Leaf fans who’ve been wishing they’d trade him for even longer than that), when the nine-player deal that sent Dion Phaneuf to the Senators was announced yesterday, it was amazing to see how fast it got done … and how little had leaked out beforehand. 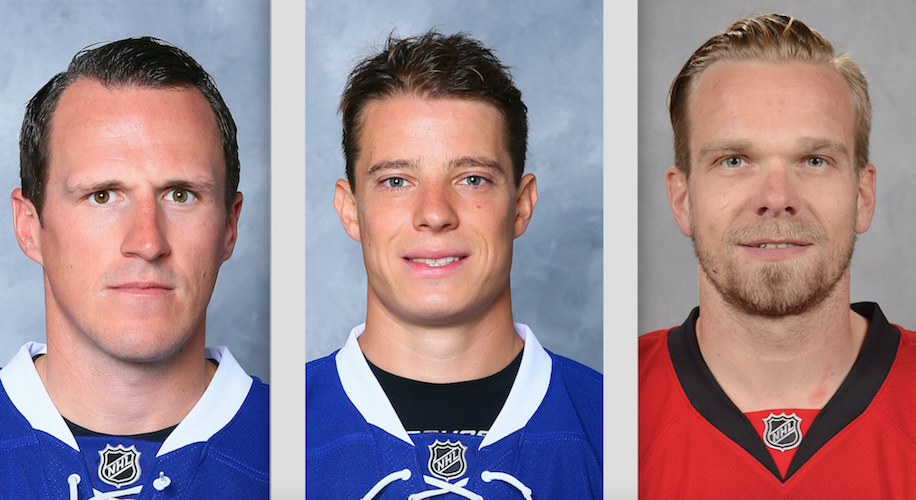 Dion Phaneuf and Matt Frattin are among the Leafs leaving for Ottawa.
Milan Michalek is one of the Senators headed to Toronto.

Nine players, and millions of dollars in salary, were swapped between Toronto and Ottawa. Even accounting for inflation, that’s a lot more money than the deal that was considered the biggest in hockey history when the teams from these same cities were last involved in a major blockbuster. And it’s not likely that this deal will have the same immediate impact on the Maple Leafs as the trade to acquire King Clancy on October 10, 1930 (not October 11, as most sources indicate).

The Ottawa Senators had been the top team of the early 1920s, winning the Stanley Cup in 1920, 1921 and 1923 when the NHL had only four teams and still had to compete with other leagues for the top prize. Even after the NHL expanded to 10 teams in 1926-27 and took over control of the Stanley Cup (for all intents and purposes), the Senators won it again that season. But with six of the league’s teams now in the United States, and Toronto and Montreal both much larger than Ottawa, the Canadian capital was the smallest market in the NHL by far. In order to survive, the Senators began selling off their stars; Cy Denneny to Boston, Hooley Smith and George Boucher to the Montreal Maroons, Frank Nighbor to Toronto.

On August 20, 1930, a headline story on the front page of the Ottawa Journal confirmed that the club was willing to entertain offers for King Clancy and that teams had begun making inquiries about the Senators captain and star defenceman.

Over the next few weeks, rumours poured in:

The Toronto Maple Leafs were silent … until they lost the rights to John Gallagher, a former star junior defenceman Toronto believed they had signed. Trouble was, the Montreal Maroons also believed they’d signed Gallagher, and in late September the NHL sided with them. Writing in the Toronto Star about a month after the Gallagher decision, Charlie Querrie noted:

“Kidding Conny Smythe one day about the result of the Gallagher case and remarking that Montreal generally had the edge in league affairs, the little leader of the Leafs asked me how I would like to see Frank (King) Clancy with the local squad. I looked at him and started to laugh, but when he said he was going east, and remembering ‘Rare Jewel’ [a horse Smythe owned that had recently come in as a long shot and is said to have earned him about $15,000], I began to wonder if he would put it over.” 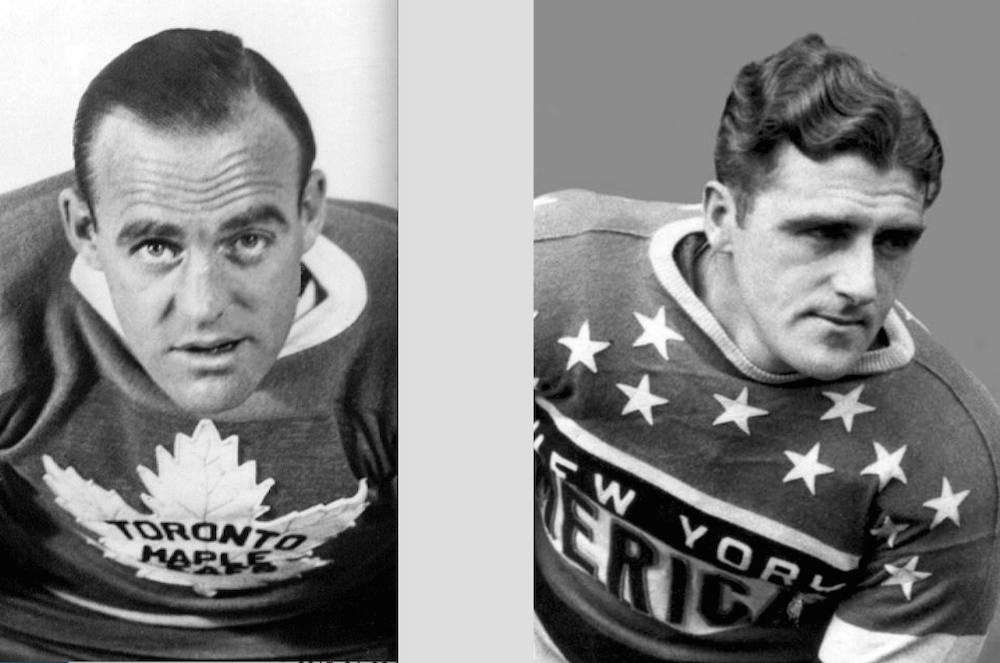 King Clancy and John Gallagher.
(Photos obtained from the web site of the Society for International Hockey Research.)

Indeed, Conn Smythe left Toronto for Ottawa about October 5, announcing (as The Globe reported on October 7) that he would return with Johnny Gallagher in his possession, “or some better player.” A similar report appeared in the Ottawa Journal that same day under a headline atop the sports page stating: SMYTHE WANTS CLANCY.

A day later, the Globe, the Journal and the Toronto Star (undoubtedly other papers too) announced that Toronto had been given an option on the Ottawa captain. The Star also noted on its front page on October 8 that Smythe had announced the directors of the Toronto Maple Leafs would be asking the fans for their opinion on whether or not King Clancy was worth a price of $35,000 plus two players.

This ad appeared in Toronto’s Globe newspaper on October 9, 1930.

On the evening of Friday, October 10, 1930, the following press release was issued:

The directors of the Toronto Maple Leaf Hockey Club unanimously resolve to exercise their option on player ‘King’ Clancy with Ottawa. The directorate also appreciate the tremendous enthusiasm and support displayed by the fans of Toronto and all Ontario in this matter.

The Toronto Star reported on some of the many letters the Maple Leafs had received:

“Clancy will be another Rare Jewel…”

“Buy Clancy, don’t let the Maroons get him…”

“See Smythe for Sand, get Clancy if it cost forty grand…”

“Clancy and the Stanley Cup, some bargain, leave the kid forward line alone, and Day…”

“Oh, Clancy, Clancy, you are the man I fancy, if [Conn] Smythe doesn’t get you, he’ll kick himself in the pantsie…”

The Maple Leafs gave up Art Smith, Eric Pettinger and $35,000 for King Clancy. They made the playoffs in 1930-31 for just the second time in six seasons. A year later, they opened Maple Leaf Gardens and won the Stanley Cup. Soon, with Foster Hewitt broadcasting their games from coast to coast in Canada, the Toronto Maple Leafs were a national institution.

4 thoughts on “How the Deal Got Done”