Today is Valentine’s Day, but it also marks two important Toronto hockey anniversaries. Ninety years ago, on February 14, 1927, the group assembled by Conn Smythe made its first $75,000 payment (they’d already put down a $10,000 deposit and would pay the final $75,000 over the next 30 days) to purchase the Toronto St. Pats. The deal was ratified that day at a meeting of NHL officials at Toronto’s King Edward Hotel. The team played its final game under its old name at Detroit the following evening before making its debut as the Maple Leafs at home against the New York Americans on February 17, 1927.

Today also marks the anniversary of the Ace Bailey benefit game; the first All-Star Game in NHL history, played at Maple Leaf Gardens in Toronto 83 years ago on February 14, 1934. Recently, I wrote about some of the back story behind the Howie Morenz Memorial in 1937. Today, here are some of the behind-the-scenes discussions that led to the Ace Bailey Game.

I’m sure that many of you reading this will be familiar with the basic story of the Ace Bailey Incident. If not, my friend and colleague Kevin Shea wrote about it recently in the Toronto Star. There’s also an entire chapter devoted to it in my book Art Ross: The Hockey Legend Who Built the Bruins.

Briefly, Bailey was a star for the Toronto Maple Leafs who had his career (and almost his life) ended in a dirty hit from behind by Bruins legend Eddie Shore at the Boston Garden on December 12, 1933. Bailey fell and his head struck the ice. His skull was fractured, and over the next few days there was a blood clot discovered on the left side, and extensive hemorrhaging on the right side, of his brain. His chances of survival were poor, but a series of operations performed by a Boston specialist saved his life. 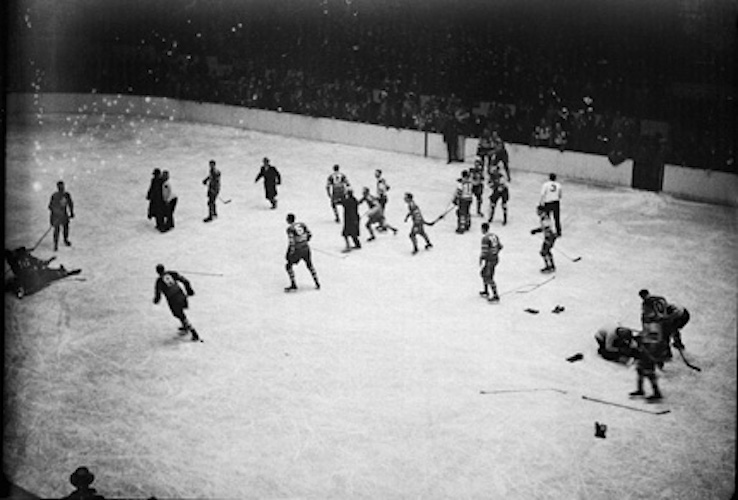 The scene on the ice at the Boston Garden, with Ace Bailey down on the left and Eddie Shore, after being punched by Red Horner, at the right. Photo courtesy of Art Ross III.

For his hit on Bailey, Eddie Shore was suspended for 16 games, which was one-third of the NHL’s 48-game season. Toronto’s Red Horner was suspended for six games for attacking Shore. Today, Shore is considered one of the dirtiest players in hockey history. His reputation as a dictatorial minor league owner – which I touched on in my recent story about Chick Webster – certainly hasn’t helped! But Shore was no goon. In his day, he was considered rough and tough but not violent. As such, Art Ross of the Bruins felt his suspension was too severe. (Boston fell apart without Shore, and Ross claimed his loss cost the team $50,000 in gate receipts, which was a steep price during The Great Depression.)

Conn Smythe – who had stayed at Bailey’s bedside in Boston for several days –  was incensed at losing Horner for any time at all, given that they had already lost the services of Bailey. He also didn’t feel that his Maple Leafs – who’d paid out about $2,500 by early January – should be on the hook for all of Bailey’s medical expenses. The Bruins had already donated the gate receipts from their next home game on December 19 (reported first as $6,642.22 and later as $6741.21) directly to Mrs. Bailey, but the Toronto owner wanted more.

As early as January 4, 1934, Smythe announced that he would ask for a special meeting of the NHL board of governors to discuss the financial angle. “The Toronto Maple Leafs have been penalized enough already,” he declared, “without incurring a further loss of what I figure will amount to $8,000. Who is going to pay the hospital bill, physicians’ fees and all the expenses resulting from Bailey’s injury. We will have to pay the salary of a hockey player who won’t be on the ice for a single minute during the rest of the season. Boston will have Shore back January 28 and besides that we lost Horner for six games. Is there any justice in that?” 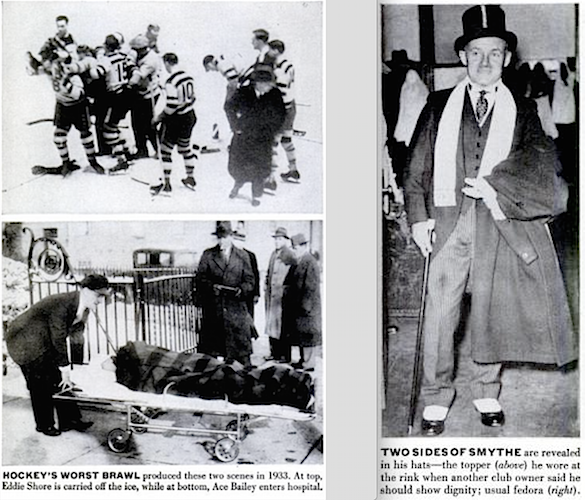 Photos from the pages of Life Magazine in a story about Conn Smythe from 1955.

On January 9, 1934, Smythe, backed by the Ottawa Senators and Montreal Maroons, requested that NHL President Frank Calder call the meeting. It took place at the Lincoln Hotel in New York on January 24. Despite reports that there would be some discussion of extending Shore’s suspension, compensation for Bailey was the only issue. The Boston Globe reported that the meeting lasted three hours. The Toronto Star said five hours. The governors clearly believed Bailey was entitled to something, but seemed worried about setting a precedent that would make teams financially liable for injuries to an opponent.

“The league,” wrote Toronto Star Sports Editor Lou Marsh, “certainly took no chances on establishing a dangerous precedent by making any allowance of league funds to Bailey or accepting any responsibility for injuries to individual players, no matter how they were incurred.”

In the end, it was James Strachan of the Maroons who suggested a benefit All-Star Game, although Ottawa Journal sports editor Walter Gilhooly had already written a similar proposal. The NHL’s announcement was made when the governors broke for lunch at 2 pm. Smythe declared himself satisfied with the action. 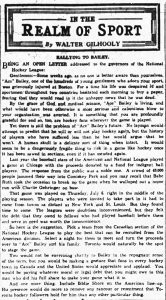 Click the photo above to read Walter Gilhooly’s open letter to the NHL
Governors as it appeared in the Ottawa Journal on January 8, 1934.

“My only idea was to get something for Bailey,” the Leafs boss said. “Yes, he’s all through playing hockey. I decided he ought to get $15,000 and I don’t care much how he gets it…. If we don’t draw enough to make up that amount with the exhibition game the Toronto club will put up the rest. If we have something over we may apply the surplus on his hospital and doctors bills.”

5 thoughts on “The Toronto Maple Leafs and Ace Bailey”