It was big news last week when Sidney Crosby collected his 1,000th career point. He reached the milestone on February 16 with an assist on a Chris Kunitz goal early in the first period, and then picked up another assist on the tying goal in the third period before scoring himself in overtime to give his Pittsburgh Penguins a 4-3 win over the Winnipeg Jets. It was truly a feel-good moment for a player who has clearly re-established himself as the best in the game after the concussions of a few years back that threatened to cut short his career.

Crosby is the 86th player in NHL history to record 1,000 points. (Henrik Sedin and Alex Ovechkin hit the mark earlier this year, and Daniel Sedin and Shane Doan are closing in too.) The first was Gordie Howe, who reached the milestone more than 56 years ago on November 27, 1960. Coverage of that moment was widespread too – although the focus of those stories may surprise you. 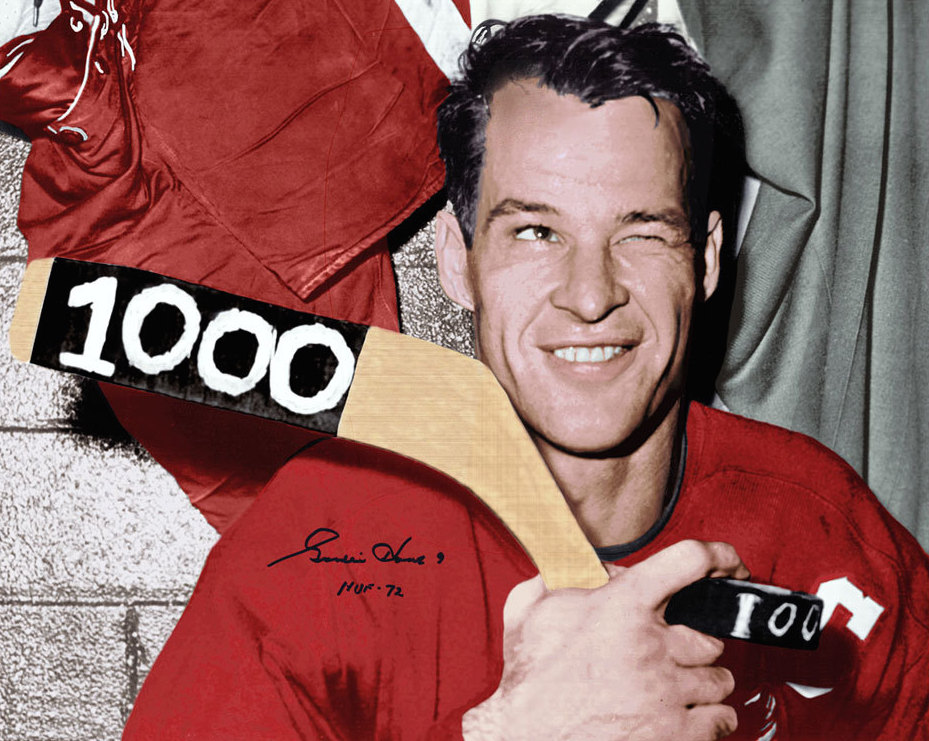 Howe reached the milestone with the first of two assists that night in Detroit’s 2-0 home victory over Toronto. It was a Sunday, and Howe had also picked up an assist in the Red Wings’ 3-3 tie at Maple Leaf Gardens on Saturday night. With so few Sunday newspapers in this era, Monday papers had to cover the full weekend’s worth of games, and in Canada, most of the sports pages were filled with Ottawa’s 16-6 Grey Cup victory over Edmonton in Vancouver that Saturday. (The Grey Cup didn’t move to Sunday until 1969.)

The Montreal Gazette devoted the first four pages of its sports section to Grey Cup coverage on November 28, 1960:

And when it finally got around to Sunday’s hockey games outside of Montreal, it made no mention at all of Howe’s 1,000th point. Instead, it focused on his tying for the all-time scoring lead with Maurice Richard, who’d recently retired with 965 regular-season points and 126 more in the playoffs for a total of 1,091. 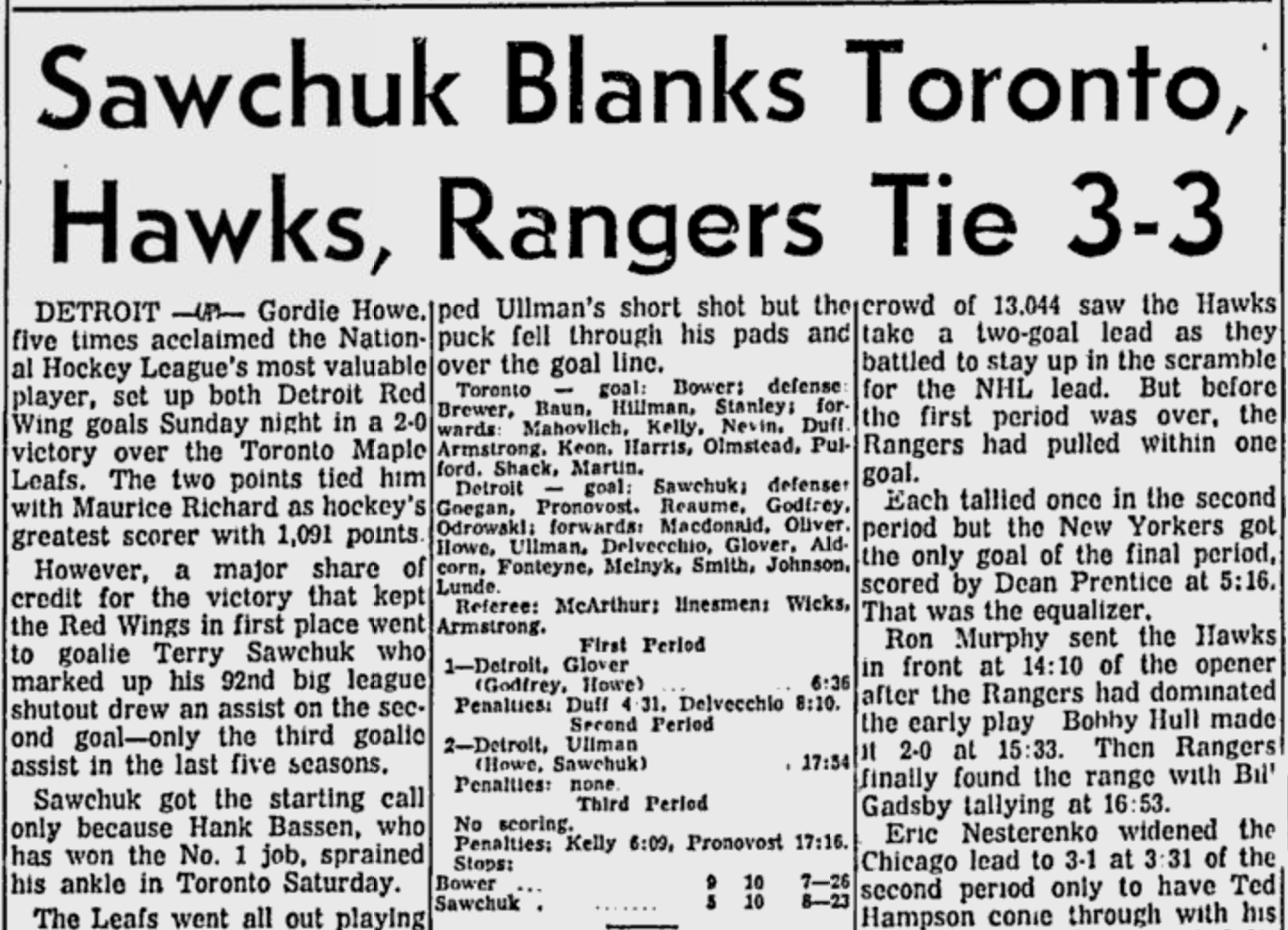 A Montreal bias, perhaps? After all, fans of the Canadiens and Red Wings had been arguing the merits of Howe versus Richard for years. But the coverage in Toronto wasn’t much different. The Star and the Globe at least mentioned that Howe now had 1,001 points in regular season play – although neither said anything about him being the first to reach 1,000 and both mentioned his tie with Richard.

Even in Detroit, the headline in the Free Press said “Howe Ties Record” as did the story picked up from the Canadian Press in the Star-Phoenix in Gordie’s home town of Saskatoon.

Only the United Press International, it seems, played up the fact that Howe’s first assist in the 2-0 win over Toronto made him the first player to reach the 1,000-point plateau. But even they gave pretty much equal billing to his tying Richard at 1,091.

Howe, himself, seemed to play down the milestone. As noted in the UPI story, what he really wanted was to be able to play another five seasons to reach 20 for his career. Numerous stories pointed out that he didn’t even take the puck from his 1,000th point as a souvenir, although someone must have because the colourized photo above is all over the Internet, and Detroit GM Jack Adams stated that the Red Wings planned to put the puck on display.

Meantime, Howe quickly moved himself into the undisputed spot as hockey’s all-time scoring leader. Despite a 3-2 loss to Boston at home in Detroit’s next game on December 1, he picked up assists on both Red Wings goals to move two points clear of Maurice Richard with 1,093. 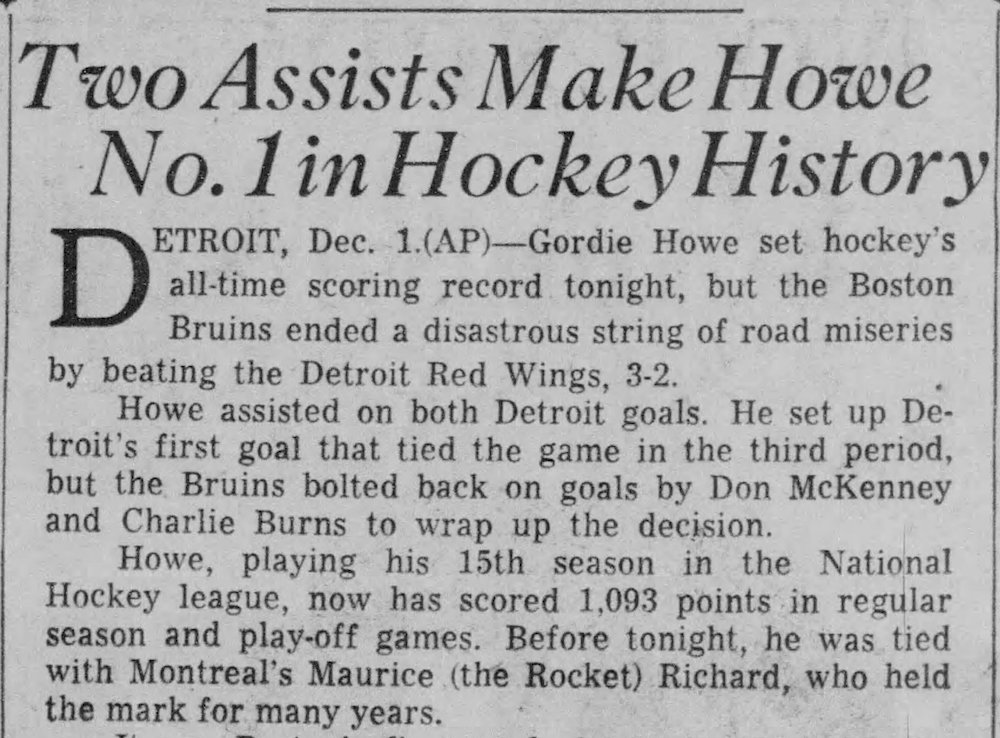 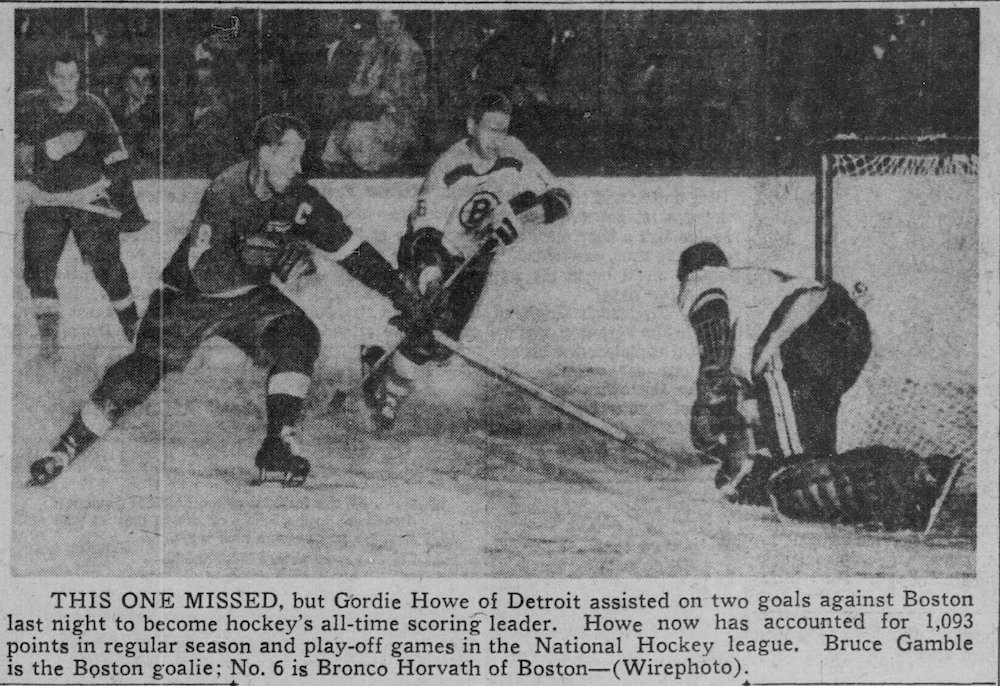 But Maurice Richard continued to loom large in NHL milestones. Even after Gordie Howe became the second player to score 500 goals in 1962 and went on to surpass Richard with 545, sportswriters well into the 1970s would note not just when players reached 500  but when they reached 544 as well. And, of course, 50 goals in 50 games in a single season (which Richard accomplished in 1944-45) would remain a magic mark until Mike Bossy matched it in 1980-81 and Gretzky obliterated it with 50 in 39 the following year.