On April 18, 1942 – 75 years ago today – the Toronto Maple Leafs capped the greatest comeback in sports history. With a 3–1 win over the Detroit Red Wings in Game 7 at Maple Leaf Gardens, Toronto recorded its fourth straight win after dropping the first three games of the Stanley Cup Final. A few other hockey teams have rallied to win series after 3–0 deficits since then, and the Boston Red Sox did it in baseball against the New York Yankees in 2004, but no team except the 1942 Maple Leafs has done it to win a major championship.

“That Detroit club invented something that’s common now, shooting the puck in from center and then forechecking like hell,” said Bob Goldham as quoted by Jim Proudfoot in a Toronto Star story in 1993. “It had us completely buffaloed.”

“We had decided before that series that Toronto, with [Syl] Apps and a powerful club, would be a problem,” Detroit’s Syd Howe told the Ottawa Journal in 1965. “It was [coach and GM] Jack Adams’ idea that we should fire the puck into their end of the rink and go and try and check the Leafs before they could get started. I never did like the idea of it, but we had a meeting and decided on it.” 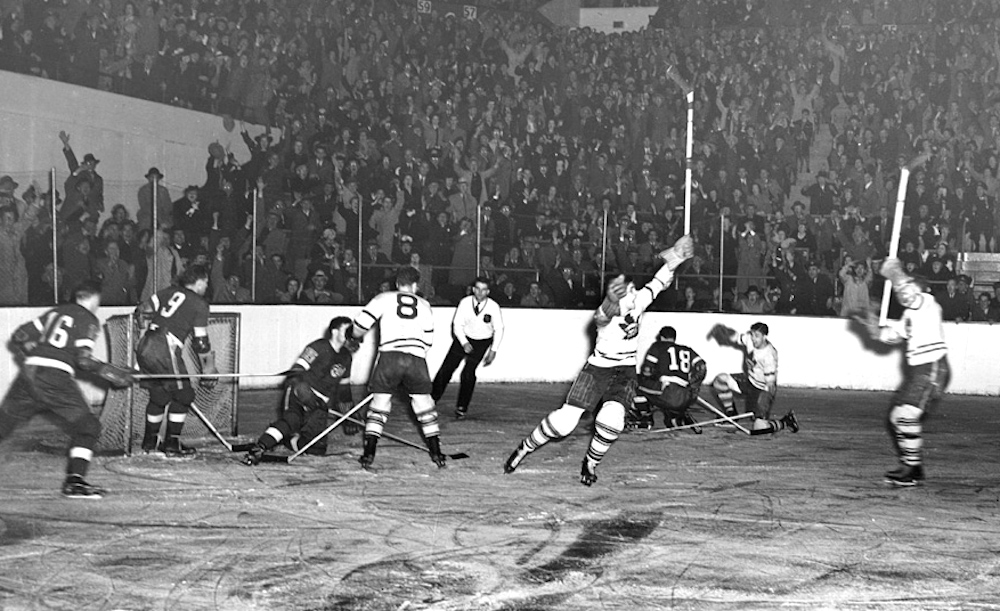 Pete Langelle celebrates his goal to put Toronto
ahead 2-1midway through the third period of Game 7.

Leafs coach Hap Day also said the team was “buffaloed” in discussing the 1942 series with Stan Fischler for his 1976 book Those Were the Days. “That was the first time any club ever shot the puck into the end zone and flooded in after it,” Day continued. “There was no center red line then, and the Detroits would simply get the puck across their own blue line and let it go into our end. Then they’d race in and get to it before we did.”

Syl Apps admitted to Fischler that after dropping the first three games, “We felt we were licked.” He said the team hoped to win Game 4 to avoid being swept but that, “the Stanley Cup wasn’t even on our minds at that point.”

As the story goes, Hap Day read a letter to the team that he’d received from a young girl prior to Game 4. “I had always found in coaching,” Day told Allen Abel of the Globe and Mail in 1983, “that it was harder to get a team ready mentally than physically… What happened after we lost the third game that year was we got a letter from a 15-year-old girl in Detroit who was a Leaf fan. She wrote that she still had confidence in our team. I read the letter to the boys in the dressing room before the fourth game. By the time I finished, you could see the walls bulging…”

Day did something more tangible too. He benched veterans Gord Drillon and Bucko McDonald, who’d been worn out by Detroit’s dump-and-chase tactics. Younger and faster Don Metz and Hank Goldup were inserted into the lineup, and Gaye Stewart was summoned from the farm team in Pittsburgh. The Leafs also changed tactics, as Sweeney Schriner – who would score the first and third goals in Game 7 – recalled to Trent Frayne as reported in the Globe in 1987.

Schriner remembered coming down early for breakfast in Detroit’s Leland Hotel on the morning of Game 4. Hap Day was huddling with Conn Smythe, and Smythe called Schriner over. “He looked worried,” Sweeney remembered. “He said, ‘Dave, what’s wrong with our hockey club?’ and I told him I thought it was that we’d changed our style. We’d been a good-staking, good-scoring team all season, but in these games with Detroit we were playing their game, bumping and grinding. That night, before the game, Hap made the player changes and we went back to our own style.”

Frayne had planned to use Shriner’s memory to open a 1970s story for Reader’s Digest in which Foster Hewitt recalled the 1942 series. “But it never saw the light of print,” wrote Frayne in his 1987 piece. “A phone call from the magazine’s editorial office in Montreal a day or two before the deadline advised me that the research department had been in touch with Day and Smythe. Both said the incident never happened.” 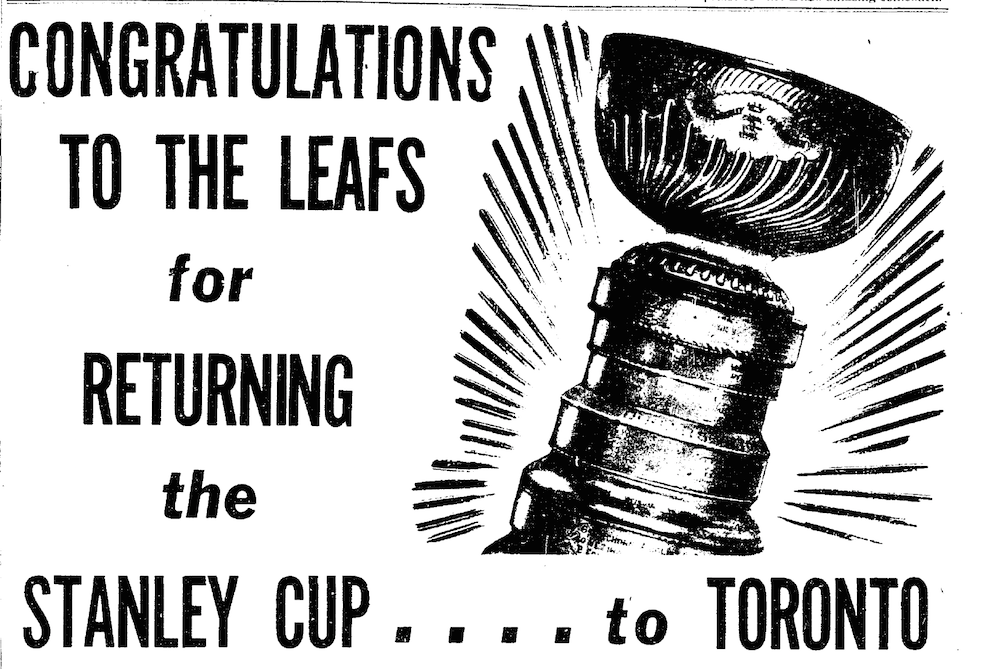 A section of the ad the makers of Eno ran in Toronto newspapers after Hap Day had
written to them to say that their product had helped to keep his team in fighting trim.

Admitting that he was “feeling like a jerk,” Frayne asked if they’d checked with Sweeney Schriner. What he was told gives a pretty good indication of the type of control men like Smythe and Day exerted over their players.

Frayne opened the Foster Hewitt piece with Day’s story about the letter instead.

Relating to last week’s story about Toronto’s 1922 Stanley Cup banquet and comments about parades, here’s some information on how Toronto celebrated the Leafs Cup wins in 1932 and 1942.

A day after the Leafs’ victory in 1932, City Clerk James Somers announced there would be no banquet for the team, nor for the amateur National Sea Fleas who had just won the Allan Cup. There was no budget for such things during the Great Depression. The city’s Civic Reception Committee, said Somer, “has been forced to limit entertainment to a minimum on account of prevailing conditions.” With Canada at War in 1942, the team held its own small banquet for players, Gardens employees and the press. “We are gathered here today,” said team executive George Cottrelle, “to pay tribute in a mild way, in keeping with the times, to our championship hockey team.”

There doesn’t appear to have been a big to-do for the Leafs’ Cup win in 1947 either, but in 1948 after the team returned from winning the Cup on the road in Detroit, the city celebrated with a ticker-tape parade and a reception at City Hall. 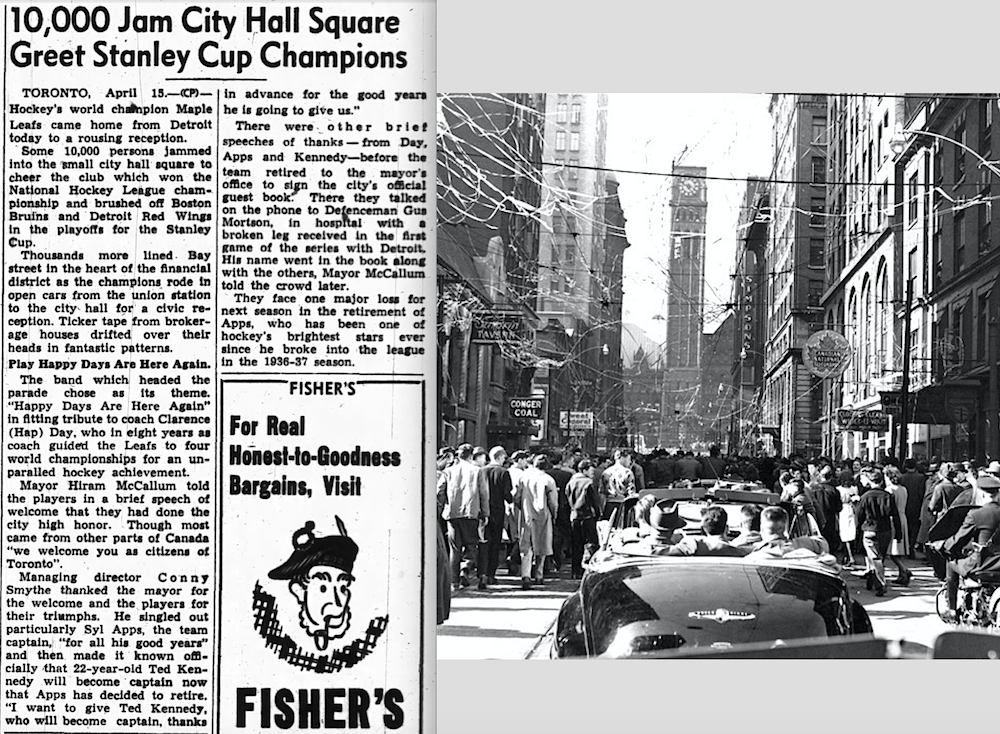 4 thoughts on “The Comeback Kids”