It will now be at least 25 years until a Canadian team follows up on Montreal’s Stanley Cup victory of 1993, but as I’ve said before in these pages, Canadian teams won the trophy all the time in the earliest days. That’s because when Lord Stanley donated his Cup in 1893, he intended it to be awarded to the championship team in the Dominion of Canada. Lord Stanley made no stipulation about amateur teams – although it’s unlikely he ever gave much thought to professionalism, which had became a pretty hot topic in Canada by the 1906-07 hockey season.

Many Canadians felt sports should only be played for the glory of the competition and were against paying the players. In the late fall of 1906, when some of the top teams and leagues in Canada announced they would allow professionals to participate – including the Stanley Cup-champion Montreal Wanderers – there were those who expected the trustees in charge of the Stanley Cup to take back the trophy. They didn’t, and since the winter of 1906-07, the Stanley Cup has been a professional trophy.

Pittsburgh is where professional hockey began. In the early years of the 1900s, Canadian players were lured to the Pennsylvania city with the promise of paychecks. It was often reported that they were actually over-paid for off-ice employment rather than receiving a salary for playing hockey. This was so the players could make a case for retaining their amateur status back home. (The Ontario Hockey Association often banned these players anyway, although most other leagues in Canada were willing to play along.)

With the Stanley Cup going pro in the winter of 1906-07, word came from Pittsburgh as early as January 19, 1907, that manager A.S. McSwigan of the local team intended to challenge the Canadian champions for the trophy if Pittsburgh won the International league title. “This would cause more interest in hockey than anything that has ever happened in the States,” noted the Pittsburgh Press that day. “There never has been a game for this celebrated cup played in which an American team participated … [but] as the cup represents the premiership of the world, the Canadian officials cannot bar a team from America from playing for it.”

But bar them they did. 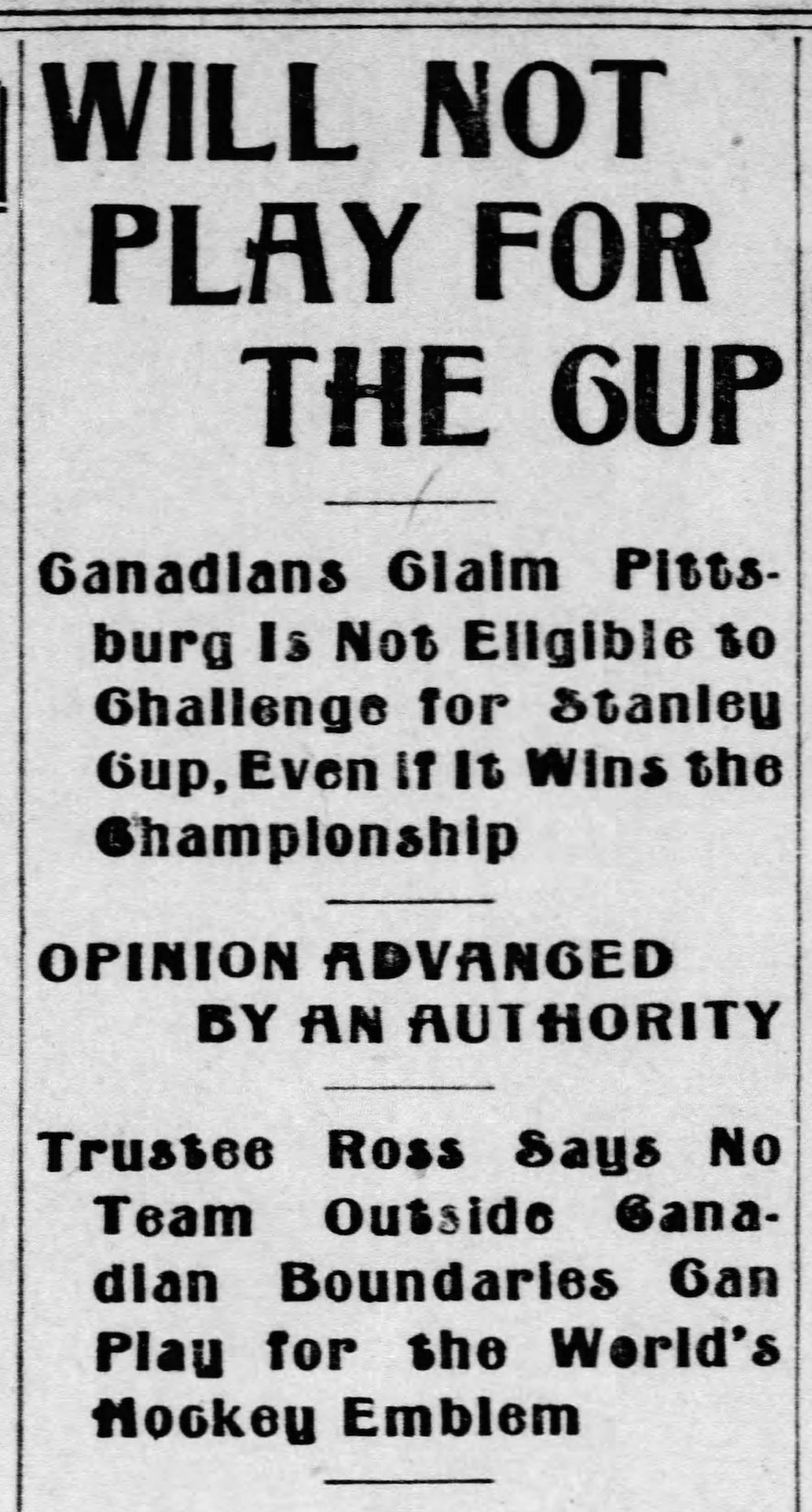 “P.D. Ross, one of the Stanley Cup trustees,” said the Pittsburgh Press on February 17, 1907, “… is reported as having stated that it is not possible for any championship hockey team outside the Canadian boundary to challenge for the trophy…

“Mr. Ross certainly looks at the matter in a strange light. If the trophy is the emblem of the championship of the world, then it is indeed queer that contests for it must be confined to teams in Canada… Mr. Ross’ opinion is likely fathered by his wish, for, of course, no true Canadian wishes to see the Stanley Cup leave the Northern boundary.”

That still seems to be true for a lot of Canadians today, and yet there’s something odd about Ross’s refusal in 1907. It had been reported in a much shorter story in the Globe in Toronto two days before the Pittsburgh report – but I haven’t been able to find it in any other Canadian paper. That includes the Ottawa Journal, which was owned and published by Philip Dansken Ross himself.

In addition, both stories say that the American teams would be barred from challenging, but that the Canadian Soo would be eligible if they won the International league title. While they were obviously a Canadian-based team, P.D. Ross would have known better than anyone that if the Canadian Soo won the Cup, that would have automatically made the other American teams in the International league eligible for it. That’s because in addition to challenge matches, the Stanley Cup would also change hands if a new team won the league title in the same league as the defending champions.

In the end, Pittsburgh lost the IHL title to Portage Lake in 1906-07, so couldn’t have challenged anyway. Still, it’s fair to wonder if the Stanley Cup trustees really issued the ruling credited to them at the time … even though it took them until early in the 1915-16 season to finally declare that U.S.-based teams could compete for the Stanley Cup. Despite the nearly quarter-century drought these days, it was probably the right decision!