The NHL opened a new season last night with games in four cities, including Toronto in Winnipeg where the Maple Leafs beat the Jets 7-2. After last season’s success, hopes are high in Toronto, where the home season begins on Saturday night against the New York Rangers.

One hundred years ago (albeit not until December 22, 1917), the first NHL game in Toronto was also played on a Saturday night. Three nights earlier, in Montreal on December 19, the Arenas (I won’t get into the name game again) had dropped the first game in NHL history 10-9 to the Wanderers.  High scores were not uncommon in this era, but 19 goals in a game was pretty unusual. Everyone in hockey knew that Toronto’s netminding tandem of Art Brooks and Sammy Hebert was nowhere near the quality of future Hall of Famers Georges Vezina of the Montreal Canadiens and Clint Benedict of the Ottawa Senators, nor even Bert Lindsay – the father of future Red Wings legend Ted Lindsay – of the Wanderers. 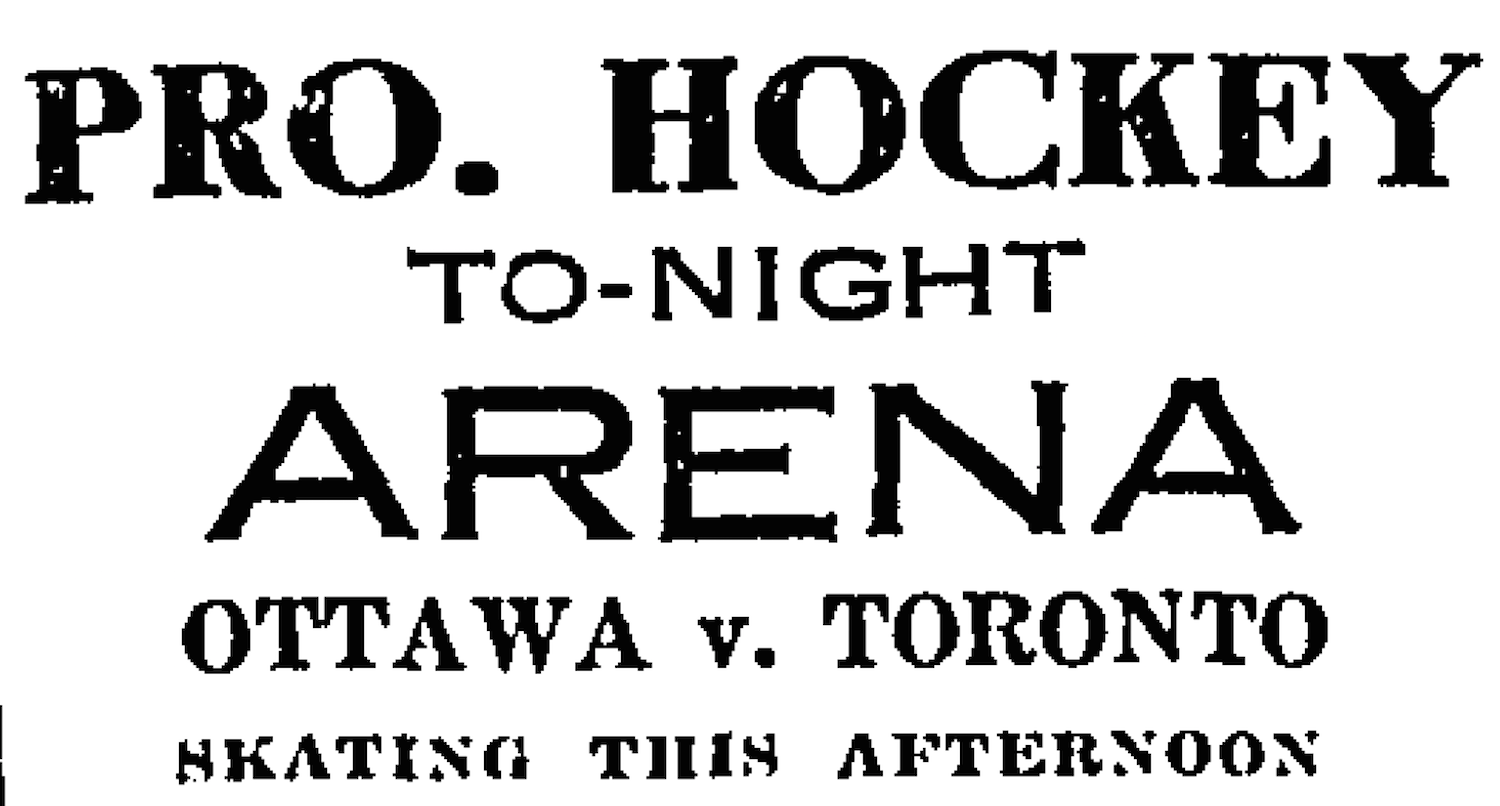 It was generally agreed that the Wanderers had been outplayed in the Montreal game, but with Hebert surrendering five goals in the first period and Brooks five more over the final two, Toronto came out on the wrong end of the score. “Our most important need is a good goalkeeper,” said team manager Charlie Querrie in The Globe newspaper on the day of the home opener against the Ottawa Senators. The Globe provided a pretty scant preview of the game, but did report that Toronto’s net might be guarded that night by a well-known (but unnamed) local amateur. The Toronto World didn’t say much either, but also noted the goaltending would need to come up big. 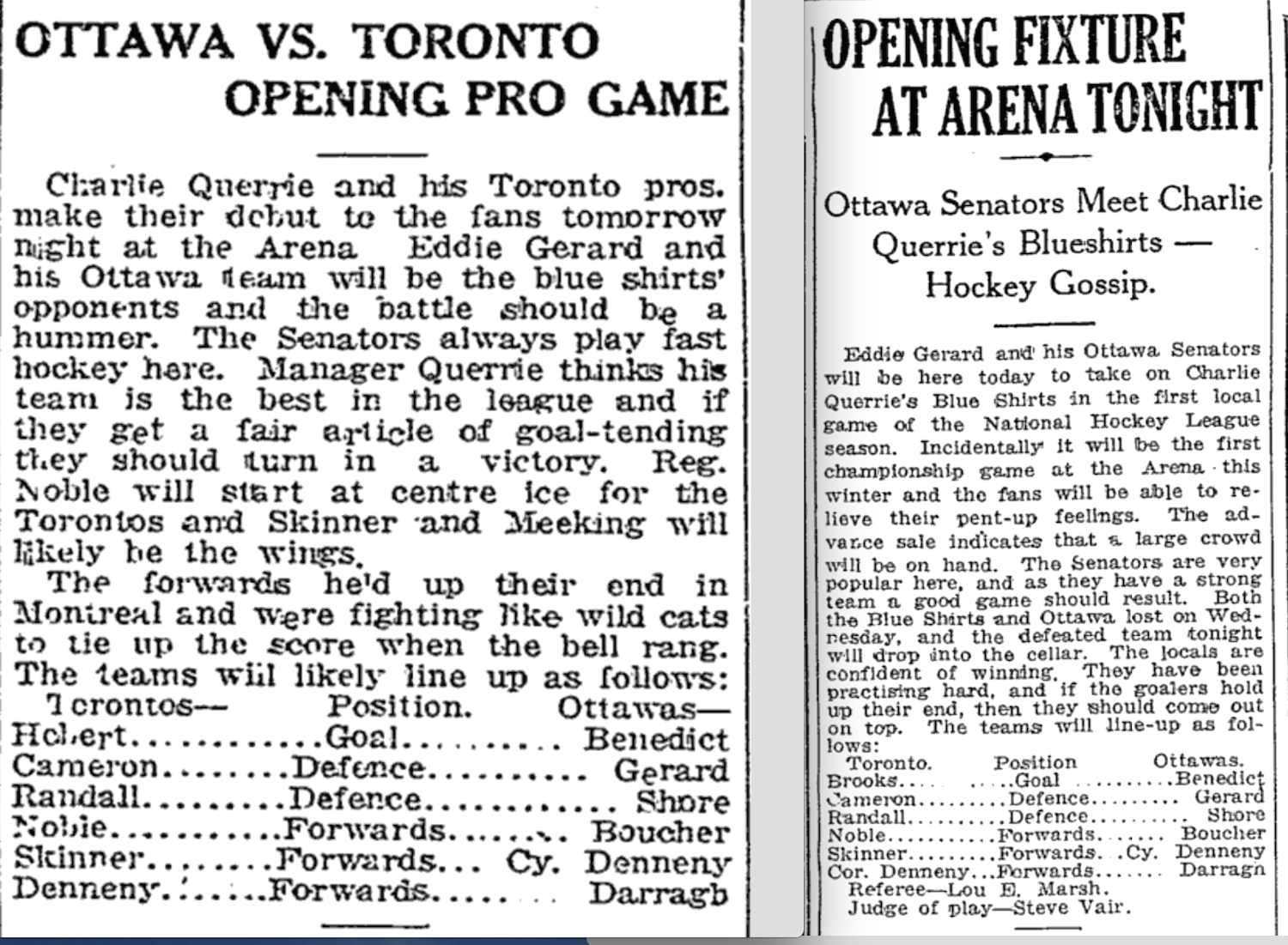 The World also reported that a large crowd was likely for Toronto’s NHL opener. The Arena Gardens – aka the Mutual Street Arena – held about 7,500 at this time, but no story I’ve seen actually notes the attendance that night. Chances are it wasn’t a sellout … although the crowd must have been quite a bit larger than the 700 or so people estimated to have been at the Wanderers’ opener in Montreal.

Hockey fan or not, no one could really argue today that the best of the sport is played anywhere but in the NHL. That wasn’t necessarily the case in 1917. While the calibre of play in the NHL and its western professional rival, the Pacific Coast Hockey Association, was likely better than that of the top amateur leagues across the country, there were just so many amateur teams and leagues in Toronto and area that the audience was easily fragmented. And, really, the brand-new NHL wasn’t seen as anything special back in 1917. It was merely considered a continuation of the old National Hockey Association (which had operated since the winter of 1909-10) under a new name.

Hockey fans in 1917 would have noted little difference between the NHA and the NHL.

But the biggest problem facing the NHL in its inaugural season was that the World had been at war since 1914. Many amateur sports leagues in Canada had shutdown for the duration, and even though pro hockey was thought to be good for morale on the home front, attendance was falling and teams were folding. By 1917, there were plenty of people wondering why some fit young men were being paid good money to play hockey at home while others were fighting and dying overseas. Indeed, on the day of the Toronto opener against Ottawa, a preview of the game in The Toronto Star shared space on the sports page with a report that former pro hockey player Eddie Roberts (the brother of future Hockey Hall of Famer Dr. Gordon Roberts, who was then starring with the PCHA’s Seattle Metropolitans) had recently been killed in action. 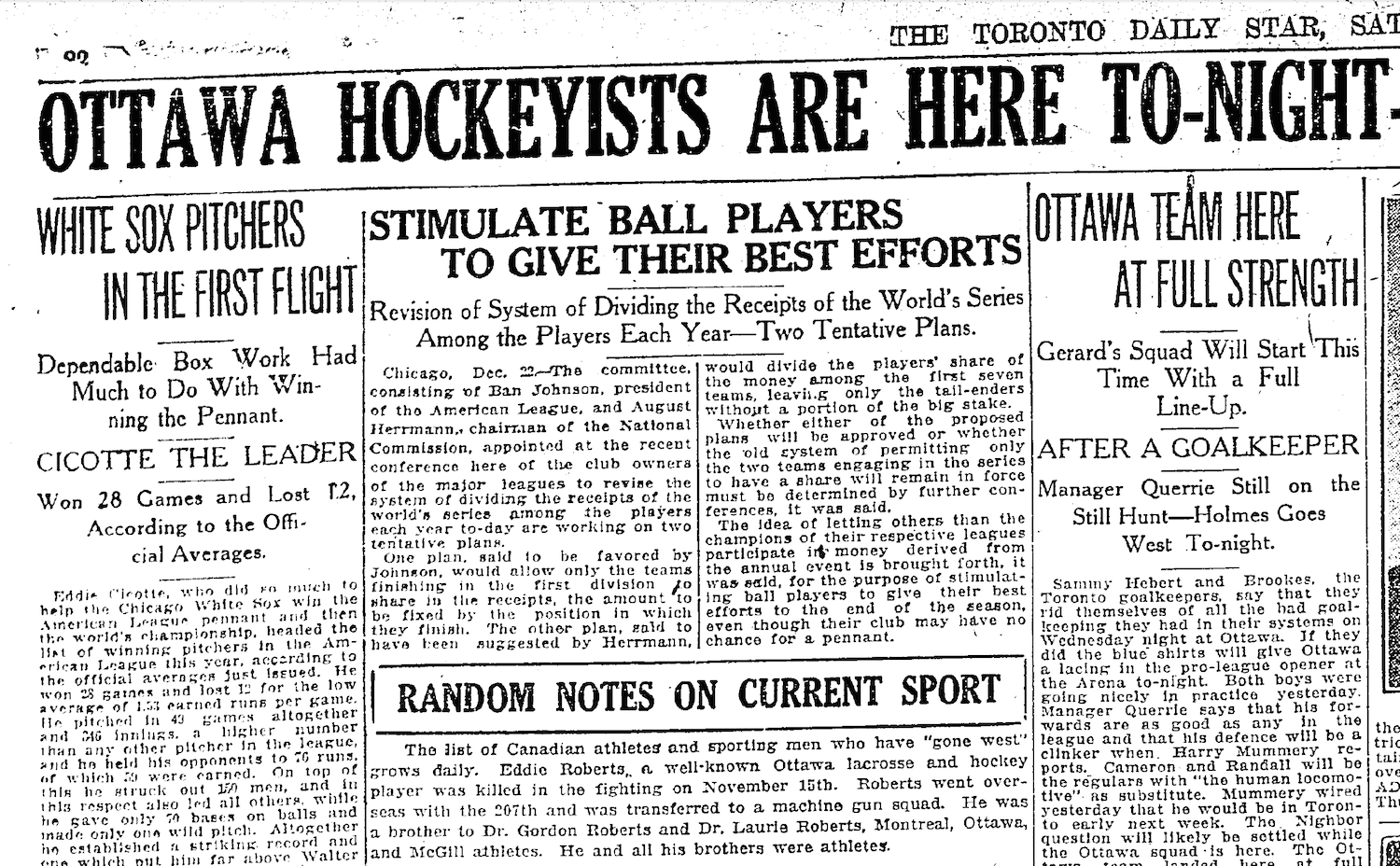 The death of Eddie Roberts is noted in Random Notes on Current Sports.

As for the opening game, Art Brooks surrendered the first goal to Ottawa, “but thereafter,” according to The Star, “the Torontos were always in control of the situation. They displayed superior speed, checked back better, were better individually, and their flashes of team play bewildered the Ottawa defense.” The result was an easy 11-4 victory.

“The much-discussed weakness expected in the Toronto nets was not in evidence,” The Star added. “Although four counters were registered against him, Brooks played a cool, collected game throughout.” 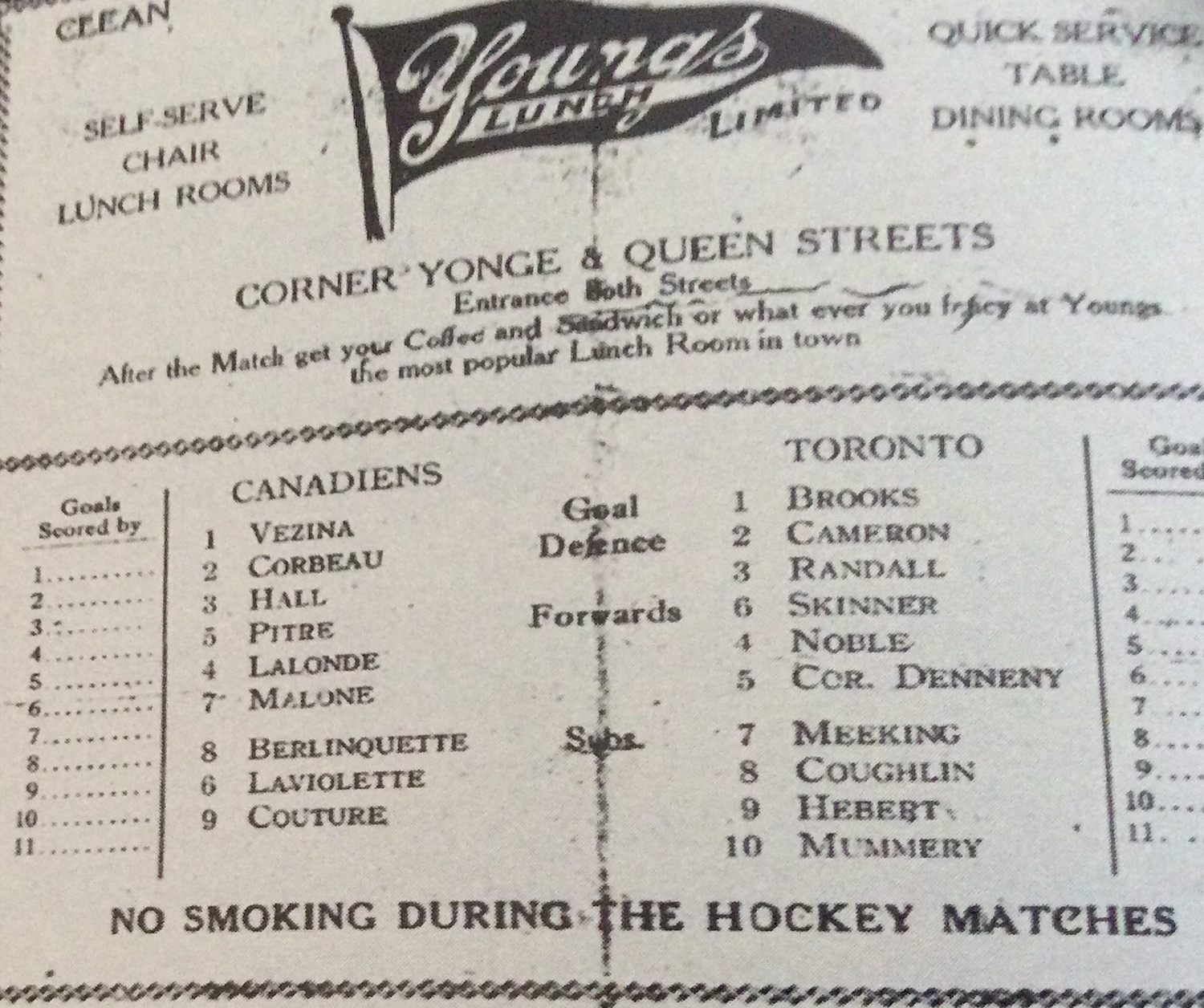 After a decent showing in the next game at home against the Canadiens, Brooks looked bad in a 9-2 loss back in Montreal and was replaced by Sammy Hebert in a 6-5 win in Ottawa on January 2. Two days later, Toronto’s goaltending problems were solved when the team was able to sign a future Hall of Fame netminder of their own: Harry “Hap” Holmes.

With Holmes in goal, Toronto went on to win the second half of the split-season NHL schedule and beat the first-half champion Canadiens in the playoffs to win the league title. They then defeated the PCHA’s Vancouver Millionaires to win the Stanley Cup.