I’ve written before about how Canadian Football runs deep in my family. I’d say the Argos, much more than the Maple Leafs, were my first favorite team. I saw my first Leafs game in December of 1970 when I was seven years old. They were only 3 1/2 years removed from their last Stanley Cup victory. I was 3 1/2 when that happened … and I have absolutely no memory of it. It’s ancient history to me. I saw my first Argos game a few months later, in the summer of 1971. They had not won the Grey Cup since 1952 and were coming off pretty close to two decades of misery. But I had no idea about that either. It was also ancient history.

In my first season of Argos fandom, the team went 10-4 and won the East Division … only to lose the Grey Cup to Calgary. Leon McQuay’s fumble wasn’t the only reason they lost that game, but perhaps the 109-yard fumble return for a touchdown that was the key to this year’s Argonauts victory over the Stampeders was Leon’s revenge!

I am certainly not the Argos fan that I once was. I worshiped Joe Theismann when I was young. I had his Quarterbacking book and tried to run the plays he diagramed with my brother David. It was tough to do with just the two of us! Jonathan was never much of a football fan, but he did have an inflatable Argos souvenir player we used to call Leon. We all played a little too rough with Leon, and the seams in his ankle gave way. My father would try to patch him for us, but our Leon always had a slow leak, which made him look kind of sad.

In my second season of Argos fandom in 1972, Joe Theismann broke his ankle. (It’s a much less famous injury than his career-ender with the Washington Redskins in 1985.) I broke my wrist around the same time. No, I was not trying to emulate my hero … but I did get to meet him at a game a week or two later. Theismann hobbled by my father and me on his crutches as the rest of the team was making its way to the field to start the game. I was too shy, but my father asked him to sign my cast.

“Well, kid,” said Theismann, “signing casts isn’t exactly my bag…” But he was smiling when he said it, and he did sign it for me. I kept it until it virtually crumbled into dust! 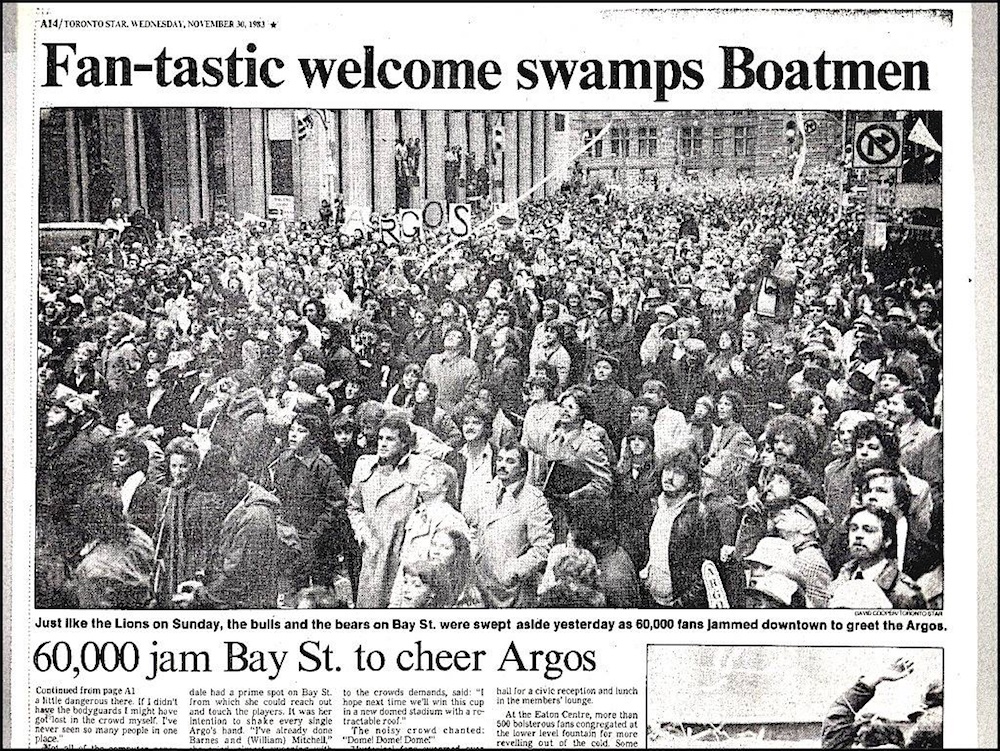 For a while after the Blue Jays came to town, we held on to our Argos season tickets, but like many in Toronto, our family’s football loyalty faded. I’ve always continued to follow the team, and we’ve often (though we didn’t this year) made it a point to at least attend any home playoff games. But really, my last great Argos enthusiasm dates back to 1983.

The year before, Toronto had hosted the 1982 Grey Cup. On either the Friday night or the Saturday before the game, my friends and I (all in first year at university at the time) headed downtown on the subway. Someone had told one of us there was a better chance of getting into the best parties if you were well dressed, so we were all in suits and ties … but I don’t recall us getting into any place special.

The Argos celebrate after a thrilling 27-24 come-from-behind
victory over Calgary on a snowy evening in Ottawa.

The Argos lost to Edmonton that year (the last of five straight for that great dynasty), but the next year, Toronto returned to the Grey Cup and defeated the B.C. Lions in Vancouver. This was the first time in my memory that my hometown team had won a championship. Given how long it had taken the Argos since their last Grey Cup, how poor the Leafs had become, and how relatively little the Blue Jays had accomplished yet, I had no idea if I’d ever see one again! So, I did everything you’re supposed to do to celebrate. I went out to the airport to welcome the team home (there was a pretty big crowd there!) and I went to the championship parade. It was all a lot of fun, but I guess the excitement didn’t really last for me. 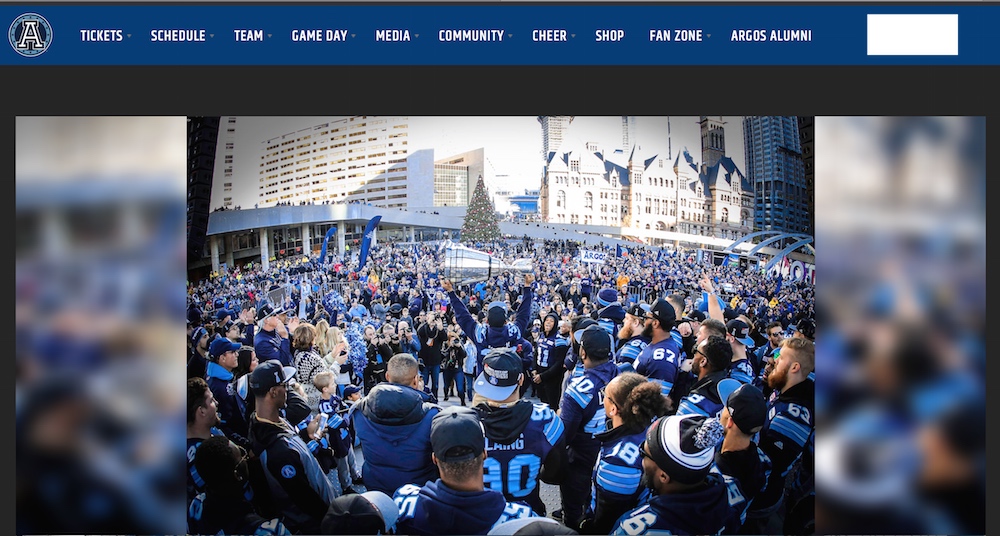 The weather was much nicer yesterday for the Grey Cup rally at City Hall in Toronto.

The Argos were founded in 1874, which makes them the oldest team in North American professional sports. It’s a shame to see how far out of favor Canadian football has fallen in the country’s largest city. I hope this year’s championship gives the team a real boost … but I know I’m not the only one who has his doubts about that.