I thought this story would be quick and easy. But I was wrong.

A week ago, on November 29, a statue of Jackie Robinson was unveiled at the Rose Bowl in Pasadena, California. What makes this new statue different from others commemorating the man who broke modern baseball’s racial barrier is that this one honours Jackie Robinson’s contributions to football in Southern California where he grew up.

Jackie Robinson wearing the #55 he sported while starring at Pasadena Junior College.

Robinson was a four-sport star, excelling at football, baseball, basketball and track, at Pasadena Junior College in 1937 and 1938 and then at UCLA in 1939 and 1940. The stories I saw about the unveiling of the football statue mentioned that Robinson played many games at the Rose Bowl and that his 104-yard kickoff return there is still thought to be the longest touchdown run in the history of the storied stadium.

I thought it would be fun to find a newspaper clipping about that run and set out to hunt one down. Generally speaking, the many books and articles written about Robinson over the years seemed to agree that the play happened during the final game of Pasadena’s perfect 11-and-0 season in 1938. 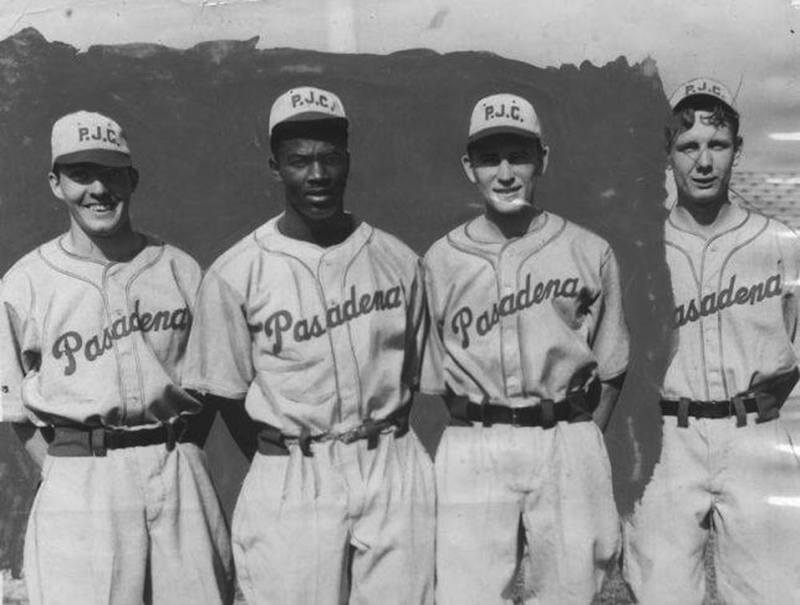 Jackie Robinson was a remarkable athlete, and football may well have been his best sport. He played quarterback and safety at Pasadena Junior College and during that undefeated season in 1938 he rushed for over 1,000 yards. Older sources say he scored 17 touchdowns, but newer research claims he had 18. Robinson also threw seven touchdown passes, kicked one field goal and converted many of his team’s touchdowns too. In all, he scored 131 of his team’s 369 points.

So, I figured it wouldn’t be too hard to find evidence of a 104-yard touchdown run. Then again, Robinson was playing at a Junior College in an area of the United States with more universities than anywhere else. His games did get covered in many of the California newspapers I can find online, but there’s not always a lot of detail.

There’s likely more in a Pasadena paper hiding in a library somewhere, but I couldn’t find much from the 39-6 win over lowly Cal Tech on Wednesday night, November 23, 1938. There’s nothing about a 104-yard touchdown, and though I’ve seen stories and books putting the attendance anywhere from 18,000 to 30,000 that night, the newspapers I’ve found show only 3,500. 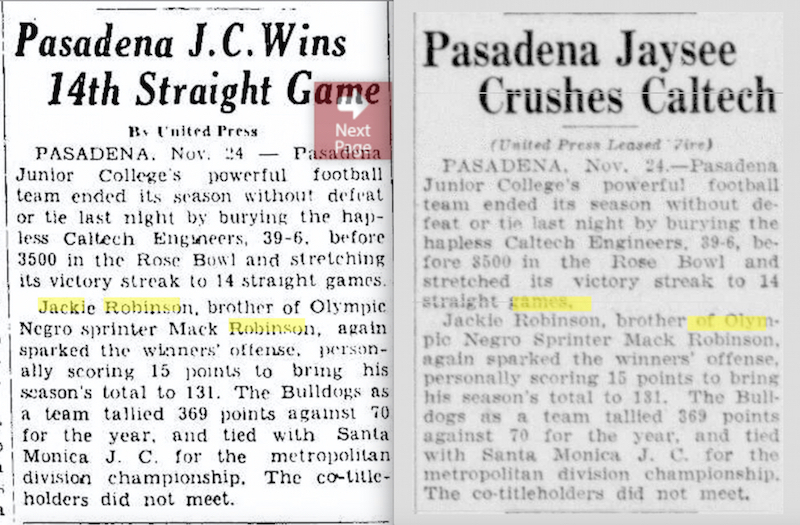 United Press stories on the Cal Tech game from newspapers in Berkley and Bakersfield.

As I expanded my search, I found several references over the years saying that Jackie Robinson had run for “only” a 99-yard touchdown in the Cal Tech game. However, in the description I found for the 1939 Junior College Annual of Pasadena City College available online at Abebooks (you can buy it for US$540 if you choose!), there’s a very detailed account of the 1938 football season. Of the game in question, it says: “Jack Robinson and 16 other seniors rang down the curtain on their Pasadena football careers as they walloped cross town rival Cal Tech 39-6…. Robinson’s closing chapter was a 104-yard run to the touchdown, climaxing the greatest individual career in jaysee history.”

Beyond that, the next mention I could find of Robinson running for a 104-yard touchdown doesn’t appear until an April 12, 1977, story in the Los Angeles Times marking the upcoming 30th anniversary of Robinson’s Major League debut with the Brooklyn Dodgers.

“The season ended,” wrote Shav Glick of Robinson’s 1938 Pasadena football campaign, “with Cal Tech and another 30,000 in the Rose Bowl and Robinson’s final contribution was a 104-yard kickoff return.”

Shav Glick knew Robinson personally. They both attended Pasadena Junior College together. Glick first started reporting sports in Pasadena as a 14-year-old in 1935 and wrote his final column for the Los Angeles Times in January of 2006 at the age of 85. He was likely at the Cal Tech game, and may have been writing from memory, or from old newspaper stories he himself had written and saved. He may well have written that recap from 1939. 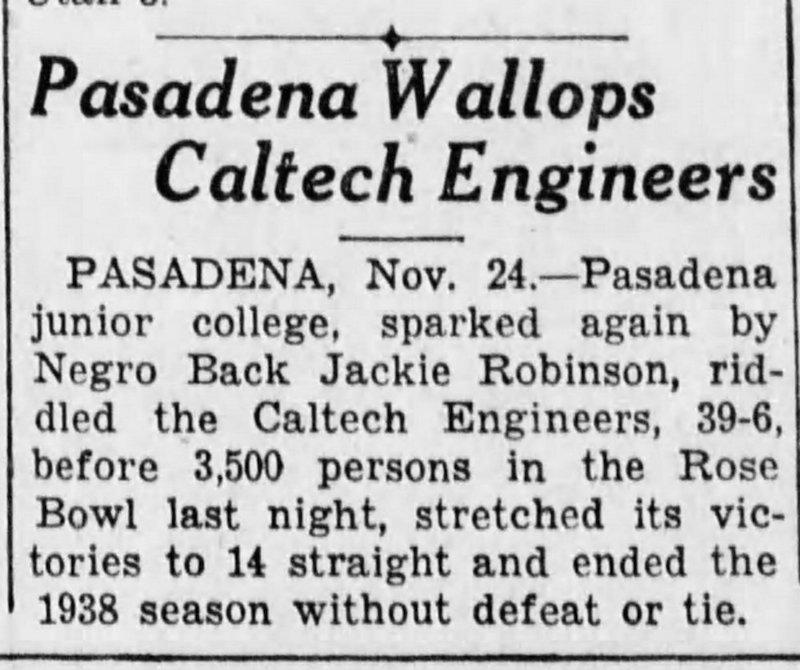 Brief coverage of the Cal Tech game in the San Bernadino County Sun.

Interviewed for a 1997 story in the New York Daily News, Glick said of Robinson’s football skills, “He was so spectacular. In a game against Cal Tech, Robinson returned a kickoff 104 yards and collapsed in the end zone.” Added Hank Ives, longtime publisher of JC Grid-Wire and the foremost authority on Junior College football: “He must have run 200-plus yards. He reversed his field twice, running back and forth.”

Ives was born in Southern California in 1926, so perhaps he was at the game that night too. And yet…

Many of the biographies of Jackie Robinson mention his 104-yard touchdown run. Most note that it was a kickoff return. But not all. In his 1997 biography of Jackie Robinson, Arnold Rampersad wrote of that 39-6 win over Cal Tech: “In the next game, his last as a Bulldog, Jack said farewell with a masterpiece. Setting up behind his own goal line in punt formation, he gathered in the hiked ball, then raced 104 yards for a touchdown against a muddle of disbelieving Cal Tech players.” 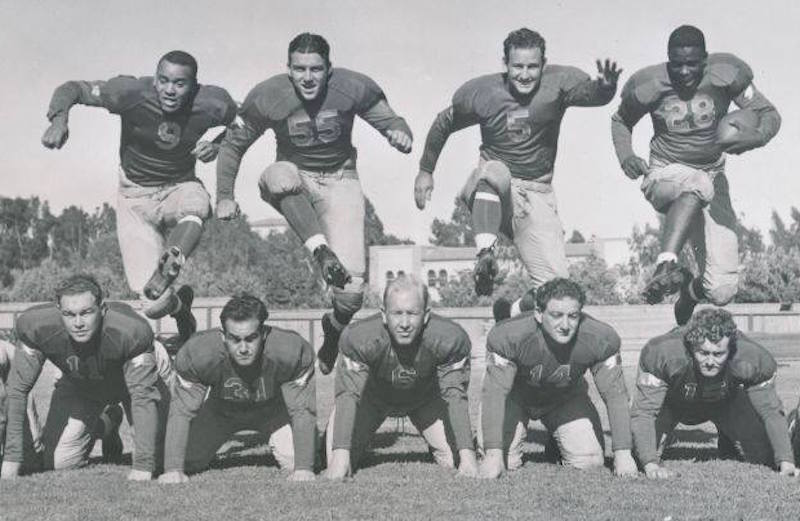 That seems rather incredible. Perhaps even foolhardy, although no doubt the Pasadena team felt they could crush Cal Tech even if this gamble turned over the ball so close to their own goal line. And there’s a little corroborating evidence too. Jules Tygiel made no mention of it in his 1983 book The Great Experiment, but wrote of Robinson’s touchdown prowess in Pasadena in an article for the Los Angeles Times in 2006, “the last [came on] a 104-yard dash on a fake punt.”

At this point, it seems impossible to know for sure, but I’m leaning towards the fake punt rather than a kickoff return. If anyone knows of a detailed, first-hand account of the game, I’d love to see it.

1 thought on “Jack of All Trades Was a Master Too”