On this day in history 100 years ago, on January 9, 1918, just three weeks into its inaugural season, the NHL made an important rule change. It would now allow goalies to leave their feet and fall to the ice to make a save. This rule change was the focus of a story I wrote last month for the New York Times. It’s also in a story I wrote three years ago for this web site.

To make the New York Times story different, I sought out several NHL goaltenders past and present to speak with. This gave me my first opportunity to talk with “Mr. Goalie” Glenn Hall … and what would sadly turn out to be my last chance to speak with Johnny Bower. 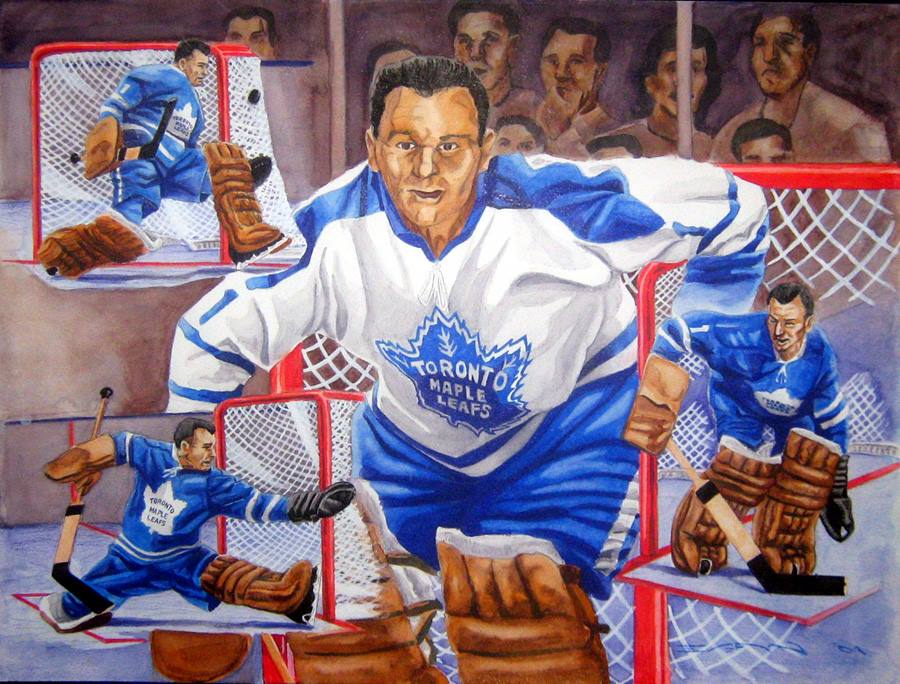 I spoke to Johnny Bower on October 17. It was a couple of weeks before his 93rd birthday. He answered the phone, but for the first time (and admittedly, I’ve only spoken to him a few times before), he sounded old. I explained that I would like to ask him a few questions, and he told me he really didn’t like to do interviews anymore. He wasn’t sure he still had the memory for it. I said I’d ask him one question, and if he didn’t feel he could answer, we didn’t have to continue. I asked him my question, and one thing quickly led to another. No problem with his memory that I could detect!

As noted in my Times story, Bower told me he was unaware there had originally been a rule requiring goalies to remain standing. He also told me it probably wouldn’t have made much of a difference to his decision to become a goalie. “No one really flopped down,” he said. “As a child, I would stand up, I was scared. No one had to say anything to me.”

But, of course, there would be occasions when he had to drop to the ice to make a save. “My dad said, ‘you fall too much.’ I said ‘Dad, you don’t know hockey. I have to do what I have to do.’ It turned out just great.” Bower told me he always considered himself a standup goaltender, “but the poke check was a big plus.” 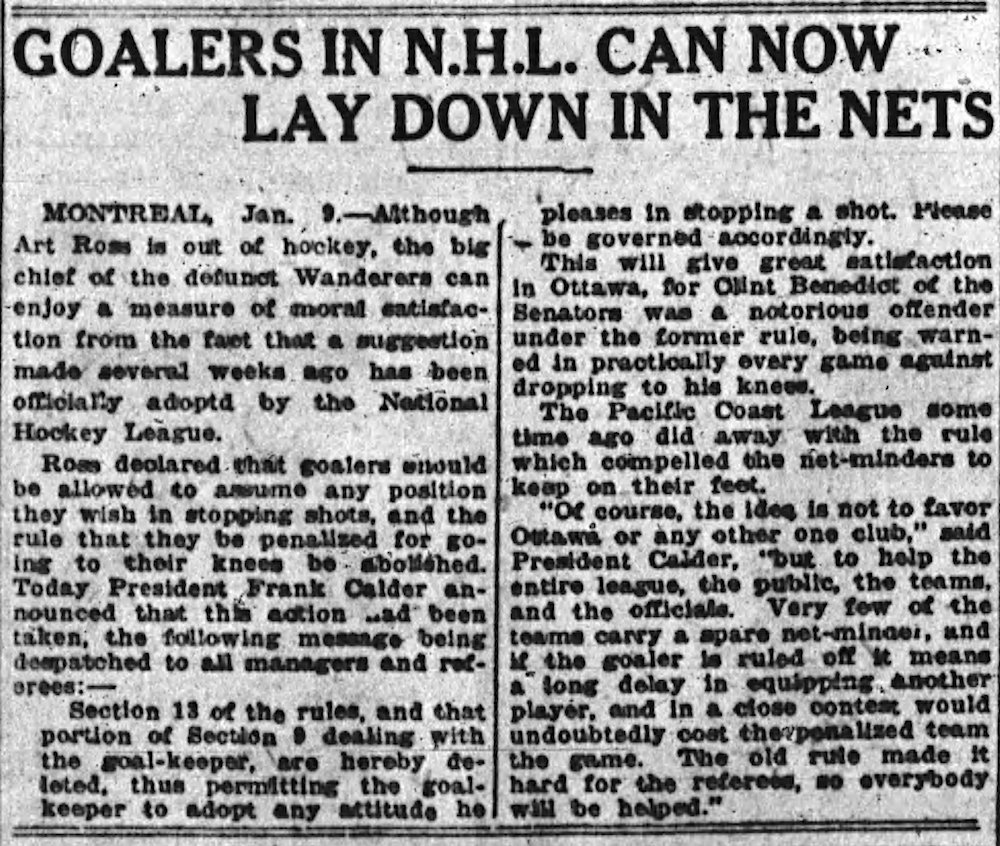 This announcement  was made by NHL president Frank Calder from his office
in Montreal on January 9, 1918. (From the Ottawa Journal, January 10, 1918.)

The poke check, often diving head first (without a mask!) toward an on-rushing opponent, became Bower’s signature move.  As Leafs president Brendan Shanahan told reporters shortly after Bower’s death on Boxing Day: “Not too many people in sports have a name where it almost becomes a verb. If you were playing street hockey and you poke-checked somebody, you’d yell, ‘Johnny Bower. I just Johnny Bowered you.’”

Like Johnny Bower, Glenn Hall regarded himself as a standup goaltender, even though he’s considered the pioneer of the butterfly style. Spreading his legs wide to block the bottom of the net was merely an extension of his natural style. “I always played in a deep crouch,” he explained. “[Terry] Sawchuk did too. But I looked at the other goalkeepers who were just a little before me; Chuck Rayner and Sugar Jim Henry were two of my favourites. Both were standup.”

Hall told me that when he was playing junior hockey in the Red Wings farm system in Windsor, Ontario, he would go to Detroit to watch NHL games. “That’s when I saw those guys … but I never saw a goalkeeper I didn’t like. You didn’t steal from them exactly, but you noticed what they were doing and if it was getting results or making things more difficult.” 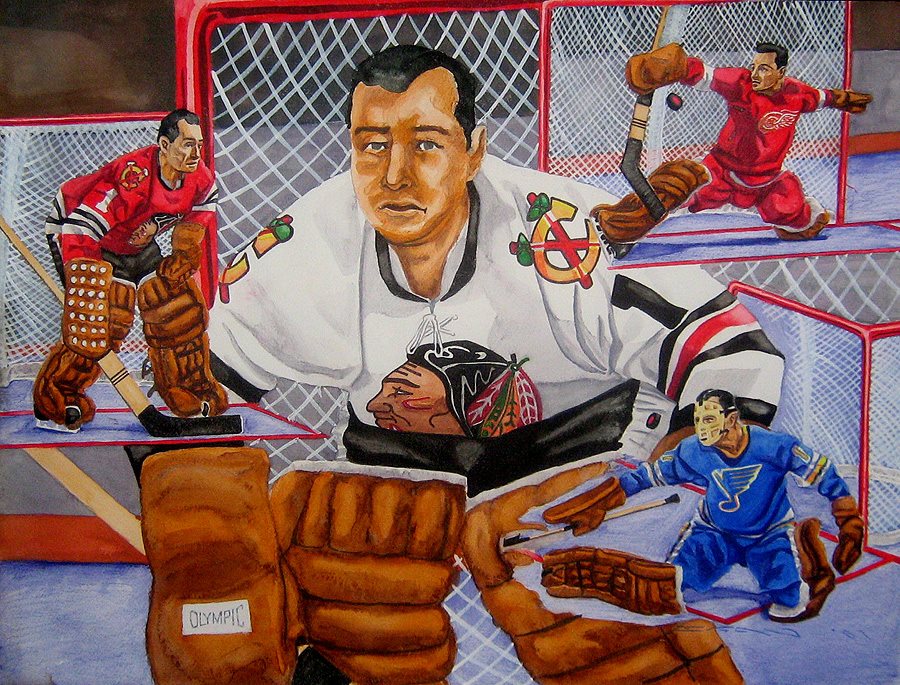 Hall was aware of the old rule about goalies standing. “I think at one time I knew that,” he said. But even long after the rule had changed, coaches in his era weren’t exactly progressive in their thinking. “They had a few silly rules. Coaches would holler, ‘Stand up. Don’t touch the puck unless it’s going in the net.’ So many stupid things.”

There were no specialized goalie coaches in Glenn Hall’s time. The men behind the bench were usually ex-forwards or defensemen. “You never thought of the coaches,” he said. “They didn’t know anything about playing goal.” Former Boston Bruins goaltending great Tiny Thompson was a Black Hawks scout when Hall got to Chicago. “I liked to talk to him, but he never offered any hockey advice. Nor did I ask him.”

I asked Hall who was the best goalie he ever saw. “I never played against anyone I thought was better than me,” he said with a smile in his voice. But he did admit that, “Sawchuk, in his first four years, was unbelievable.” He also loved Gump Worsley and Johnny Bower. “Both were great goalies.” (Unfortunately, I didn’t realize until we were done that I hadn’t asked him about Jacques Plante.) 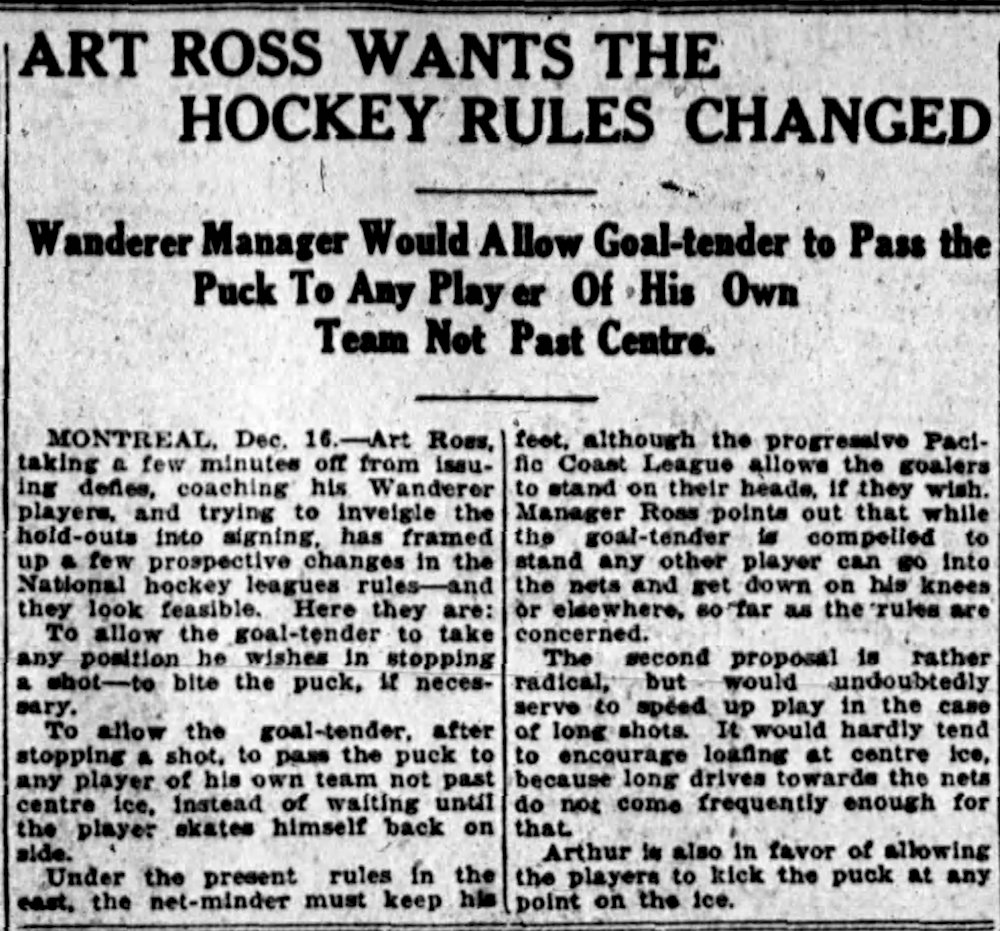 Clint Benedict’s habit of accidentally falling to the ice is often credited with changing
the NHL rule about goalies, but Art Ross had spoken in favour of the change prior to
the start of the first NHL season. (From the Ottawa Journal, December 17, 1917.)

More recently, Martin Brodeur was someone Hall admired, but he had trouble relating to Dominik Hasek. “Hasek was different,” he said. “I wasn’t watching a lot of hockey then, but I hated to guess and a lot of Hasek’s moves looked like guess-type moves. He must have known what he was doing, but I would have had trouble playing like that.”

So would Mr. Goalie – a man who has a reputation for being sick to his stomach before nearly every game he played – still have wanted to be a goalie if the rules had required him to remain standing?

“Yes, of course! I didn’t start playing goal until I was about 10 or 11, but I found out it was the most interesting spot to play. That’s where all the action was. That’s what made it enjoyable. That’s where things were happening.”

8 thoughts on “An Ode to Old Goalies”