Leafs legend Johnny Bower passed away on Tuesday at the age of 93. Much has already been said and written about him, most of it conveying that as great a goalie as he was, Bower was an even better person. My personal experiences with him were few, but any time I had the opportunity to speak with him, it was always special. 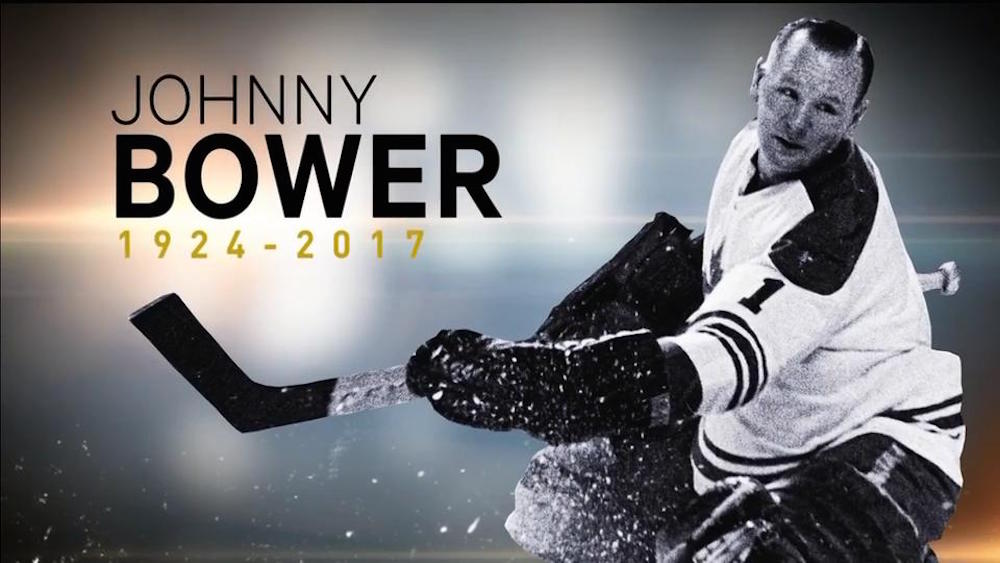 Bower’s exact age had long been something of a mystery. As a young boy, he lied about his age to join the Canadian Army in World Word II. (Many stories say he was only 15 at the time, others say 16). During his career, he enjoyed playing along with the guessing game, but in recent years it was determined that he was (probably!) born on November 8, 1924. His name at the time was John Kiszkan.

A respiratory infection in 1942 likely saved Bower/Kiszkan’s life when he had to be hospitalized instead of being sent to France for the disastrous Dieppe Raid. After being discharged due to rheumatoid arthritis in his hands in 1943, Kiszkan returned to his home town of Prince Albert, Saskatchewan, where he quickly resumed his hockey career. He played for the Prince Albert M and C Warhawks and helped them win the Western Canada Intermediate hockey championship at the end of the winter in 1944. 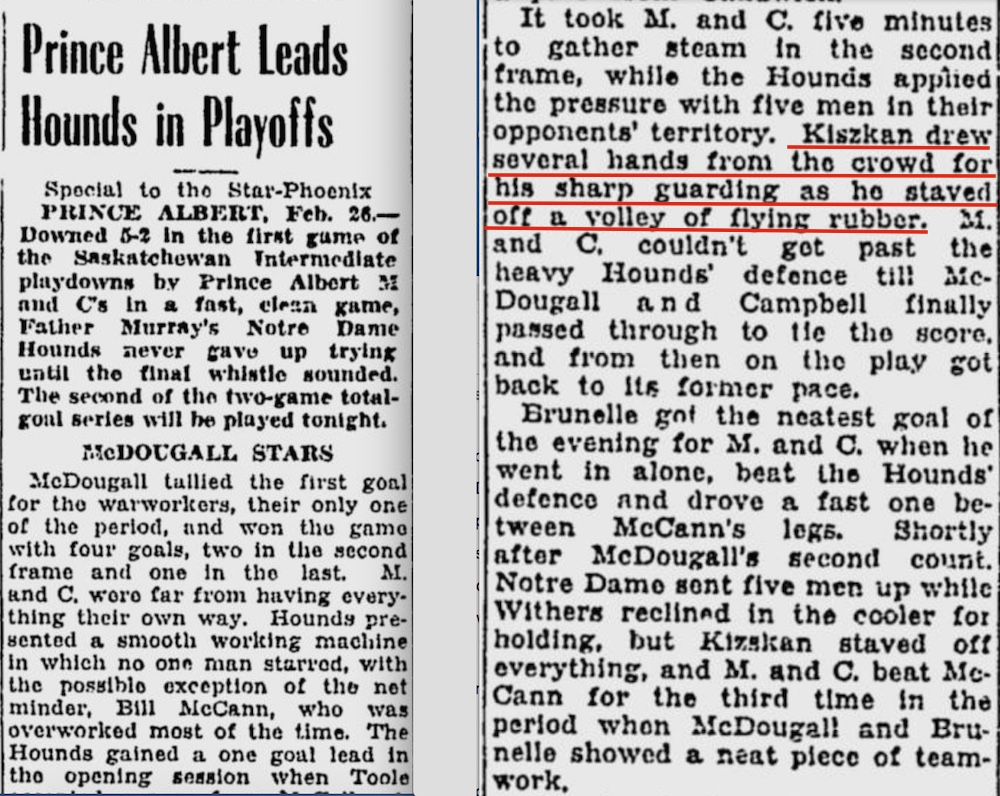 The Saskatoon Star-Phoenix of February 26, 1944, reports on Prince Albert’s 5-2 victory
over the Notre Dame Hounds to open the Intermediate Provincial championship. 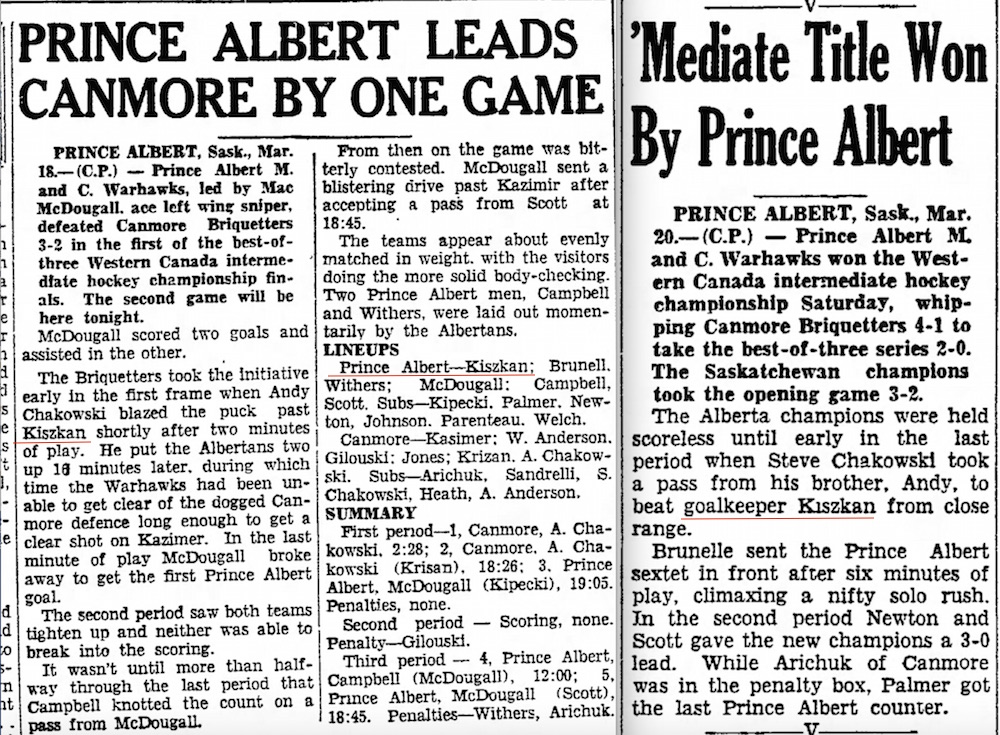 Stories on Prince Albert’s two-game sweep of the Western Canada title
are from The Lethbridge Herald on March 18 and 20, 1944.

In the fall of 1944, John Kiszkan had a professional tryout with the Cleveland Barons of the American Hockey League. He didn’t catch on, returning once again to Prince Albert where he played Junior hockey. His Prince Albert Black Hawks won the North Saskatchewan championship in 1945 but lost the Provincial title to the Moose Jaw Canucks of the Southern Saskatchewan Junior Hockey League. 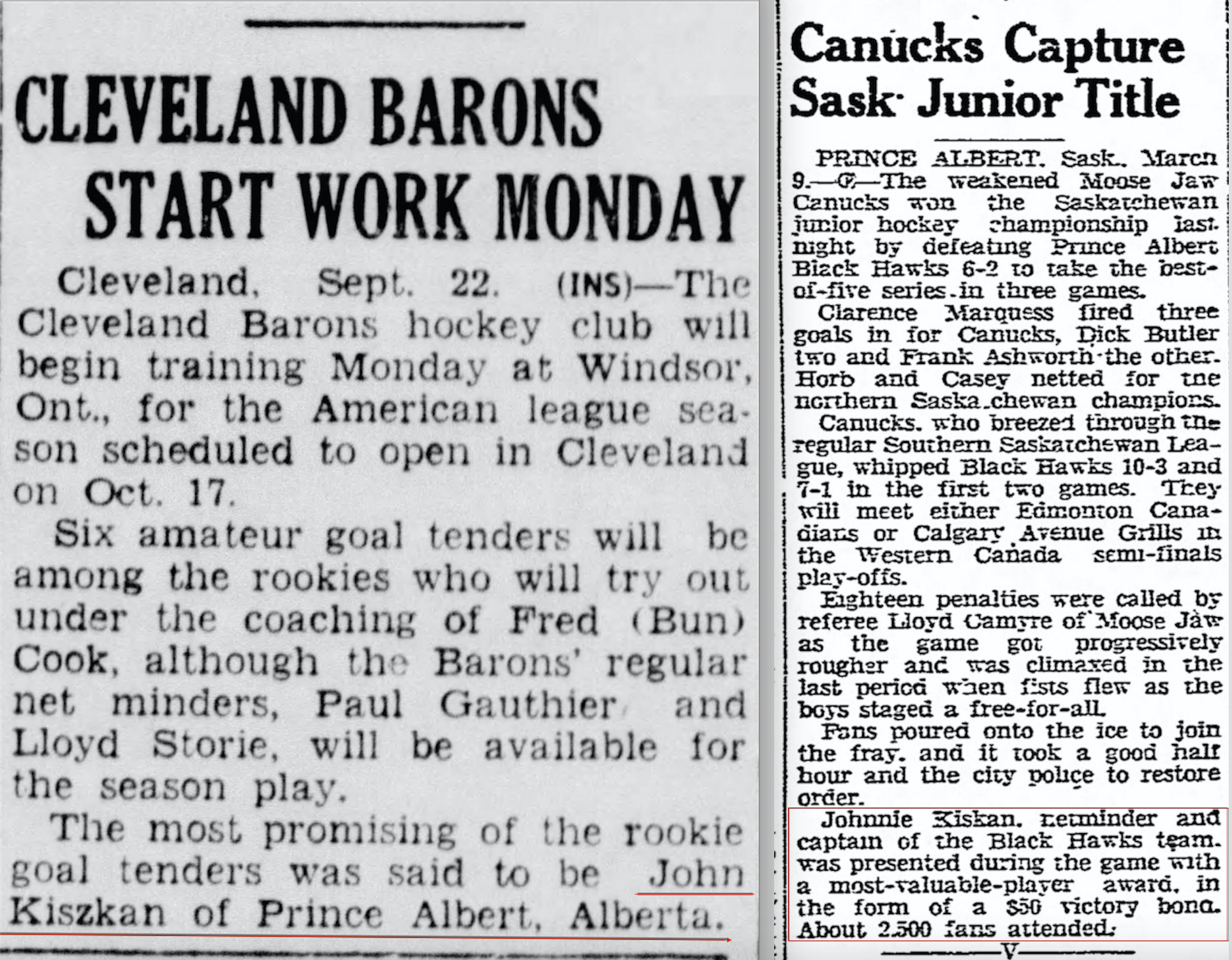 Cleveland Barons story from the New Philadelphia (Ohio) Daily Times on September 29. 1944. The Saskatchewan Junior story is from The Lethbridge Herald on March 9, 1945.

The next season, 1945-46, Kiszkan began his lengthy minor league apprenticeship in Cleveland that would eventually lead to his great success in Toronto.

A year later, John Kiszkan (whose last name had often been misspelled in newspapers, and must have been mispronounced by broadcasters as well) decided that his surname was just too difficult for the sports media. Bob Duff, co-author The China Wall: The Timeless Legend of Johnny Bower, told me that Johnny’s parents had separated by then, and when he turned 21, Johnny had his sister Rose, who worked in a legal office, help him change his name to Bower. It was their mother’s maiden name. 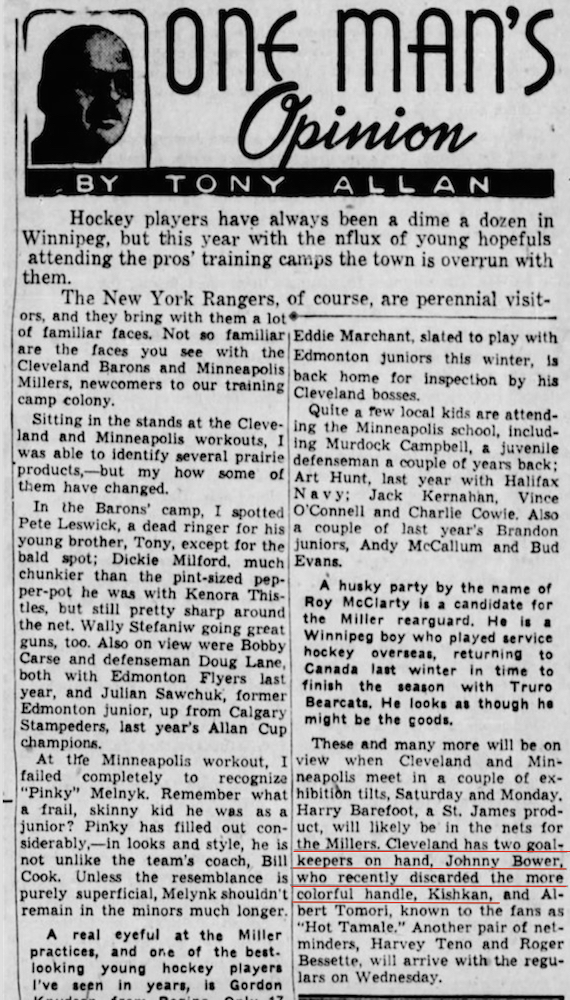 The Cleveland Barons were training in the Manitoba Capital when
this story appeared in the Winnipeg Tribune on September 24, 1946.

His name appeared as John (Kiszkan) Bower in many newspapers throughout the 1946-47 season with Cleveland … but he would be Johnny Bower for ever after.

12 thoughts on “Before He Was Bower”