Quick trivia question for you. Which goalie holds the NHL record for lowest career average? No tricks. It’s not someone who played one career game and managed a shutout. Is it Georges Vezina? George Hainsworth? Terry Sawchuk? Jacques Plante?

In 12 seasons between 1924 and 1937, Connell posted a career average of 1.91. He also set an NHL record with six straight shutouts during the 1927-28 season in a scoreless streak that stretched 460 minutes and 49 seconds. It’s true he only played 417 games in his career (a top goalie today would reach that number in about seven seasons) and that he played during the lowest-scoring era in hockey history with only limited forward passing for some of that time. Still, somebody has to be the lowest, and Alec Connell is it. 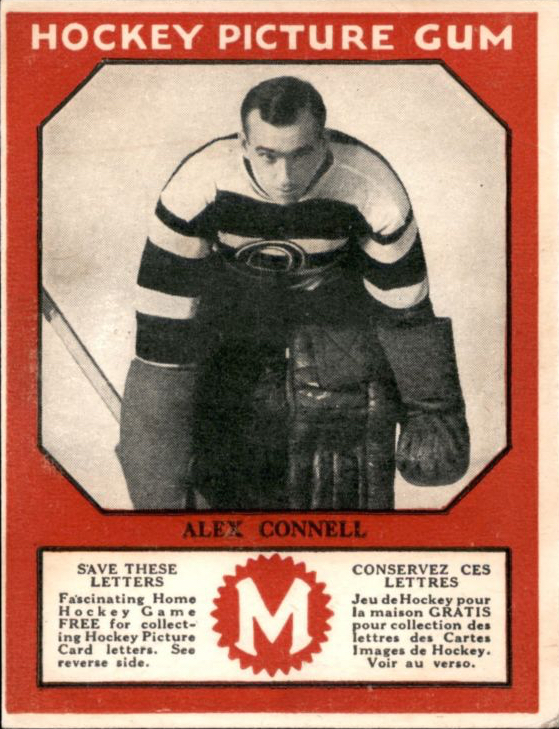 Tomorrow marks Connell’s birthday. (His given name was Alexander, with no apparent middle name, but whether he actually went by Alex or Alec is a whole other debate!) He’d be turning 118 years old. Probably. He might actually be turning 119. Or maybe only 116.

I know… You’ve heard these things from me before. Just recently, I wrote a little bit about Johnny Bower’s birthday mystery and I’ve written entire stories about the birth dates of Art Ross and King Clancy. But I hope you’ll indulge me one more time.

NHL records show that Alec Connell was born on February 8, 1902. That’s what the Hockey Hall of Fame has too. It’s what we had in the two editions of Total Hockey back in 1998 and 2000. I don’t have access to any of the earliest NHL Guides, but I think that’s a date we inherited from way back. My guess would be that at some point in the mid 1930s, when it seems the first efforts were being made to catalogue this type of information, Connell decided it might be advantageous to be a few years younger.

It’s said that Connell didn’t begin to play hockey until he was in the Canadian Army and training at Kingston, Ontario, during World War I. He couldn’t even skate, which seems odd for a boy of his era who grew up as part of an athletic family in Ottawa. Still, with his prowess at lacrosse it was thought he’d be a natural at hockey, and being a non-skater, who was also a catcher in baseball, goalie seemed the best position for him.

By 1920, Connell was back in Ottawa and would begin to put up impressive numbers with various teams in the amateur City League. In 1924, he turned pro with the Ottawa Senators and beat out Joe Ironstone (one of pro hockey’s first Jewish players) with an impressive training camp and a strong performance in two preseason games against the Calgary Tigers of the Western Canada Hockey League.

Alec Connell’s debut with the Senators on November 24, 1924 earned a note
in the sub-headline and a cute cartoon in the next day’s Ottawa Journal.

Young and skilled, no one probably cared much about Alec Connell’s age at that point … and if someone had asked him, he might not have been sure of it himself! One thing seems pretty obvious, though. He was NOT born in 1902.

Connell must have been born by 1901 because he appears in the Canadian Census that year as the youngest of seven children in an Irish Catholic family. His birthdate is listed as 8 Feb 1900 and his age as 1.

Ten years later, all seven Connell children are still living at home, but young Alex (as he’s listed) has aged 11 years and is now recorded as being born in 1899.

His War records are equally confusing. He has a medical history that seems to show he enlisted in 1917, so he may well have chosen to lie about his age. 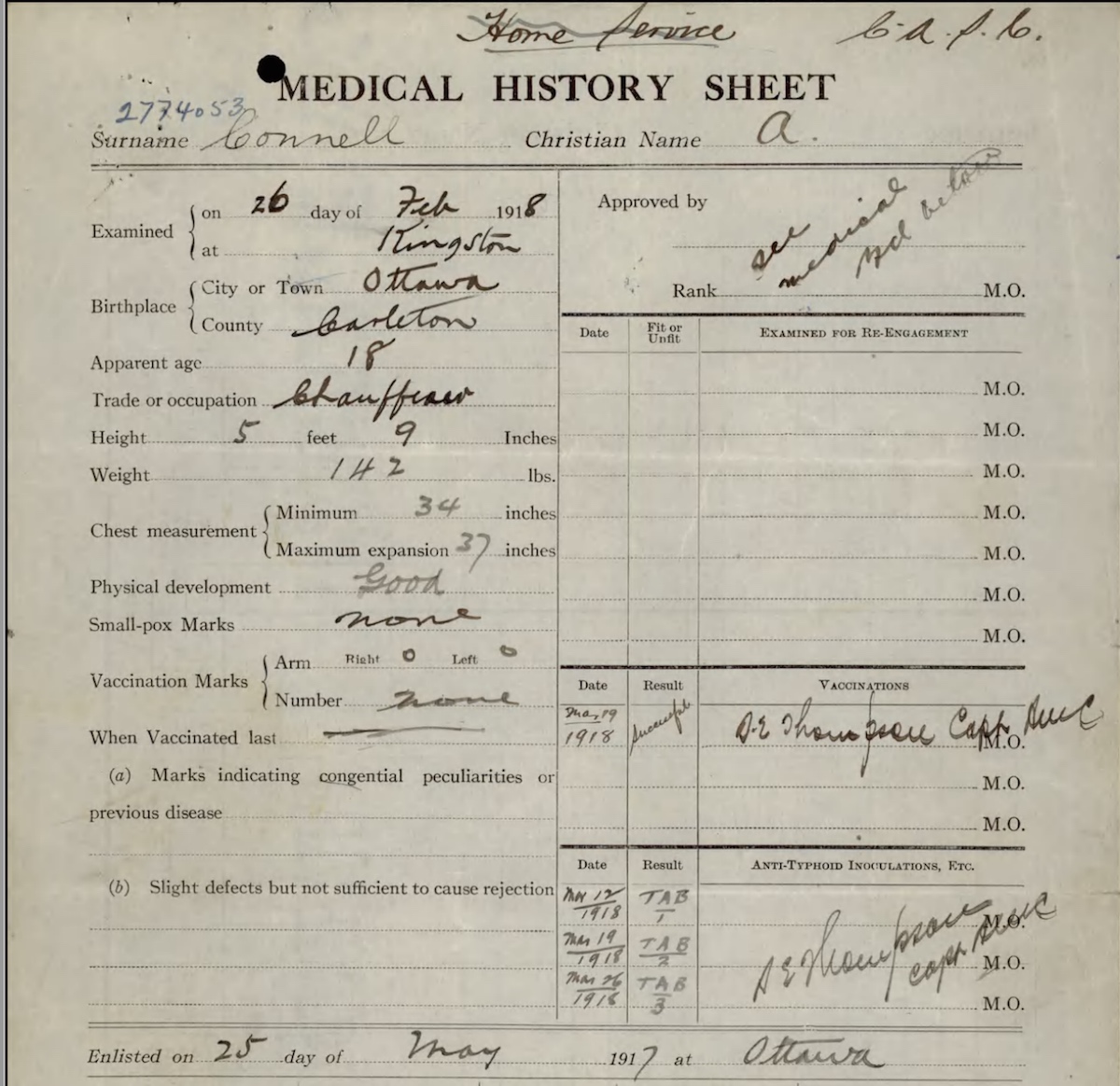 Strangely, in an Attestation Paper apparently signed by him on October 7, 1918, (when he would have been of age) Connell’s date of birth is left blank. 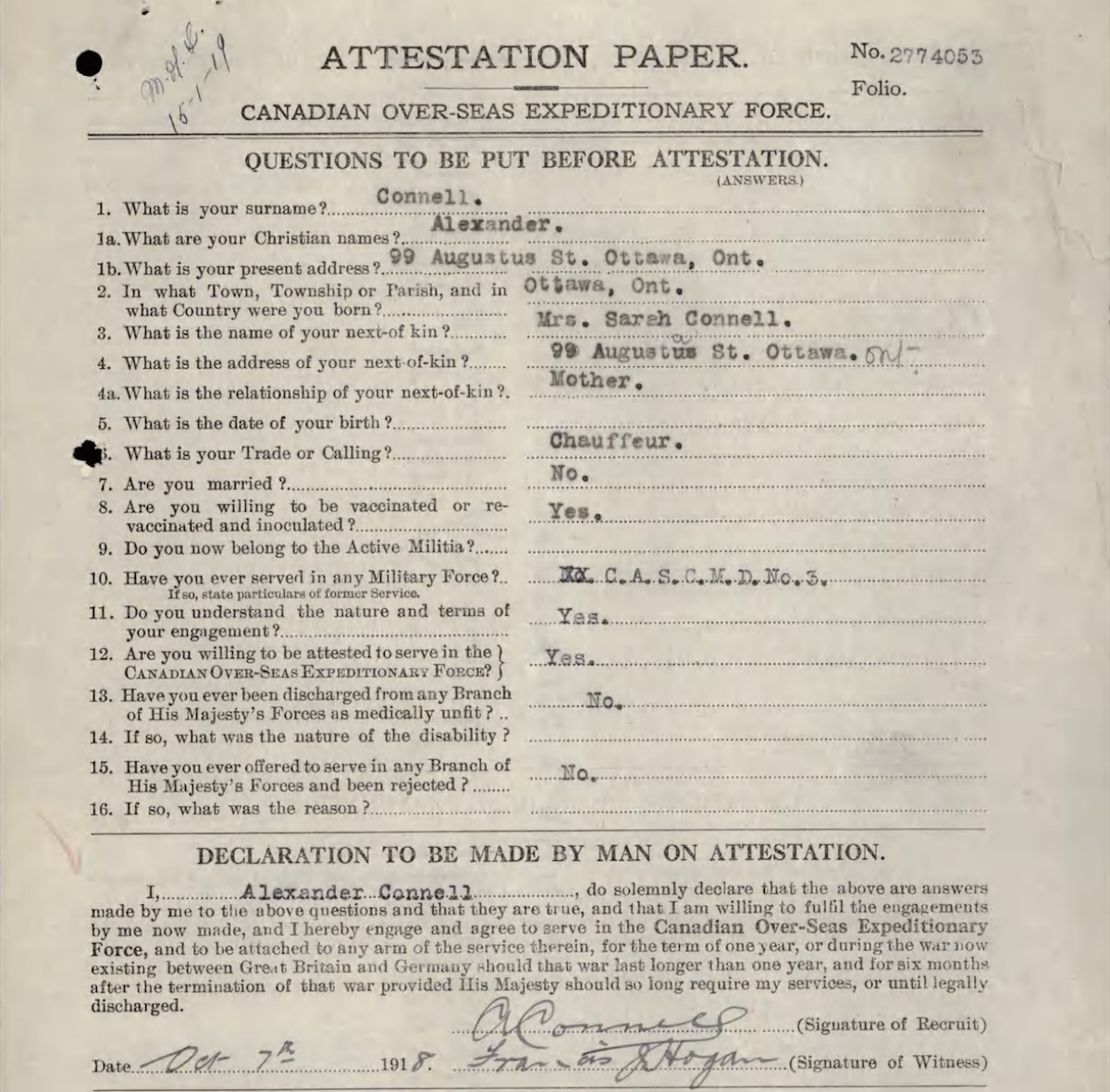 But in another Attestation Paper dated May 9, 1919, (which actually seems to be about the time that he was demobilized from the army) his birth date is recorded as 1899 February 8. 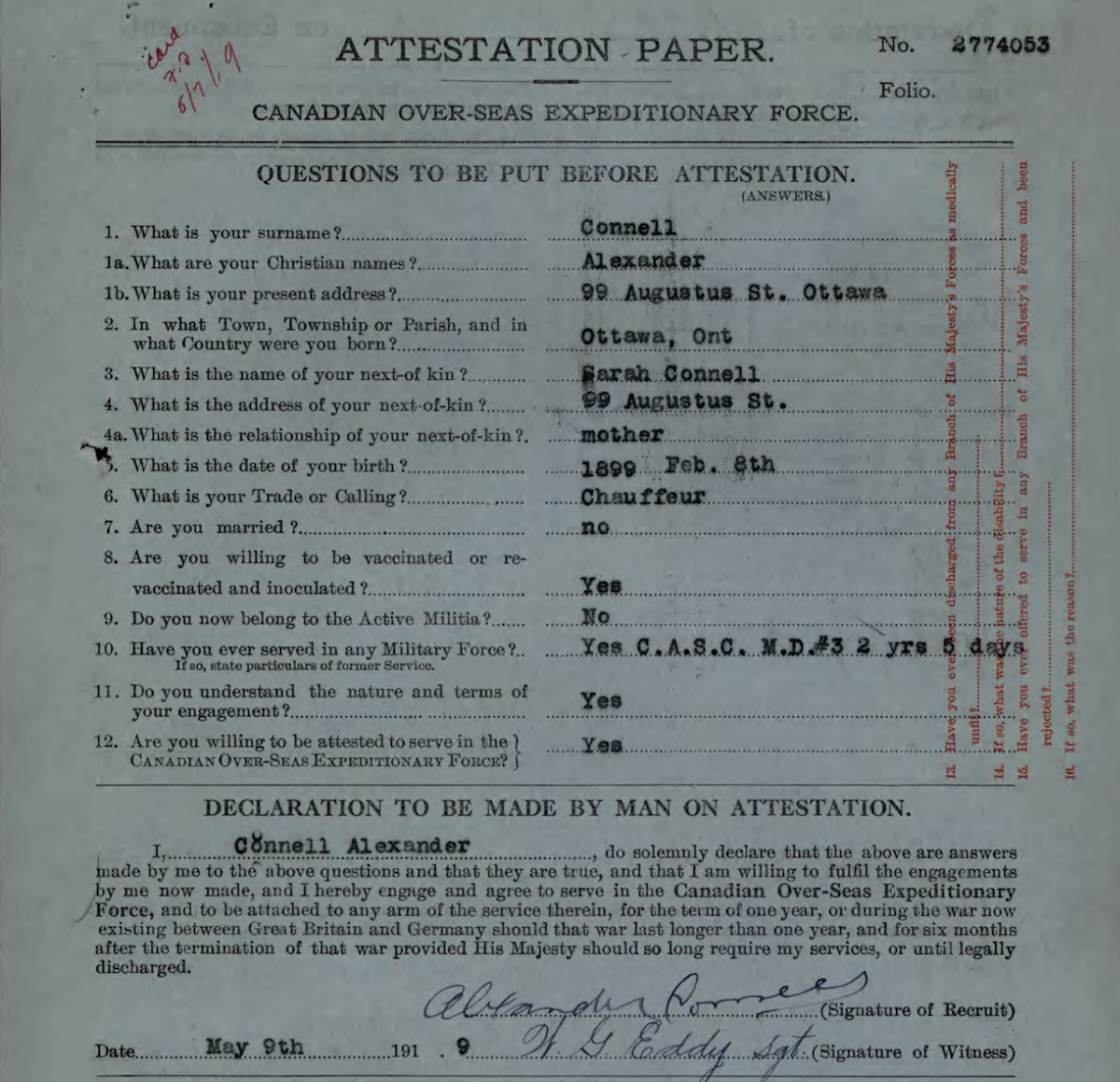 (For those of you noting that his Trade or Calling is listed as “Chauffeur” and knowing that his nickname was “The Ottawa Fireman,” Connell didn’t actually join the Ottawa Fire Department until 1921. And he wasn’t really a fireman. He served for 29 years as Secretary to a succession of Ottawa Fire Chiefs.)

So, was Alec Connell born in 1899 or 1900? The best evidence points to 1900, although this birth certificate wasn’t actually filled out by his mother until 1919: 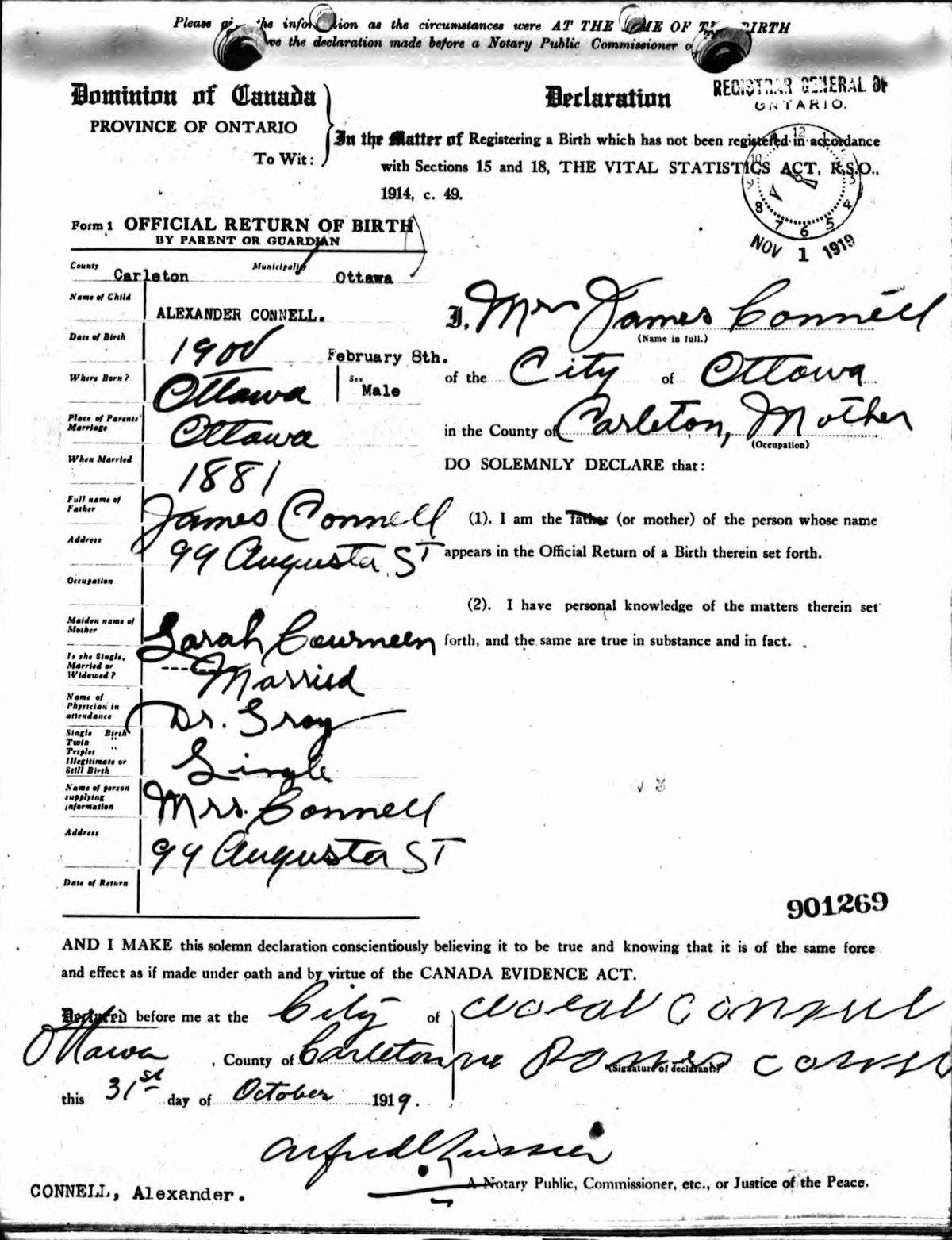 Most convincing is the record of his baptism at St. Brigid’s parish in Ottawa, which occurred on February 12, 1900:

Although it’s a little bit difficult to read, it says that Alexander Connell is the legitimate son of James Connell and Sarah Courneen, and that he was “born on the eighth inst.” Inst in this case being an abbreviation for the Latin instante mense, meaning a date of the current month.

So, happy 118th birthday Mr. Connell. And do you prefer Alec or Alex?

6 thoughts on “Another Birthday Mystery…”