Well, Canada is still alive for a medal in men’s hockey after a 1-0 quarterfinal win over Finland. With Germany upsetting Sweden, the path to a gold medal matchup against either Russia or the Czechs is a little bit easier. And on the women’s side, it’ll be Canada against the USA tonight in what promises to be a great game for gold.

The history of hockey at the Olympics predates the first Winter Games, which began in Chamonix, France in 1924. The first Olympic hockey tournament was held as part of a Spring Sports Festival prior to the 1920 Summer Olympics in Antwerp, Belgium.

Antwerp had bid to host the 1920 Olympics back in 1912, but no decision was reached before the outbreak of World War I. Shortly after the Armistice on November 11, 1918, the International Olympic Committee offered Antwerp the first choice to hold the Games in 1920 if the Belgians still wanted to do so. The move was seen as a way to honour the suffering of the Belgian people during the War. Belgium accepted. 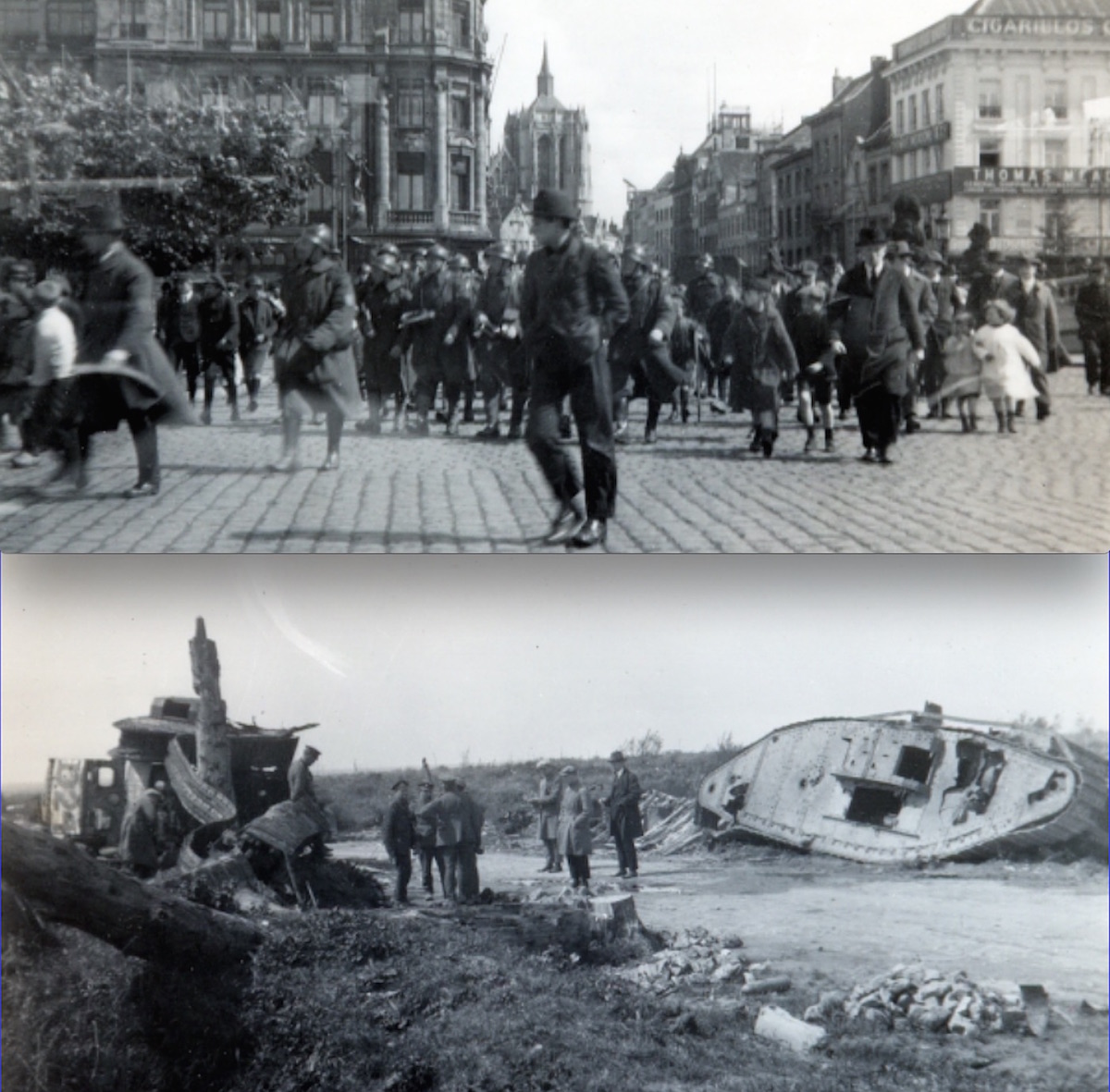 Antwerp was still full of soldiers in 1920, but the city was mainly in tact. The scene was much different when the Winnipeg Falcons, many of them war veterans, were given a tour of the Belgian countryside. All pictures are courtesy of Brian Johannesson, whose father Konnie Johannesson played for the Falcons. For more stories and images visit WinnipegFalcons.com.

On December 16, 1919, the official program and schedule for the Antwerp Olympics was announced. The bulk of the competition was slated for mid July until late September, but events would kick off in April with a hockey tournament. (Figure skating, which had previously appeared as part of the 1908 London Olympics, would later be added to the spring schedule.)

Canada was represented at the 1920 Olympic hockey tournament by the Winnipeg Falcons, winners of the Allan Cup as the country’s senior amateur champions. The United States sent an amateur all-star team made up of players from Minnesota, Pittsburgh and Boston. A few of the Americans were born and raised in Canada, but they’d played in the States for several years and become citizens after serving in the U.S. Army. 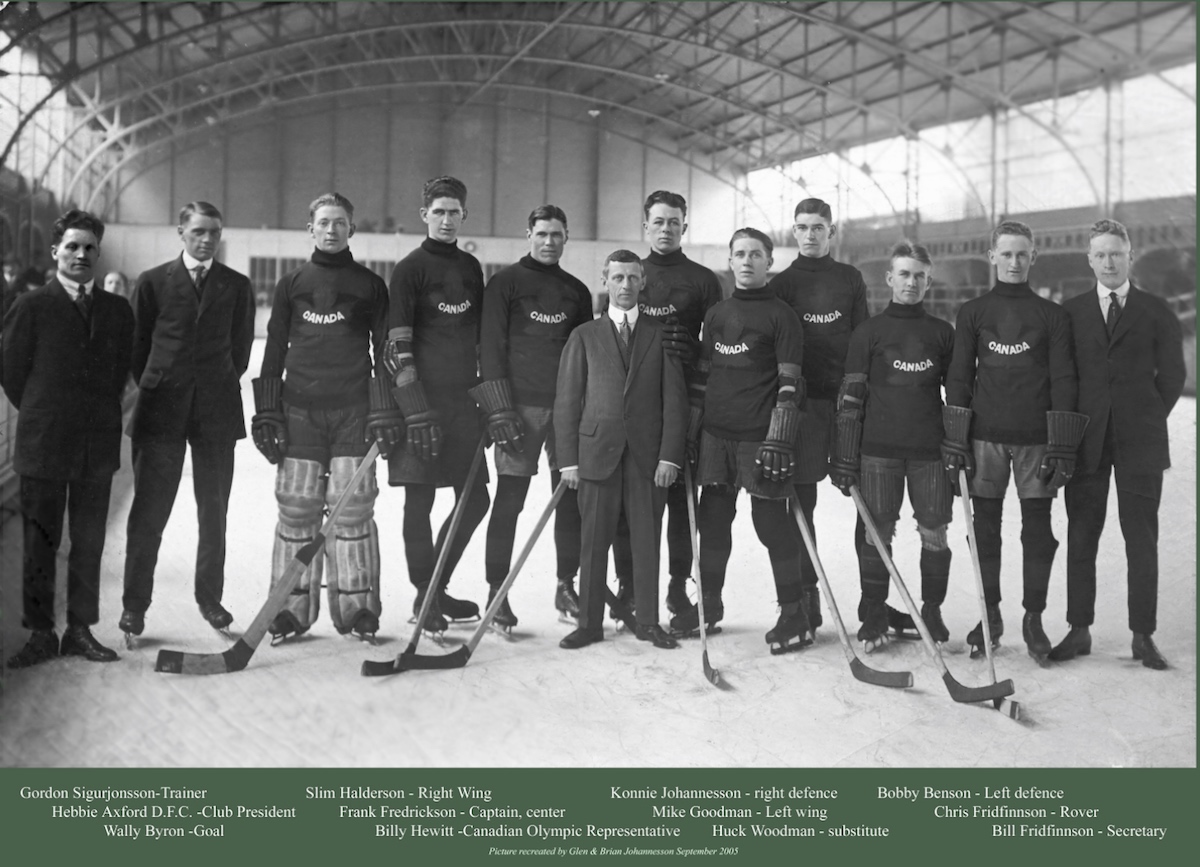 National teams representing Belgium, France, Sweden, Switzerland and Czechoslovakia were also at the Antwerp Olympics, but everyone knew the gold medal would be decided when Canada faced the United States. Due to the luck of the draw and an unusual tournament format, this occurred in a semifinal game on April 25, 1920.

The big game (as all the games were) was played at Antwerp’s Palais de Glace. It was a beautiful arena, but it hadn’t been built for hockey. The ice surface was only about 185 feet long and 59 feet wide. It was normally used for pleasure skating and it’s unclear whether or not the arena actually had seats. It did have tables and chairs, and could accommodate about 1,600 spectators – as well as an orchestra!

Canada versus the United States was going to be the greatest hockey game ever played in Europe, and it was a tough ticket. W.A. Hewitt (father of Foster) was the sports editor of the Toronto Star and an officer of the Canadian Amateur Hockey Association (among many other jobs). He served as the honorary manager of the Falcons in Belgium, and sent special reports on the games to the Winnipeg Free Press. “The game proved such an attraction,” wrote Hewitt of the Canada-U.S. matchup, “that the Palais de Glace tonight was unable to accommodate one-tenth the number of people who sought admission.

“The streets in the neighborhood of the rink were crowded from 6 o’clock, although the game was not advertised to start until 9 o’clock.  The doors were finally closed about an hour before the match…. Special squads of soldiers were employed to get the players into the rink … [and g]entlemen in evening clothes on the outside implored the players to allow them to carry their skates and sticks so that they could obtain admission. 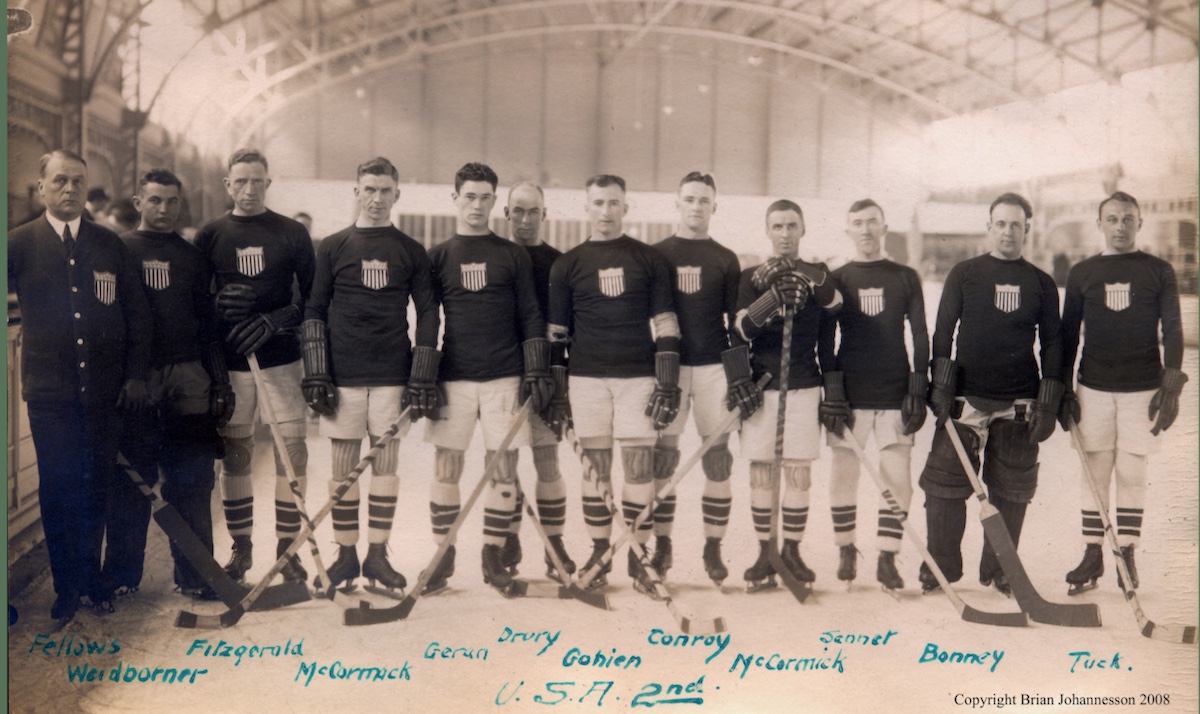 “It would have been a great joke to his Winnipeg friends to have witnessed the entry of Monsieur Mike Goodman, escorted by a detachment of soldiers and three men in full evening dress and top hats, carrying his skates, stick and grip – and they all got way with it, too, as valets to ‘Monsieur le Canadienne.’”

For those who got inside, the night was definitely memorable. “No one will forget easily the Sunday evening at the Ice Palace where [Canada] battled against the United States,” reads a translation of a Belgian recap of the tournament. “A full house, agitated [and] feverish, so much the public was sensitive to the spectacle and the intelligence inspired by this show of force.” 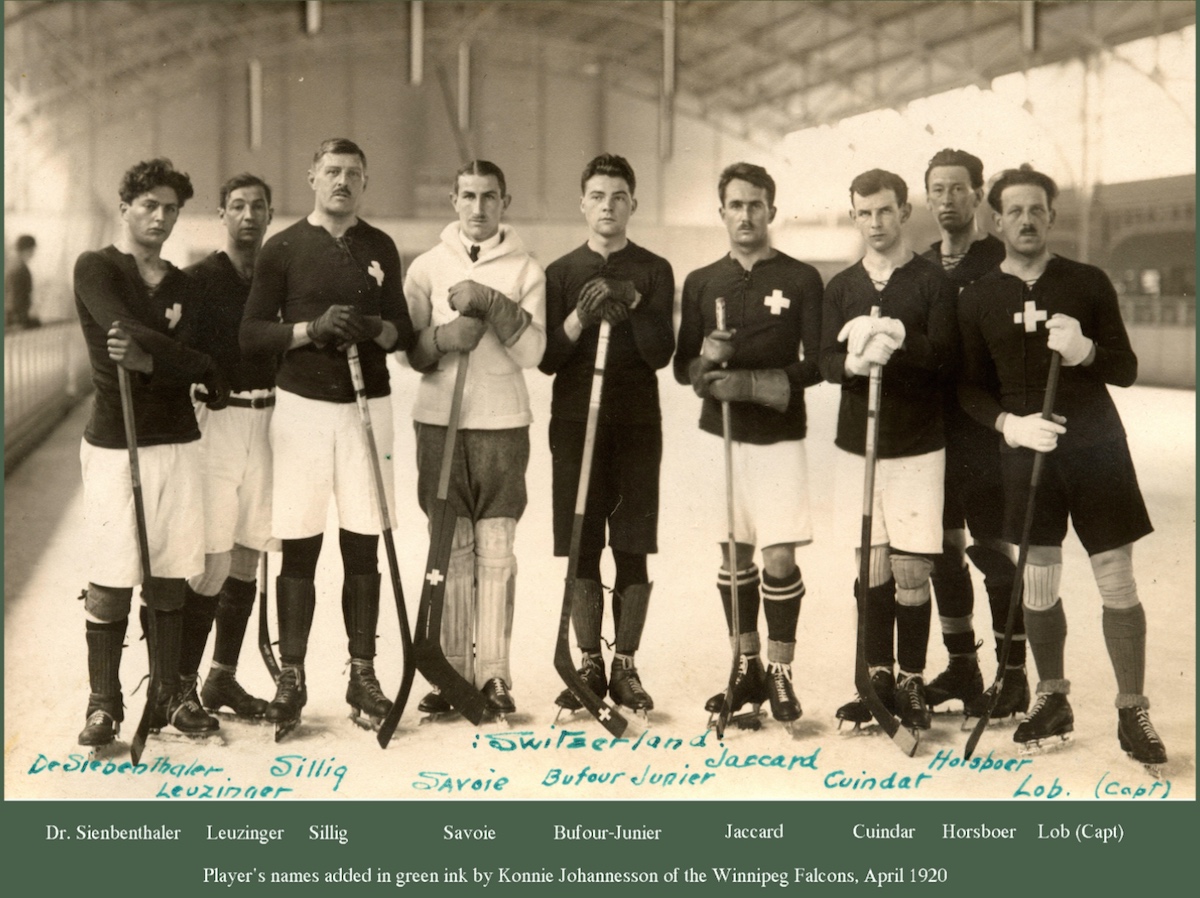 This image of the 1920 Swiss Olympic team is typical of what the European hockey
teams looked like. They’re dressed more like soccer players than hockey players.
The goalie is wearing a shirt and tie under his white sweater.

“I have never seen anything like this sports competition,” wrote a reporter for a Swedish newspaper. “Every single player on the rink is a perfect acrobat on skates. They jump over sticks and players with ease and grace. They turn sharply with perfect ease and without losing speed. They skate backwards just as easily as forwards. The small puck was moved at an extraordinary speed around the rink. The players fought for it like seagulls that flutter after bread crusts from a boat. The players attacked each other with a roughness that would have knocked you into the next week.”

The American team was supported by a number of USA army officers and their friends, but the Canadians were the crowd favourite. Belgian fans were impressed by the way the Winnipeg Falcons had taken time to work with the European teams. “One of the customs our boys instituted was to coach and assist all our opponents,” Hewitt wrote. The Canadians took it easy on the Czechs in a 15-0 win in the quarterfinals, whereas the Americans ran up a 29–0 score over Switzerland. “We tried to limit ourselves to 14 or 15 goals against the European teams,” Falcons captain and future Hockey Hall of Famer Frank Fredrickson would later say. “Believe me, it was difficult!” 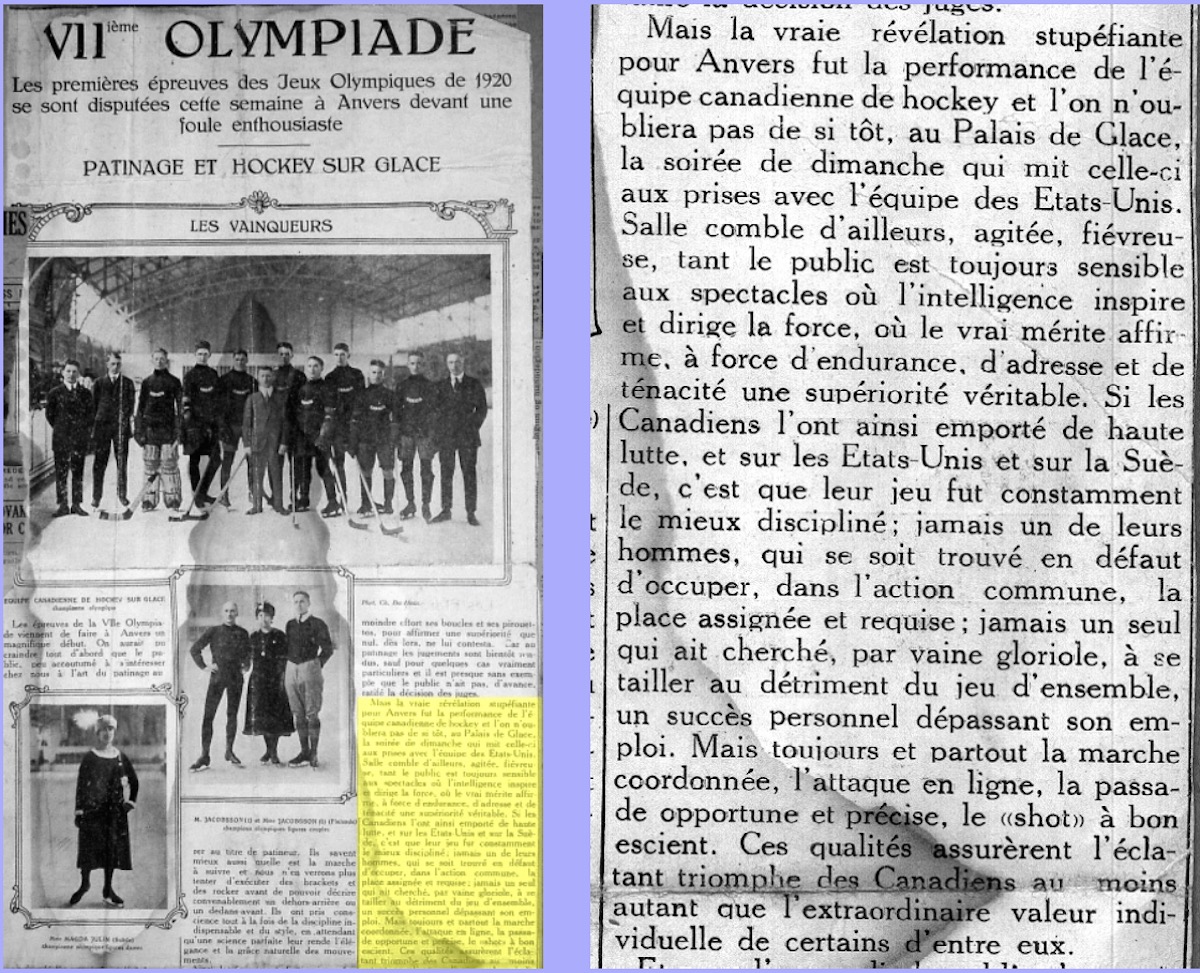 A recap of figure skating and hockey from the VIIth Olympiad in Antwerp in 1920.

The Americans were a strong team individually, but they weren’t a true team like the Falcons and that proved to be the difference in a 2–0 Canadian victory. “Their play was constantly more disciplined,” read the Belgian recap. “Never a single player looking for individual glory, these men, in their united action, playing their assigned and required places, never to the detriment of the overall play, a team success exceeding individual achievement.… These qualities ensured a brilliant triumph of Canada.”

The next night, Canada defeated Sweden to win the gold medal. The final score was 12–1. The only surprise was that the Swedes scored a goal. “They were without a doubt the best of the European teams,” Frank Fredrickson would say. “They were very friendly fellows and we liked them a lot. I guess it’s safe to say we gave it to them.”

In a very real way, the skill and sportsmanship the Winnipeg Falcons displayed in Antwerp in 1920 helped lay the foundation for the international game that hockey would become.

8 thoughts on “When Olympic Hockey Began”