Last week, on the night before it opened in Toronto, I attended a screening of Red Army – a documentary about the Soviet national hockey team. It was followed by a question-and-answer session with the director, Gabe Polsky, and Roy MacGregor of the Globe and Mail. I’m not sure how widely available this film is yet, but I known that it’s already playing in New York and Los Angeles and now Vancouver too. If it’s playing anywhere near you, go and see it! 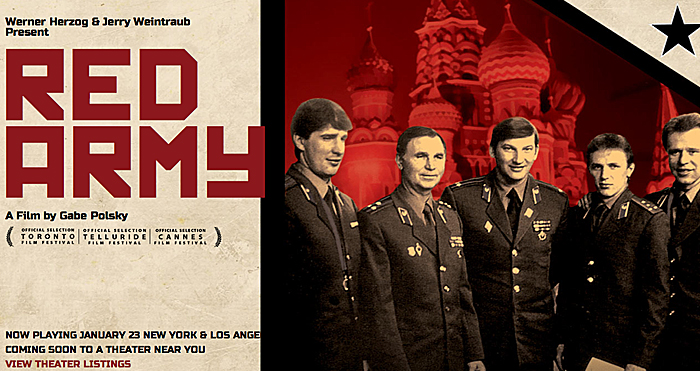 I won’t be the first one to say it’s not really a film about hockey. The director (who is an American) willingly admits it’s a movie that was made to show Americans about life in the Soviet Union by using hockey – and the story of Viacheslav Fetisov’s desire to escape the oppressive regime of coach Viktor Tikhonov.

I think most Canadian hockey fans of a certain age always knew that the Soviets trained 10 or 11 months of the year, and believed that they could be sent to Siberia if they failed – which seems to be true! – but I don’t think very many of us ever thought about how tough that actually was on the players and their families. Fetisov clearly loved his country, and loved being part of a spectacular hockey dynasty, but the story of how he eventually came to fight the Soviet system is fascinating … as is all of the vintage footage of life and hockey in Russia from the 1960s, ’70s and ’80s.

As a Canadian, my biggest complaint would be that if you watch this movie, you’d never know that we ever beat them! But that’s not really the point. As a writer, I hate when critics complain about what’s NOT in a book, so I hate to do the same about a film. Still, it could have included something about the 1987 Canada Cup – not because we beat the Soviets in probably the greatest set of hockey games ever played, but because that tournament is said to have been a real eye-opening experience for some of the key Soviet players who wanted the chance to leave their homeland to play in the NHL – which is what a great deal of Fetisov’s story is about. Perhaps this is something that could have been addressed by Igor Larionov, but Polsky told the audience in our Q&A that Larionov (and Sergei Makarov) would not speak with him. 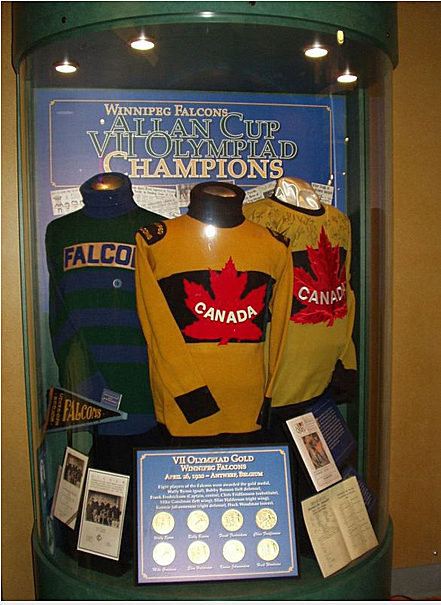 Also last week, I saw on TV the new Canadian heritage minute featuring the Winnipeg Falcons. Apparently, it’s been out since Remembrance Day (which makes sense!) but this was the first I knew about it. I’m a big fan of the Falcons’ story … which is, in a nutshell, about how the players overcame the prejudice against them in Winnipeg as immigrants from Icelandic families to become Canada’s first gold medalists in Olympic hockey. (My book Long Shot tells their story for young readers.) The heritage minute tells the story in 60 seconds. It plays with some facts and compresses others, but it does a great job of covering a lot of information so quickly. My one beef with it is pretty nerdy, but what can you do?

The Falcons are depicted in their dressing room prior to a game at the Olympics and are shown wearing pretty good replicas of the mustard yellow jerseys they wore for the tournament in Antwerp, Belgium. (These were not the team’s regular uniforms, but were specially designed for whichever team represented Canada at the Olympics.) Two other green-and-blue Falcons sweaters are shown on the wall in the dressing room, representing a couple of former players who died while serving their country in World War I. (All of the Falcons who were of age signed up.) The sweaters are a nice, artistic touch, and my complaint is not that these dead players probably never wore them (as I believe they were new for the 1919-20 season), but that it’s highly unlikely they were green and blue! 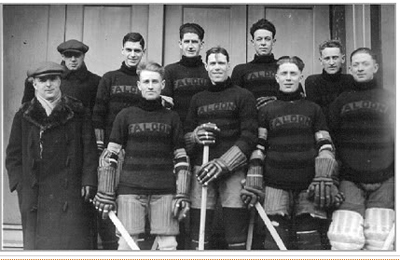 The fault (though that’s probably too strong a word) most certainly lies with the display honoring the Falcons that’s been at the MTS Center (and is shown above) in Winnipeg for several years. I’m not sure how they came up with those green and blue colors. All my research indicates that the Falcons pre-Olympic sweaters were actually orange with black stripes and collars … which I also happen to think is a much better match if you try to imagine the colors from the black-and-white team photograph. 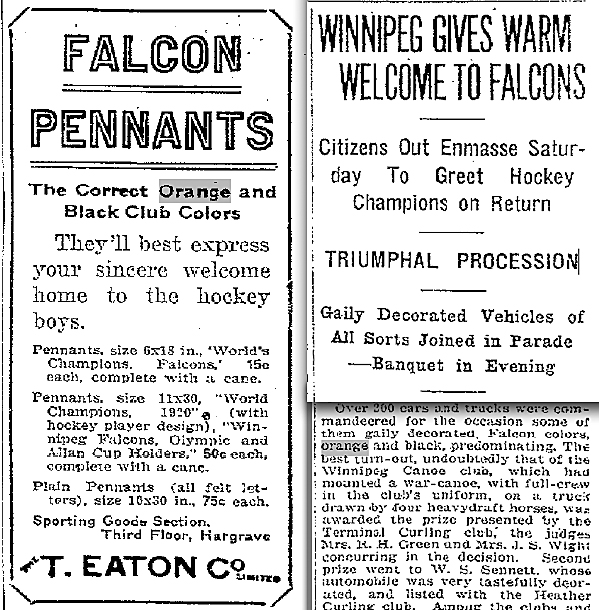 Like I said, a pretty nerdy complaint – but given all the research I’ve done on this team over the years, it would be nice if my reputation ever got to the point where more people think to call on me for things like this…

9 thoughts on “Upon Further Review…”