A month ago, I entitled my story about early hockey radio broadcasts, Hockey Nerd – Part II. This could easily be Part III, but I’ve decided I’m going to try not to refer to myself that way any longer. It was my friend and colleague Roger Godin who set me straight. In my recent story reviewing the film Red Army and discussing the Winnipeg Falcons heritage moment, I referred to my criticism of the Falcons jersey color as being “pretty nerdy.” Roger left a comment, saying: “Let’s rid ourselves of that description ‘nerd.’ Those of us in this business just want to get things right and frequently find ourselves up against a wall of indifference…”

Often times, the problem isn’t the indifference of others but the mountains of misinformation already out there. For example, if you ask people, “who was the first goalie to wear a mask?” most of those who’ll offer an answer will say, “Jacques Plante.” Plante was my first favorite hockey player when I was a boy and he was starring with the Maple Leafs. He had certainly popularized the use of goalie masks, but he wasn’t the first to wear one … even in an NHL game.

Before he wore one in game action for the first time on November 1, 1959, Plante had been one of many goalies (most of the others at the amateur level) experimenting with masks in the late 1950s. In September of 1957, Delbert Louch of St. Mary’s, Ontario, unveiled a “head-protector and face-shield” that caught on with many NHL goalies for practice, but proved impractical for games.

Long before then, a handful of goalies wore wire masks (like baseball catcher’s masks) in international competition in the 1930s, and many people know that Clint Benedict wore a mask with the Montreal Maroons in February and March of 1930 during his final season in the NHL. Benedict’s was a leather face shield he wore after being sidelined for several weeks following a couple of shots to the face that January.

The NHL had modernized its forward passing rules for the 1929–30 season, and just as the schedule was getting under way, Conn Smythe of the Toronto Maple Leafs stated that he planned to introduce a proposal at the next league meeting making it mandatory for all NHL goalies to wear masks. Smythe stated that there were several NHL managers in favor of the move, but no goalie wanted to be the first, so a rule should be adopted to compel them all to do so. 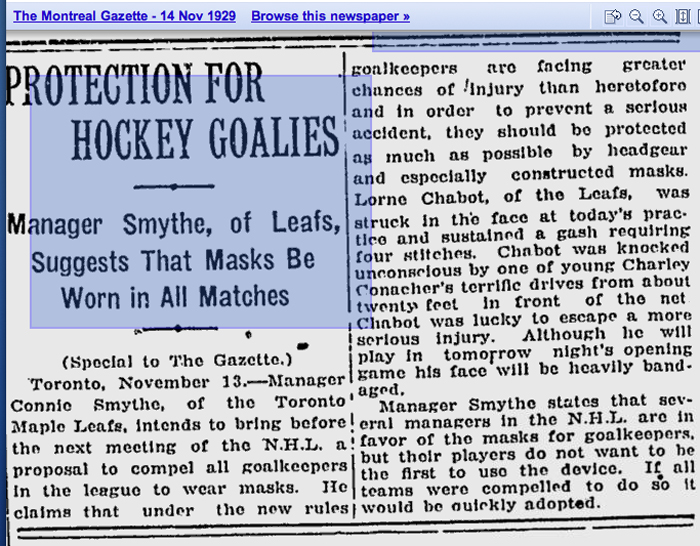 Apparently, the Ontario Hockey Association had passed such a rule for the 1920–21 season saying that goalies may wear a mask for protection though nobody appears to have done so. Despite what Smythe said in 1929, it would be many years before the NHL adopted similar legislation. Amazingly, even as late as 2009–10, the NHL rule book only said that: Protective masks of a design approved by the League may be worn by goalkeepers. The wording was not changed to say must be worn until 2010-11!

These days, the trendy answer to the question who wore the first goalie mask is Elizabeth Graham, who donned a fencing mask while playing net for the Queen’s University women’s team in 1927 … reportedly under pressure from her father who had recently paid for some expensive dental work. However, others had already worn masks before Ms. Graham. The earliest story I’ve come across about a goalie wearing a mask in a hockey game is from the New York Times on February 24, 1916. The Union Club defeated the Knickerbocker Club 14-0 the night before as part of a Charity Ice Carnival for the Belgian Relief Fund during World War I. Knickerbockers goalie J.G. Milburn Jr. was replaced after the first period by J.J. Higginson, who, the Times noted, “wore a baseball mask.”

Interestingly, in a story reported in the Regina Leader on February 8, 1912, the National Hockey Association (forerunner to the NHL) was said to be considering the use of face protection for goalkeepers “in the shape of a baseball mask,” which some clubs in the United States were already said to be using in practice. A story about roller polo – essentially hockey played on roller skates – in Pittsburgh in 1906 describes the goalie as looking much like a modern-day lacrosse goalie, and wearing a catcher’s mask. (Perhaps the fact that hockey was not nearly as widely popular in the United States as it was in Canada, and was played mainly at elite schools and swank athletic clubs, meant Americans were less hung up on the “manly” aspects of the game?)

Still, the earliest example I’ve come across of a goalie using a catcher’s mask and/or a leather face shield is from Canada in 1903. Eddie Giroux (often misspelled as Geroux in newspapers) was hurt in preseason practice with the Toronto Marlboros on a shot by teammate Tommy Phillips on December 9, 1903. When Giroux returned to the ice a few days later he was wearing some sort of facial protection. Here’s a quick summary of the newspaper accounts:

Whatever it was Giroux was wearing, he does not appear to have used it when the Marlboros played their first exhibition game in Barrie on December 18, nor in any games that followed during the 1903-04 season. He was said to be having trouble locating shots from the side while wearing it. Baseball catcher’s masks date back to the 1880s, and hockey goalies were quick to adopt cricket pads for added protection during the 1890s, but for now, Giroux’s brief experiment is the oldest usage of a mask by a goalie that I’m aware of. 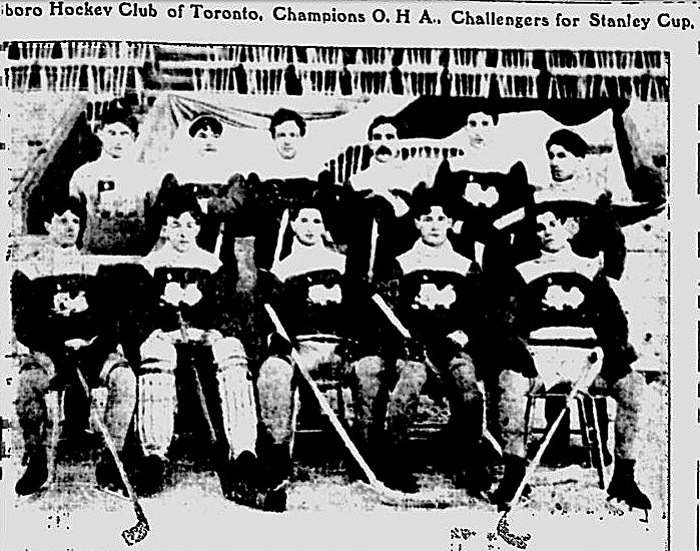 9 thoughts on “About Face”