Last week, USA Today reported that Pete Rose is hopeful the new Major League commissioner will meet with him to discuss his ban from baseball. Rose has already been cleared to take part in some of the All-Star festivities in Cincinnati this summer.

I came across the story below from the January 11, 1984 edition of the Montreal Gazette a little while back and found it very interesting. Particularly now. (Coincidentally, given my story two weeks ago about about the new Red Army film, the Gazette was also reporting that day that Canadiens GM Serge Savard was preparing for an upcoming trip to the Sarajevo Winter Olympics and was hopeful that Vladislav Tretiak would return to Montreal with him to play in the NHL after the Games. Tretiak, of course, never received the permission he needed from Soviet officials to join the Canadiens.)

Back in 1984, Pete Rose was a free agent after five years with the Philadelphia Phillies, which had followed his 16 seasons with the Cincinnati Reds. Rose would turn 43 that April, and his batting average had dropped from .325 in 1981 to .271 in 1982 to .245 in 1983. Still, with 3,990 career hits, he was just 201 behind Ty Cobb’s all-time record at the time and there was little doubt he was going to sign with someone. The Expos and the Seattle Mariners were the only teams on record as showing any interest. Ian MacDonald wrote that Rose expected to know if he had a deal to come to Montreal within the week. (He signed with the Expos on January 20.) What I found most interesting is what MacDonald wrote next:

“And a guy who picked both National Football League playoff games Sunday – and was “nine-for-twelve in the bowls” is worth heeding when he predicts that an announcement may be imminent.”

Obviously, nobody had a problem with Rose’s gambling at this point! To insiders (though certainly not to fans like my 20-year-old self) Rose was known to be a big gambler, and was often seen at horse races.

Rose got his 4,000th hit with the Expos early in the season, but was traded to Cincinnati in August and became the Reds’ player-manager. He broke Cobb’s record the following year, on September 11, 1985. Rose gave up playing after 1986 but was still managing the Reds in 1989 when his gambling problem became known to all. That August, he was banned from baseball for life for gambling on the game. He denied for years that he’d bet on baseball, but Rose finally came clean in 2004 … though he says he only ever bet on his own team to win.

Despite the many records he holds (some of which are listed below), Rose remains ineligible for election to the Baseball Hall of Fame. There is no indication yet that Commissioner Rob Manfred plans to change this. For more on whether or not Rose should be in Cooperstown, you can read a couple of interesting stories that appeared in The Atlantic in March and August of 2014. 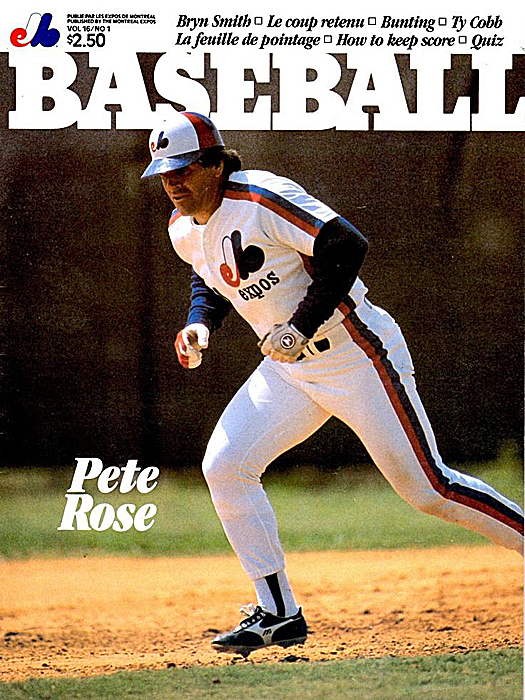 3 thoughts on “The Odds on Pete Rose”