Art Ross and Conn Smythe didn’t like each other. You’ll sometimes read that the feud between the two men was staged to sell tickets. It certainly seemed to help the box office, and maybe they played it up in the years after World War II, but it seems to me that they truly disliked one another throughout the 1920s and ’30s.

There are many theories as to what sparked this hatred. I go into greater detail about much of this in my book Art Ross: The Hockey Legend Who Built the Bruins, but the leading contenders seem to be:

These and many other petty reasons no doubt added up, but I think they were just two strong personalities who each wanted what was best for themselves and their team and damn anyone who got in the way.

One of the last great flare-ups in the Ross-Smythe feud occurred on this week back in 1939 when Conn Smythe showed up at the office of the Boston Globe. The defending Stanley Cup champion Bruins would be the NHL’s highest scoring team by far during the 1939-40 season, but Smythe was spewing venom about the Boston’s boring defensive play in a 1-1 tie in Toronto a few days before. As quoted in the Globe on December 19, 1939:

“First of all, I want to put a paid advertisement in your paper to let the fans of Boston know that they can see at least one great hockey team in action [to]night.”

“Mind you, we’ll get no financial return from this ad because the visiting club doesn’t get a share at all in the receipts. But if we’ve got to carry the whole National League while the other clubs fall asleep and try to scare the customers away, then we’re willing to put out the dough.

“I’m referring particularly to that game the Bruins played in Toronto last Thursday night. That, my friends, was a living disgrace. It was a perfect exhibition of how to drive the customers away in droves. Sure, I know the Bruins have lost Eddie Shore and Roy Conacher, but they’re still the champions, aren’t they? Everybody calls them champions. Why can’t they play like champions then, both on the road and at home?

“We have anywhere from 500 to 1000 fans from Kitchener every time the Bruins are in town to see the Sauerkraut Line. All they saw last Thursday night was the ‘Sauer’ part…. I guess Ross is so busy inventing things that he doesn’t find time to make his players play hockey… Well, if that’s the way they want to play, we’ll carry the load and show the customers hockey as it should be played.”

Smythe’s outburst helped to attract a crowd of 14,107 to the Boston Garden that night. It was the largest crowd of the season to that point, and they saw the Bruins score a 3-2 victory in overtime. Ross later demanded that the NHL fine Smythe $1,000 for his conduct. The issue was raised at the next league meeting, but was dismissed. Instead, a motion was passed censuring both Smythe and Ross for their unseemly bickering over the years. 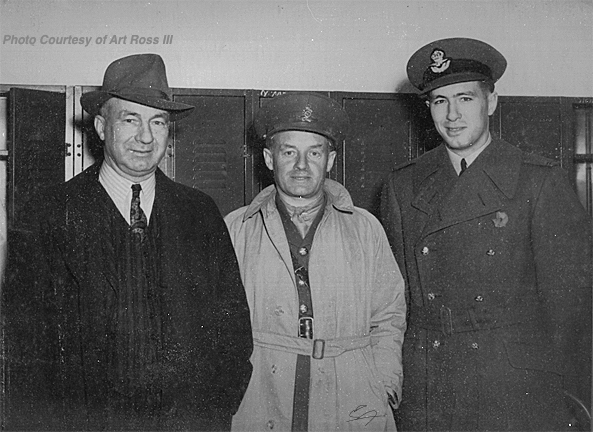 Soon after, Ross’s sons Arthur and John enlisted in the Royal Canadian Air Force. Smythe was a World War I veteran who would re-enlist during World War II. “I was a little sorry about having been on [Ross] all the time when his sons came up and joined the RCAF,” Smythe would write in his autobiography. “We weren’t so hard on one another after that.”

The feud did seem to abate as the years went by, though the two men probably never liked each other much. Perhaps, though, there was at least some level of mutual respect. At the end of my book, I mention a telegraph that arrived at the Boston Garden following Ross’s death on August 5, 1964. Here it is:

And, in light of the recent decision by Baseball Commissioner Rob Manfred on Pete Rose, a link to my story from February 18.

1 thought on “The Ross-Smythe Feud”