Congratulations to the Pittsburgh Penguins, but although it’s already been a few days, it didn’t seem right to write about anything other than Gordie Howe this week.

I only met Gordie Howe once, back in 1993 when I worked at the Hockey Hall of Fame. I’ll admit, it didn’t have the same feeling of meeting royalty that my similarly brief encounter there with Jean Beliveau had. It felt more like being with your favorite uncle. Like he already knew you and was happy to share a funny story. (We were standing near the Stanley Cup, and he was grumbling good-naturedly about how he’d only won it four times, while Henri Richard had won it 11 times.)

Gordie Howe set records in his day that seemed unbreakable. Some of them never have been. Still, it’s interesting to note that,  before the nickname made its way to him, there were several men who were already known as “Mr. Hockey.”  As early as 1933, it seems that Conn Smythe was going out of his way to discourage New York writers from considering Lester Patrick to be Mr. Hockey. 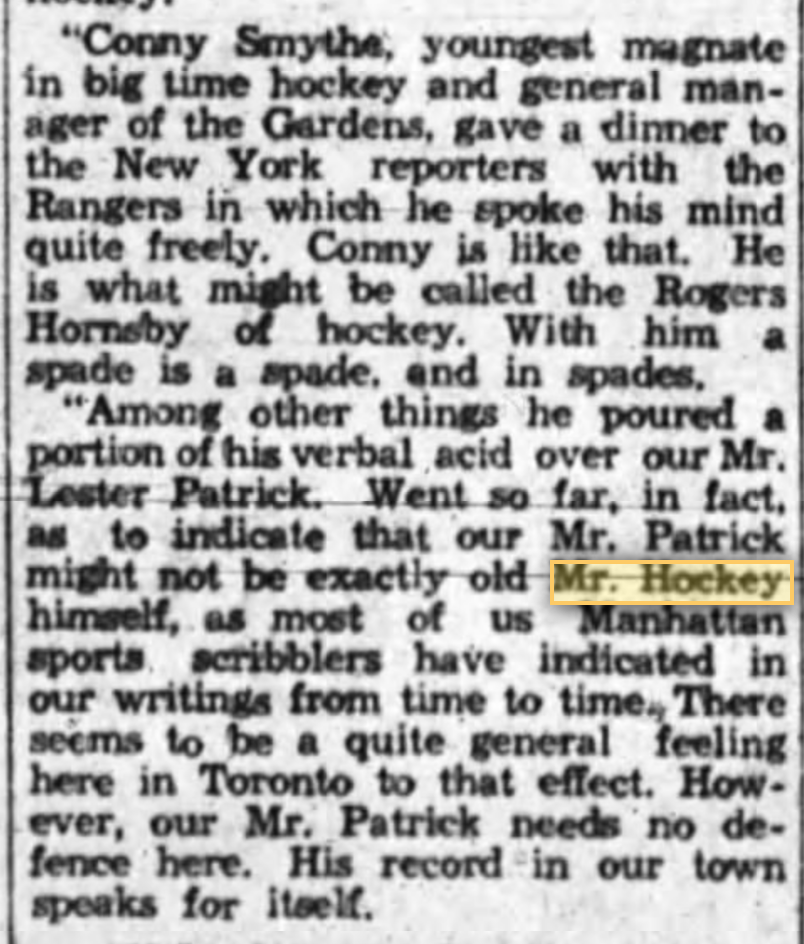 In my research for my book on Art Ross, I came across several references to him as Mr. Hockey … in the Boston-area, anyway. And Bruins great Eddie Shore was also known as Mr. Hockey “everywhere the game is played.” 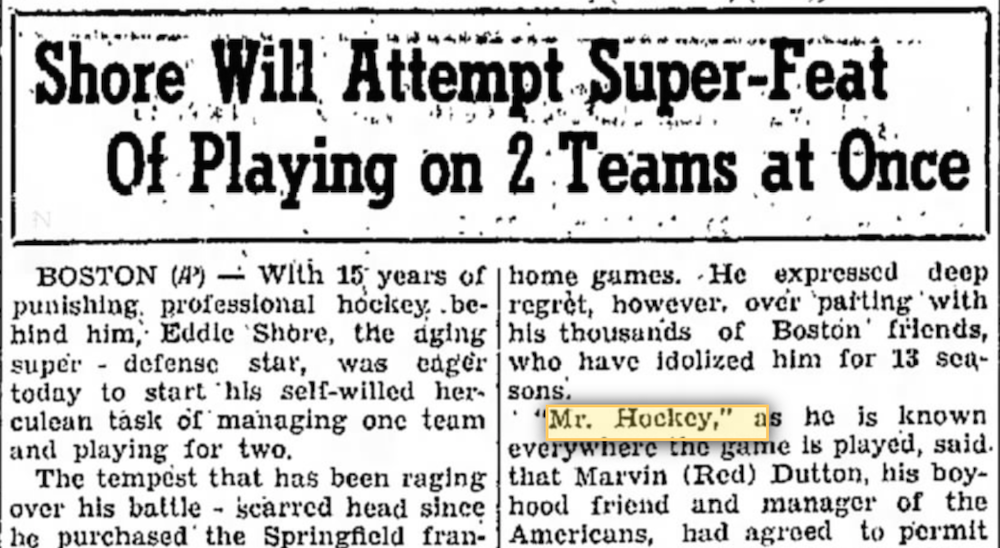 Even in Detroit, Jack Adams was known as Mr. Hockey long before anyone in town had ever heard of Gordie Howe. Adams, who was coach and/or general manager of the NHL’s Detroit franchise from 1927 to 1962, was dubbed Mr. Hockey in the early 1940s. 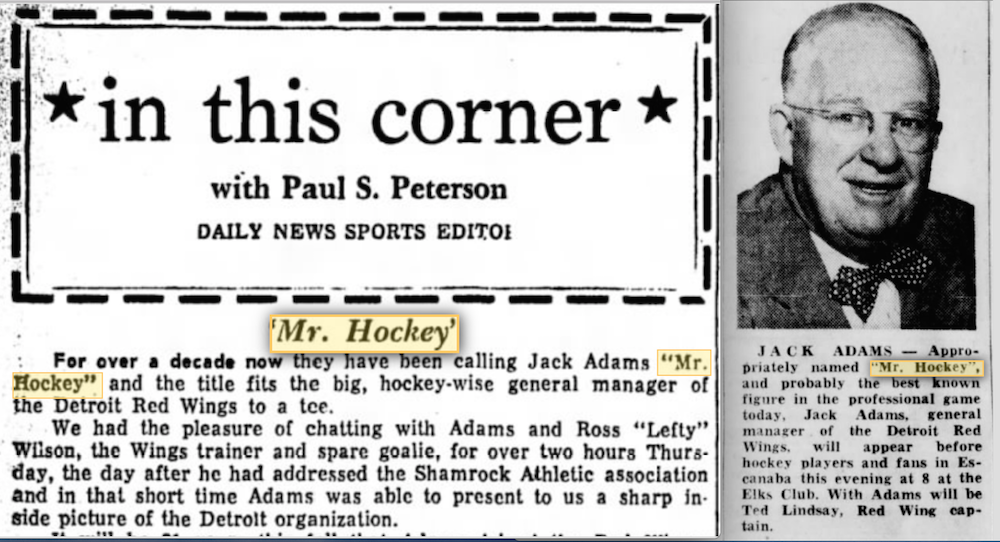 Jack Adams is referred to as Mr. Hockey in a couple of Michigan newspapers
in the 1960s; The Ludington Daily News and the Escanaba Daily Press.

The earliest reference to Gordie Howe as Mr. Hockey that I’ve come across dates back to March of 1953. Nels Stewart (an NHL star of the 1930s and ’40s) was referring to the fact that while Maurice Richard might have recently surpassed Stewart’s NHL record of 324 career goals, Howe would likely pass them both some day.

The story on the left appeared in Toronto’s Globe and Mail on March 7, 1953.
The one in the right was in papers across North America on October 21, 1957.

But Stewart’s quote seems to categorize Howe as just one of several Mr. Hockeys, Maurice Richard among them. The name doesn’t really seem to attach itself to Howe until after Jack Adams retired from the Red Wings in 1962, as I haven’t been able to find it again in reference to Howe until 1963. And, really, it doesn’t seem to come into widespread use until after Adams died on May 1, 1968. 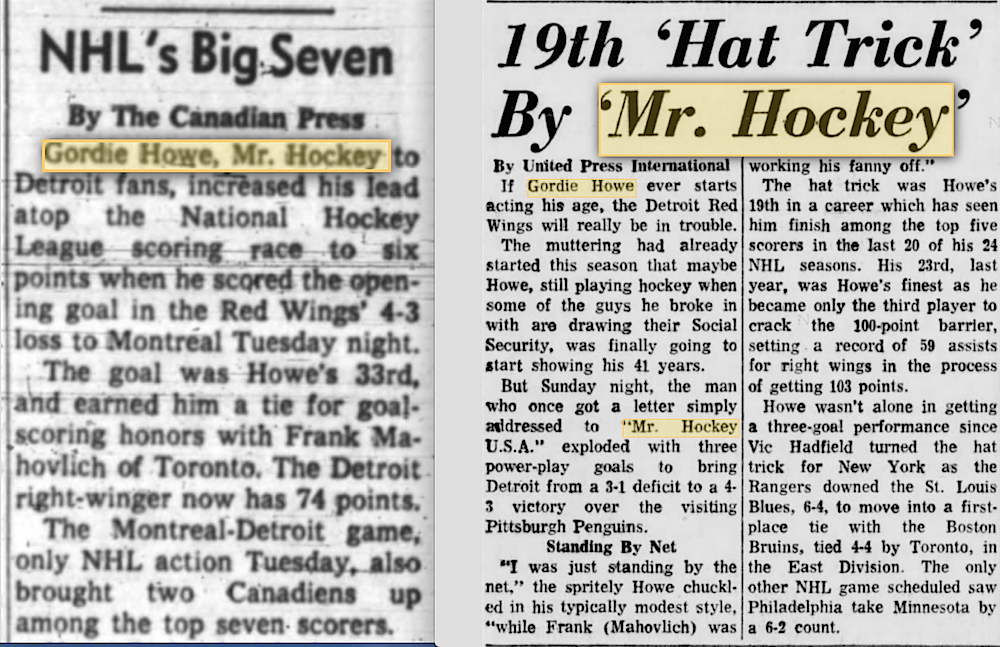 Others have already written about this since Friday, although I’m not sure I’ve seen it put as directly as I’m about to right now: Gordie Howe is the reason we think of hockey players at their best the way we like to. The stereotype – which is generally true – is that hockey players are more approachable than other athletes; and we like to think of the best of them as being as tough as they are talented on the ice, but always humble and accommodating off of it.

That was Gordie Howe. He truly was “Mr. Hockey.”