Well, it’s June 22 and the weather in these parts has gotten pretty summery – though it’s a little bit cool today. But it’s Canada so there’s still a lot of hockey going on. The Leafs made a big trade for a goalie this week, expansion to Las Vegas is expected to be announced, and the NHL Awards from there will be handed out tonight. Still, the biggest news (though as yet unconfirmed) is that Ron MacLean could be back as host of Hockey Night in Canada, replacing George Stroumboulopoulos.

I do enjoy watching Ron MacLean on television, and, personally, he’s been very nice to me. I’ve never met Strombo, but if truth be told, I think he did a decent job … I just don’t like his sports-hipster style. And it seems that I’m not alone. Even so, Strombo isn’t the real problem. As Vijay Menon said in the Toronto Star yesterday, would the TV ratings for hockey these days be any different “if HNIC were co-hosted by the ghost of Foster Hewitt and Paulina Gretzky in lingerie?”

Ratings are off (sorry, rest of Canada) because the Leafs have been terrible. And it didn’t help that no Canadian team made the playoffs this year. Yet the biggest problem is that the game isn’t as much fun to watch as it used to be. And that’s not just cranky “the game was better when I was a kid” talk. Yes, players are bigger, stronger, and faster than ever … but I’m not the first one to suggest that maybe they’re moving too quickly now. So fast, in fact, that there’s not enough time to be creative with the puck. There’s not much room for it either. The result is that not enough goals are being scored.

I’ve written about bigger nets, and 4-on-4 hockey in the past, but really, if I could do anything I wanted to fix things it would be to reduce roster sizes. The Players Association would never let it happen, but if teams could only dress 10 forwards and 5 or 6 defensemen (like they used to), the game would slow down a little bit, which would open up more space and allow for more time so we’d see more goals scored. But since that’s impossible, all we’ll get is yet another minor reduction in the size of goalie equipment. It’s better than nothing, but this is an issue that goes back a lot further than you might think.

Take a look at this cartoon from the Pittsburgh Press on March 22, 1908. 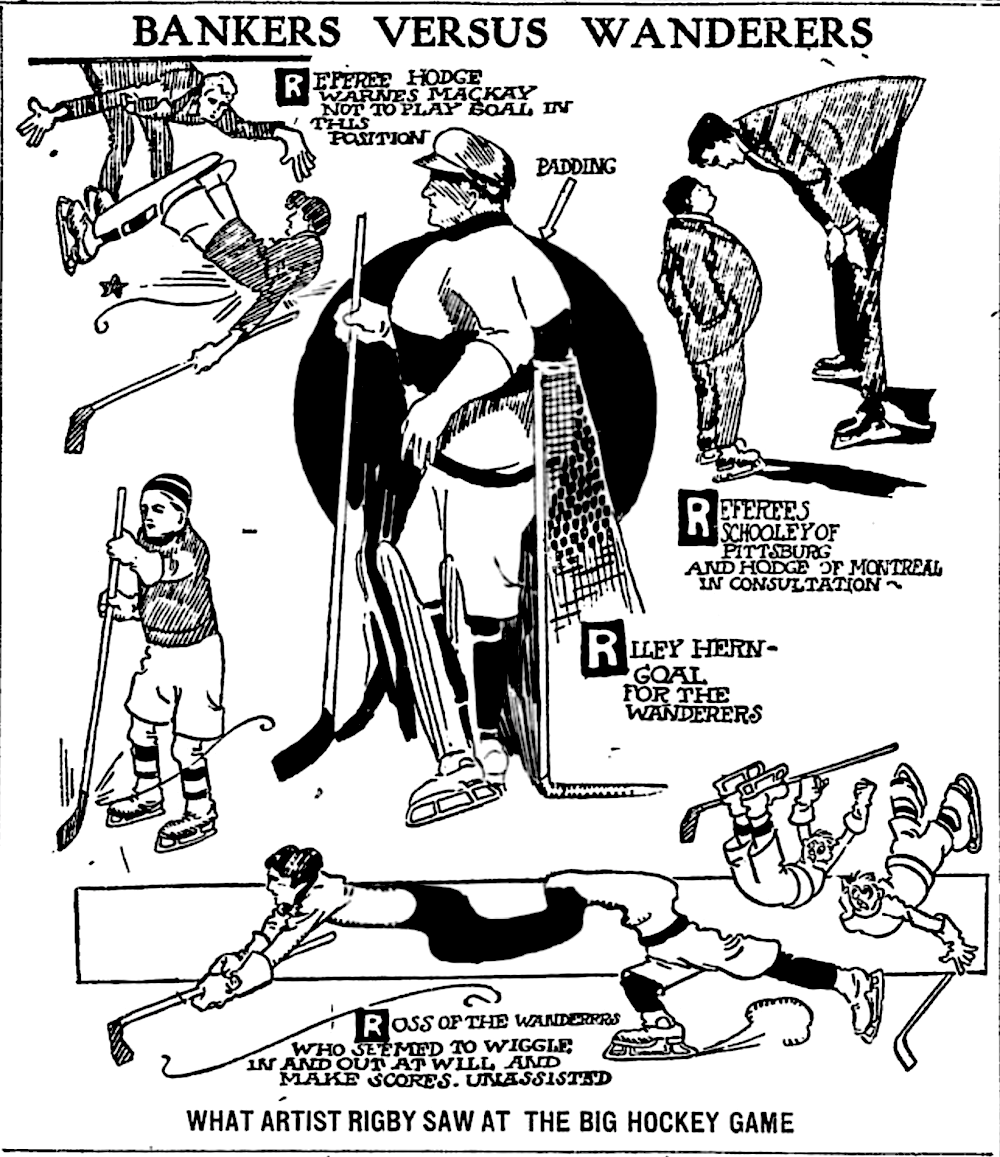 I posted the segment at the bottom of this drawing, showing Art Ross and his wiggly moves, on Facebook recently. Today, however, I call your attention to the central feature – Montreal Wanderers goalie and future Hockey Hall of Famer Riley Hern.

Despite the fact that he wears skinny cricket pads, regular playing gloves, no mask (but a jaunty hat!), and is not allowed to fall to the ice to make a save (note the illustration in the top left), clearly what struck Artist Rigby about Hern was the bulky padding he was wearing on his upper body. He looks like a modern lacrosse goalie … or the Michelin Man, as hockey goalies these days have sometimes been called. As it so happens, it’s the size of goalie pants and upper-body protection the NHL plans on slimming down next season.

And check out the “giant” goalie stick Riley Hern lent his name to in this Spalding ad from 1909. 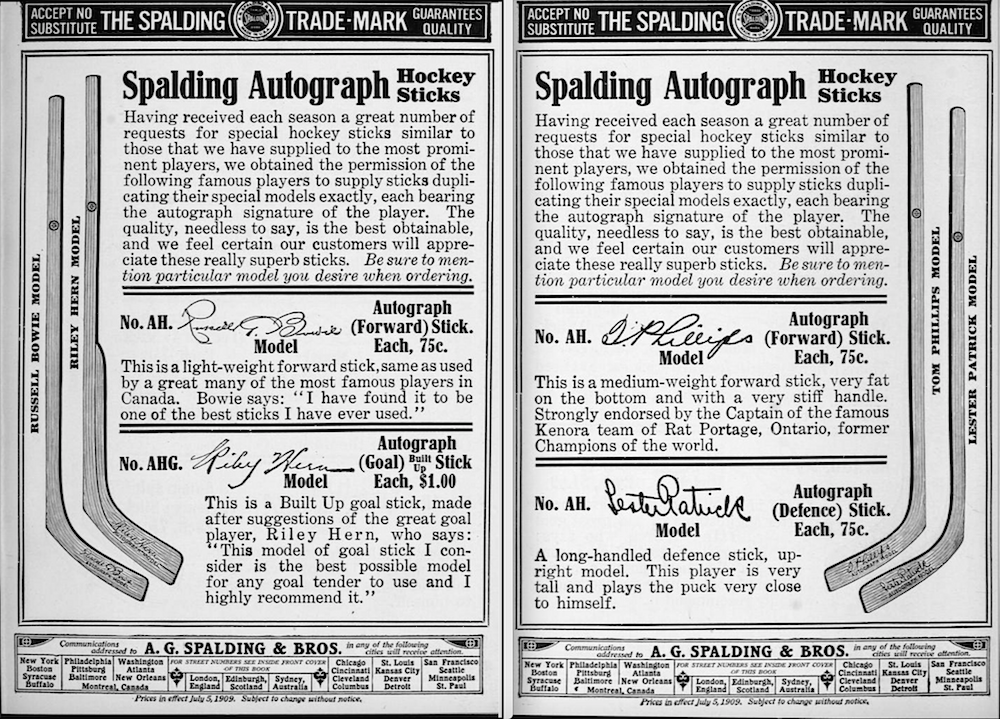 No one’s going paddle-down with that … although, in truth, my real point in displaying this ad is just that I think it’s amazing that future Hockey Hall of Famers were marketing their own brand of sticks as early as 1909!

11 thoughts on “The More Things Change…”